Well, apparently the answer is yes. Almost a year or so ago, the BH and I decided to finally try the little restaurant inside the strip mall very near our home. It used to be a Hof Brau and had been recently re-modeled into a Sushi joint. We saw the "Grand Opening" sign, but the BH was really intrigued by the "all-you-can-eat" flyer that had been sent to our home. Since limitless food is like a siren song for this man, I agreed to accompany him to the restaurant as an experiment in dining.

We found the interior of the restaurant, called Ninkimono, pleasantly surprising. Classy, sleek and black, it was more San Francisco than it was "strip mall Newark." The tables are all equipped with gas flames, that are used in the preparation of Shabu-shabu. We had never tried this before, but since at our first visit it was part of the "all you can eat" offer, we tried it on our first visit. Diners are brought large plates of vegetables and meats, intended to be cooked in a tub of boiling broth. It was tasty, but nothing that really rocked my boat. Next we tried a variety of the fancier sushis. We didn't come close to finishing any of it, of course.

On the next visit, they were no longer offering the carte blanche all you can eat meal. They had altered the menu to an extremely confusing set of choices for various fixed prices, some of which included the Shabu-shabu. The "all you can eat" menu seemed much too prone to abuse, and given the amount of food wasted on our first visit, an entirely understandable decision on the part of management on many levels. It had to be much to expensive to keep indefinitely. However, it did seem that they were still feeling their way as to what amounts to charge for what sort of meal. To date, I am never sure when we go if the menu / cost options will have changed, again.

At least for my darling BH and I, that initial all you can eat experience allowed us a really unique opportunity to sample types and preparations of sushi rolls and specialty dishes we would never have otherwise tried. Ever since, we've kept quite a few of them on our regular menu when we dine there. 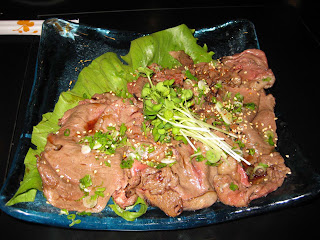 The last time we went, we ordered several of the dishes we had learned to love on our first visit. We began with traditional salad and miso. The miso was okay. The salad had the dressing flavor just right, but the lettuce was drenched. Unfortunate beginning, but we just won't order either again.

Next we had one of our favorites, Beef Carpacchio (a platter of paper thin slices of barely cooked red meat and a lovely sort of "au jus" to dip it in). It is really a lovely blending of the flavor of good red meat, and the slight hint of juices that enhance that flavor. I really love this dish. Way more interesting than the Shabu-shabu and of course, I don't have to try to figure out how to cook it myself. 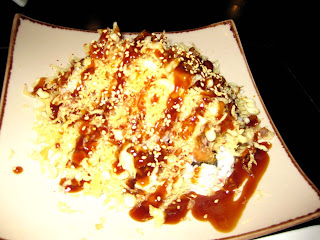 We next received our Snow Rolls (a lovely tempura covered mess of crab meat and tasty goodness), which are a solid sushi roll smothered in a crunchy and light fried tempura batter topping. At least that is what it appears to be, I haven't actually asked the sushi chef. The snow rolls were quickly followed by a tray of bacon wrapped scallops. These were good, the bacon was fresh and I love a good bacon wrapped anything, but they weren't extraordinary. But that sorta figures, since it's not a dish normally associated with sushi. We finished off the meal with an Orange Blossom Roll and a traditional Spicy Tuna Roll.

Since the BH doesn't really do the "spicy" thing, the latter was mostly for me. I have to say it was very well done. This guy is a solid sushi master. The tuna roll was nice and spicy, without overpowering the flavor of the tuna too much. But the Orange Blossom was a real delight. Presented as petals of an orange blossom (of course), the dish consists of several large pieces of salmon slabbed over rice with some tuna. The flavors were more subtle and unusual than any other sushi roll I have tried. There was a hint of orange peel, but it wasn't bitter it was sweet. It was extremely light and delicate, as though the dish were flavored with the "essence" of orange and not the juice itself. Outstanding dish. 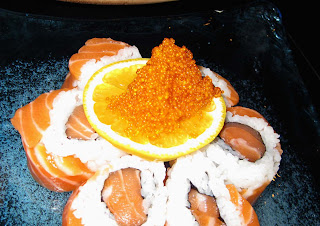 Other dishes we love, but didn't have on this occasion are the Godzilla Roll, or the Raiders Roll. The latter is not a roll, but is scallops cooked hot in foil, wrapped in something delicious. I can't remember all the ingredients, so will update later, I just know I love it.

I think that if this restaurant ever figures out it's own marketing, it will be outstanding. I believe they have a first class sushi chef here, but maintaining a restaurant of this quality in the suburbs where people are used to eating a fast-food burger more often than not may be a challenge, particularly in this climate. I hope they make it.

Price: Moderate - Expensive (as with tapas, depends on how much is ordered)

Dining time: Could easily get out in an hour