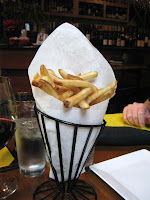 Not every trip to a restaurant is equally memorable, but then not every trip out is experienced equally. Tonight we were in a hurry. We had a show to get to, and although we had left plenty of time for a fairly leisurely meal, the gods were having none of it.

We arrived at the San Pedro Square Bistro & Wine Bar early enough, we hoped, to catch a real cocktail nearby. We like a good margarita or two before a show. But there was nothing in sight, although ironically there was a closed Mexican Restaurant right next door. Maybe that should have been a sign. 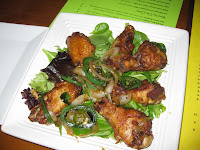 We sat down and the waitress took our appetizer order. Since we were unable to locate a cocktail, I went with a Malbec they were serving by the glass and it was to my liking. We ordered the Garlic Shrimp, French Fries and the Chicken Wings. The shrimp was tender and the sauce a golden garlicky-goodness. The dish itself was appetizingly plated. The Chicken Wings (which were technically drummettes) were piping hot and had a nice barbeque flavor. Best of all, they were part of the evening happy hour appetizer menu, and were only $4.

Overall, I think the best offering was their fries. Served in one of those lovely paper cones to absorb some of the grease, the fries arrived steaming hot right out of the frier, and were accompanied with three really aromatic and complimentary dipping sauces. The first aioli was a lovely sun-dried tomato, another was a spicy wasabi and the last was aioli blended with a tapenade of olives. All three dips were clearly distinct from one another and offered a really and tasty variety of flavors against the steamy potato wedges. The fries made a really good impression on me and were a big hit at our table. 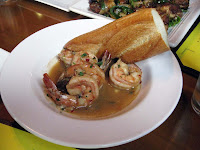 But then there was the wait. And the wait. It must have been a full thirty minutes from the time we had finished our appetizers until we could again get the attention of the waitress, and then she was forced to ask for a few minutes to finish up with other patrons before she would be back to take our order. I felt badly for her. She was polite (but harried) and it was clear that they were slammed at the restaurant and ill-prepared for the sudden rush of business. We were on our way to Cirque du Soleil and there was also a tennis match of some sort across the way. But none of that is the patron’s fault, and when a restaurant can’t take care of you, it’s off-putting. I think maybe it’s because you are so completely helpless. You can’t get your own water, or your own drinks, and obviously you can’t just head to the kitchen to put in your own order. Couple that with the fact that we had a deadline hanging over our heads in the form of an eight-o’clock curtain, and well, it was pretty stressful. Dining just isn’t as good when one is all stressed out.

The waitress made it back in another five or six minutes. We placed our orders and hoped we had enough time. We had a little leeway since we hadn’t managed a bar stop on the way to the restaurant. One of us decided on the Chicken Vostadana. Though the restaurant has named it differently, I believe the dish was in reality Chicken Saltimbocca. The name change might have been because the dish is more traditionally done with veal. It might have been a nod to it being a variation by the chef or a family member. But the ingredients are chicken layered with prosciutto and cheese and a touch of sage with butter. That’s a Saltimbocca if ever there was one. 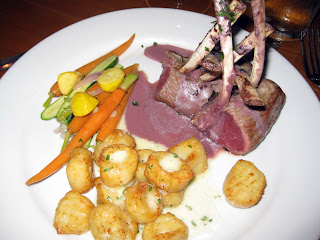 I had a Rack of Lamb with Gnocchi. I ordered rare. I shouldn’t have. My BH let me know he almost warned me off. I forget that rare in beef and rare in lamb are not the same. I’m so used to getting overdone lamb and it really needs to be pink to be good, but if it’s completely raw, which this was, it’s almost inedible. Although they technically executed the dish the way I asked them to, a good server would have let me know that rare is a raw in their establishment and at least made sure that was my intent. Lamb just can't be eaten raw.  It was the costliest dish on the menu, you’d think they’d want to get it right. Since the waitress was unavailable most of the evening I couldn't get her attention in order to request she take it back to the kitchen for a few moments more of cooking.  At least the gnocchi were good.

I have to note that when our food came it was not piping hot. It was more like room temperature, and had obviously been sitting for awhile before being served. That again underscored to me that the restaurant was not adequately prepared for the crowd they had. 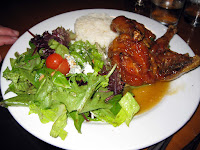 BH had the Game Hen and it was tasty and well-cooked. The sides were nice and he enjoyed them. The last of us had the Fettucine Alfredo and he was likewise happy with his meal, but the lack of service hovered over the experience like the presence of some shadowy dementor.

We soldiered on, finishing the meal by sharing a creme brulee and a triple-chocolate cake. Both were excellent and we managed to get out of there in time to make it to the “Grand Chapiteau” before the show.

The bottom line is the prices are great for what you get. Most everything is pretty well executed, and the flavors are above-average. I can’t get myself to recall the evening as a complete success though. My companions were delightful and the meal was okay (although my own dinner was inedible) but they struggled to serve people properly. As an example, I asked them to bag my lamb. While I couldn’t eat it because it was raw, I could reheat it and it would be perfection. But they never brought it back. Since it was such a hassle to get her attention, I didn’t bother to chase down my leftovers. Those little oversights are the sort of thing one can forgive in a crunch when they happen once, but when they happen repeatedly throughout an evening that’s all you take away.
I must reiterate that the food was good enough, and priced well. Four of us got out for about $150 which seems like a deal these days. The service inconsistencies may have been an aberration. The waitress was polite. She was young and I think she tried her best. But the food was late and no longer hot, she forgot my meal, they left us sitting forever. Should she have been better trained? Maybe. I came away with more questions than answers, and I’m not sure I’d want to go back myself. That said, if you’re on a budget, maybe you should check it out for yourself. Good deals to be had. Bon Appetit!