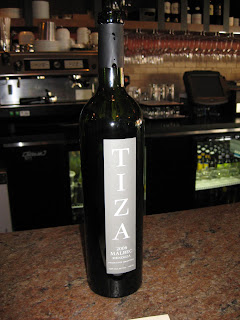 Are you one of those people who just doesn’t feel confident discussing wine?  I know I am.  I never fancied myself much of a wine connoisseur.  It’s overwhelming.  There is so much information to be digested, so many variations in the grapes, the weather, the year any particular wine was produced.  And don’t get me started on the regions, or for that matter, the various countries.  It feels as though if one isn’t a full-time student of wine, one has no business assuming any posture on the beverage.  It's not that I haven't enjoyed a glass of good wine in my time, but frankly, other than the way it tastes, I never really understood the mechanisms with which we are supposed to judge its qualities.  It wasn’t that people didn’t try to convert me.  I had a good friend in the early 80s who would tell me at length about the various wines he had acquired to add to his rather spectacular collection.  He would go on at length about what was special in each of them.  I will say that those wines he chose to share with me were indeed enjoyable, but it seemed to me that he was a little obsessed.  He was talking way over my head.  I just couldn’t relate.

But in the process of tasting his, I learned a little something about what I like in a wine.

Some time later, while passing Superbowl Sundays with another good friend, I received a “class” in this most complicated of beverages at the hands of a yet another self-professed wine connoisseur.  A former colleague of my husband’s who had purchased some acreage in Anderson Valley and had begun to grow his own grapes, this guy had taken things a step further.  He had begun to make his own wines.  As such, he’d managed to accrue quite a few bottles of rather nicely-aged home-made wine.  Opening one was always a bit of an adventure.  In the early stages of learning to bottle it, many of the corks were imperfect, causing some of his product to sour.  So we would either pop the cork on a bottle of a well-aged and lovely red, or we would find the bottles contents were not potable.  The wine we could drink was actually pretty good.  The oldest of his stash had the most unusual quality, a sort of buttery, almost dusty softness in the consummation.  It’s hard to describe when one is accustomed to younger wines, but a lot of the crispness, the acids I suppose, melt away and leave an almost powdery smooth taste on the palate.  I’ve never forgotten how mellow an old red can actually get, though I rarely experience that sensation as old reds generally come with a hefty price tag.   I continue to search for an affordable older wine.

That was decades ago.  Now that friend sells those very grapes to local vintners I often see on my grocery story shelves.  On any given day, one might go into a wine or liquor store and purchase a bottle produced in the Anderson Valley that is made up of this guy’s grapes.  Many of these vintners’s products are considered top of the line.  With prices to match.

But I remain overwhelmed every time I look at a shelf full of wines. The necessary knowledge is vast and tackling the understanding of it seems a complicated and impossible task.  Maybe it’s because I’m not very math-brained.  I absorb things in pictures and flavors, not formulas.  Understanding wine seems to me a little too much like being a good chemist.  So I wasn’t sure I could relate to those who are so passionate about the details of the vintner.  Could relate to people who seem to have a genuine appreciation for the art of making wine.  It looked to me a little like trying to learn how they do all those really tough magic tricks.  Never seemed worth the effort.  That is, until I met Elizabeth Frumusa.

Our meeting was one of those random twists of fate.  I was on the hunt for the next great place to eat in Oakland, someplace I could feature in my blog.  Elizabeth and her husband Chris own a lovely little bistro in the Glenview District of Oakland called Bellanico.  The other is Apierto in San Francisco’s Potrero Hill District.  Glenview is a part of Oaktown I am familiar with, having grown up on Lakeshore.  The restaurant is coincidentally located not far from my day job downtown.  On the occasion of my first meeting with Elizabeth, my pals and I had ventured up to Bellanico rather late in the lunch hour.  Bellanico is a popular destination, so upon arrival we found the place was bustling.  No tables. The BH and I are usually fairly determined table-dwellers, but on this occasion our dining partner suggested we try the merits of dining at the bar.  Close to the action and wine-glasses easily refilled.  Being Irish, it’s his favorite place to be at any given time. So since he was convincing, and bar seats were all that were available, we took it as a sign.  We took three seats open at the far end and began to peruse the menu.

We didn’t know it then, but Elizabeth was behind the bar that day.  So it was Elizabeth who served us our lunch, answering our many questions about the various dishes which are all written up in Italian.  After we gave her our preferences, she suggested some we should try.  We sampled an egg dish called Malfati, a bowl of pasta with spicy tomato sauce and Italian bacon they call “Pepati” and one of the creamiest burratas I have ever tasted.  The food here is truly magnificent, but this article is about the wines, so I won’t belabor the point. 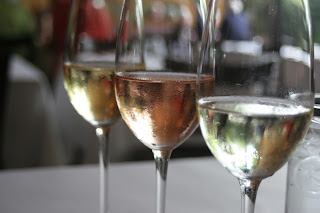 After striking up a conversation (Elizabeth is delightfully forthcoming with information and extremely personable) we learned that she had lived in Italy for some time to study wine and the culture surrounding it.  Before quitting to manage the family’s second restaurant, she was also a wine vendor.  Well, that settled it.  We were definitely having wine with lunch.  The look on Elizabeth’s face as she describes a wine in her flawless Italian would have to be described as a “lit from within.”  Her enthusiasm is more than infectious.  She’s got a gift for describing wines that has a way of captivating the listener.  You just have to taste anything she describes.   She talks of the grapes grown near fruit trees becoming imbued with the flavors of the fruits.  She rattles off names in Italian that sound provocative, mysterious and that carry with them the promise of liquid magic.  The best part?  She delivers.

Elizabeth is Italian-American, as am I, so we really hit it off. But liking her is a bonus.  I remain impressed by her gift for understanding the grape, and for interpreting each guest’s likes and dislikes into a glass of something they will relish.  It is remarkable.  So as always, I say, get there yourself.  Check out her stash, I can guarantee you won’t regret it.