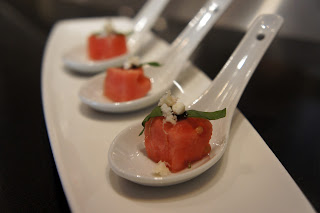 My daughter’s favorite film in all the world is Disney’s Beauty and the Beast, and one of the best moments of that movie is the scene where Belle is treated to dinner by the talking household furnishings.  Lumiere, a charming Candelabra insists that no one be served bread and water when a true repast can be prepared, while arguing with Cogsworth (the clock) who is afraid to treat the young lady to a proper meal should they be caught doing so by their Master, the Beast.  The scene is followed by much singing and dancing (all done by table ware), but the point is a good one.  To be a host is a sacred duty.  It is not sufficient to feed to sustain, it is incumbent on the parties responsible for feeding their guests to provide more.  To provide an experience that will be memorable.

At Guest Chef in Oakland, that concept has been taken to another level.  Every two weeks, a new Chef, or team of chefs, is permitted to run the kitchen for the diners who book their menu.  Each menu is seasonal, and the chefs themselves are vetted for skill and inventiveness.  The concept presented an opportunity for a lovely adventure with which to celebrate the BH’s birthday, so we booked ourselves a table and checked it out.  Not surprisingly, our experience with the restaurant, and the meal served us, was indeed, delightful.

THE TEAM AT FRESH CANVAS

Our meal was served by the team of Chef James Koskiniemi and Sous Chef Paul Dioguardi and it was a refreshing meal of unparalleled summer bounty.

At the young age of six, Chef Koskiniemi won first place in a men’s cooking competition and a culinary award from the famed Alice Waters. It appears that this was all the inspiration young James needed, as he went on to study at the California Culinary Academy in San Francisco.  After graduating at the top of his class, Chef K was the 2010 recipient of the San Francisco Chefs Association Chef of the Year.  Chef Koskiniemi has worked at several of the Bay’s best restaurants, among them Boulevard and Chez Panisse.  Currently Chef James and Chef Paul run Fresh Canvas, a catering company that can be hired to bring one of their magnificent meals to fruition for anyone who’d like to experience their extraordinary brand of culinary acumen.

Whenever the opportunity presents itself, the BH and I have learned to plant ourselves at the Chef’s Counter to watch the magic happen from the front row.  It’s like having tickets to see a great piano player, the closer the better. There’s nothing like that personal interaction with Chef K and Paul were charming, and in addition to finding their fare delightful, I thought they were great entertainers.  Forthcoming with information and passionate about the food they prepare.  In my book, it doesn’t get any better than that.

We loved our first visit so much, we took our daughter back to catch the “show” before closing night.  Having a theatrical background (I spent almost 20 years costuming stage productions) I love the sense of urgency.  The audience only has so long to appreciate that once in a lifetime show.  The actors will never be the same, and each performance is different.  Cooking is indeed, live theater, and the best acts just keep it coming.

On our second visit, we began our meal with a lovely amuse of watermelon and corn “beignets” which were an incredible cross between the light batter of a beignet and the textured crunch of the sweet corn within.  Delectable.  We continued on with several appetizers, an heirloom tomato salad with fresh burrata, and some beautiful bay scallops.

Our youngest daughter and oft-dining companion is deathly allergic to fish rather than seafood, so was unable to taste my better-half’s delectable salmon which had been crusted with macadamia nuts and gently laid on a marvelous bed of farro.  I had a perfectly prepared filet and the Baby Lawyer had this marvelous vegetarian dish which was wrapped up beautifully in a phyllo shell and despite my bias toward dishes with animal proteins, I found absolutely delicious.

The whole experience was somehow heightened by the immediacy of knowing the Chefs were there for such a brief time, and they made full-use of that “one night only” feeling that the Guest Chef model creates.  After spending those two visits bonding, I came away determined to return for another new experience and wishing both Chef Jeff and Chef Paul enormous success.  Were they to open an establishment of their own on a more permanent basis, I’d be first in line on opening night.

It’s a great idea, an incredible experience, and is reasonably priced.  I should also mention that the lovely young woman working both FOH and table service, was great at her job and added immensely to an already perfect experience.

Check it out, make a memory.  Then go back in two weeks and repeat.  No two memories need be the same.  Cool.