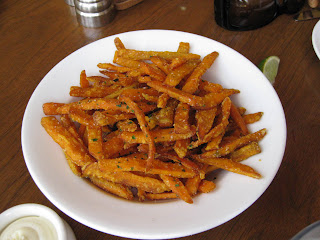 We needed to meet my youngest at school the other day (she's in her third year at Boalt School of Law, so you know she needed a break!) and Henry's was close to campus so we thought we'd give it a try. Neither my BH nor I had been there before, and so it's facelift was lost on us, but what the heck, the menu looked interesting.

Since Henry's is an actual bar, we ordered drinks. I have become a huge fan of mixology, and am most always game to try a new concoction. So I ordered the Hot Flash which was a blend of Heiradura Reposado with muddled cilantro, mint and lime juice. The rim of the glass was covered with a jalapeno sugar that made for a serious kick when mixed with the drink, which was itself a twist on a mojito, but much much better. My BH had the Gossip Girl (I know I know) a pleasant blending of Bacardi light & dark with coconut, cranberry, orange juice & pineapple. It was pretty good, but in my opinion not as incredibly unique as mine.

The waiter was really busy, seemed to be the only staff there for lunch. I was a tad annoyed that he failed to let me know in advance they were out of the quesadillas. I had my heart set on the Buttermilk Fried Chicken Quesadillas, and would have preferred not to get in that mindset only to be disappointed. That said, I soon settled on what seemed an even better choice, a dish called the Angry Mac & Cheese which was a macaroni and cheese, with sambal olek (which if you were completely in the dark as I was, is an Indonesian chile sauce) tomato, and scallions. When it came, the macaroni was covered in a spicy, creamy, tomato sauce that had a really well blen 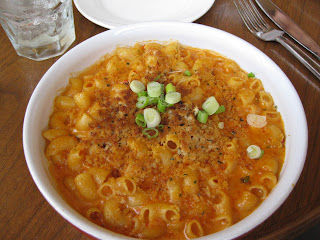 ded flavoring. It was hot, and even after the jalapeno drink, I loved this dish. I love my spices and this hit that hot-wanting-spot!

We also ordered their sweet potato fries, which I found really well seasoned. I've tried this new "fry" varietal at several different restaurants and this one was the best I've had by far. Moist on the inside and crispy on the outside, they were a real treat.

My BH had the Seafood Corn Soup and a Burger, both were satisfactory, but nothing special. He's had better burgers elsewhere, but the patty was cooked properly and it wasn't drowned in bun. Our daughter had the Orriechiete Pasta which she enjoyed. I'd say the food is mostly good, but it is still a sports bar. I would definitely choose to eat here again, but I wouldn't go out of my way for the food. The drinks, however, were another story indeed....

Dining time: probably could get out in an hour, service was overwhelmed when I was there last.