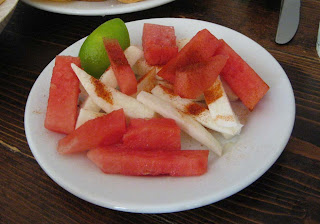 I've had several people tell me I just had to eat at Dona Tomas. I resisted. I like Mexican well enough, but it's rich and I'm trying to watch what I eat. But, finally an occasion presented itself and the stars aligned. My sister was meeting my husband and I for dinner in Oakland, and so I made reservations.

We arrived a bit early and it wasn't really what I expected. It is open and light and fairly traditional looking inside. The restaurant is situated on 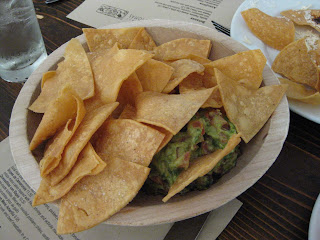 Telegraph in Oakland in a neighborhood that still retains much of it's mid-century character. Meaning it's kinda shabby chic, but populated and safe enough.

We sat down and as we waited for our fourth, my daughter to join us, we ordered Margaritas. I had something called the "especial" which I noticed only after I ordered it is a $22 Margarita. Wow. I almost cancelled the order, but since I began writing this blog, I try to be open to new experiences, and it's not like I haven't had pricy drinks. Well, almost never that pricy, but what the heck, or so I told myself. It arrived and once I took a sip, I pretty much got it. It tasted like a glass of light orange air bubbles, laced with some sweet tequila. I had two drinks, but I confess I did have just the simpler house Margarita for my second. Unless it's solid gold, $22 is really a lot of money for a single cocktail. But it was a treat just the once. The second drink was pretty tasty too, so I must say I was content as I munched on my guacamole and chips.

We opened with some fairly standard mexican fare, beginning with guacamole and chips. The chips were good, and the guac was outstanding. I didn't think any place could compete with Tamarindo, but this was just as good, and completely different. More chunky, more pieces of ripened tomato, whatever they put in it, it's great guacamole. We also had some watermelon sticks (which were supposed to be accompanied by pineapple, but they were out) and jicama. Loved the watermelon, not fond of jicama. Would have preferred this dish with the pineapple. I should mention that they bring a complimentary bowl of chips when one is seated, and they have a nice tangy dipping sauce unlike anything I've had in the past. 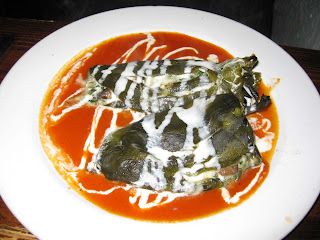 By this time I'm feeling no pain and decided to order my own favorite Mexican dish, Chile Relleno. My BH had a Chicken Enchilada, and I believe my daughter the Tostada. Mexican is incredibly filling, so I didn't taste either, but they were both happy with their dishes. The BH especially, raved about his dinner.

My Chile Relleno were out of this world. I've never had anything quite like it. All the food in this place is served in large, fairly traditional sized servings, and plated simply. But it is absolutely delicious nonetheless. Really fresh and unusually complex flavors jump out at you from whatever you are served, all of which is delicious from cocktails to dessert. 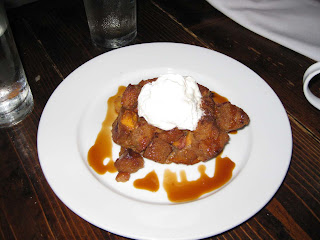 This is definitely an amazing restaurant. Everything is prepared with a very new point of view, for lack of a better way to describe it. The dishes are familiar and the flavors are pleasing, but even the refried beans are spectacularly unique. It's sister establishment, Flora to be reported on later, was one of the reasons we tried it and we were not disappointed. I will get back there as soon as my waistline and pocket book will permit. I suggest you do the same.

So do check it out, and Bon Appetit!

Dining Time: Only serves dinner, so not really an issue