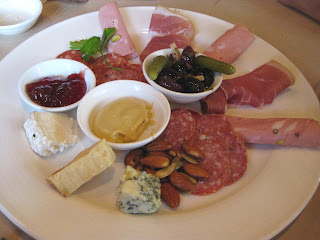 Sorry not to have written for so long. It's not that I haven't been eating, I promise. In fact, I've been eating a lot, just haven't had as much time to tell you all about it. To make up for this lapse, I am writing tonight about a really swell place I tried several weeks ago.

It's not in Oakland, so it's a special treat, but it is in the Bay Area. Palo Alto, to be exact. The home town of my BH and a lovely place to dine. It was a special occasion of sorts, getting together with a pair of good friends, so we wanted to eat someplace really nice.

The restaurant has two locations, one larger site they just moved to located on Homer Avenue, and the previous location now called "The Annex" where they serve brunches. The brunches here are supposed to be amazing, but we haven't tried one yet, so I won't be filling you in on that as of yet.

We may not have had the brunch, but we did indeed have dinner at St. Michael's just a bit over a month ago. I found their standards to be delightful. They begin by serving this amazing warm herbed bread that I had trouble not spoiling my appetite with. Those kind of carbs are my idea of heaven. We also had a nice meat platter. The selections were nice, but I found the portions a bit skimpy for sharing. I like to be able to try a bit of everything without monopolizing the experience. It's only sliced meat people, so either put a few repeat varieties on the plate, or slice a few more of each for the patrons. We can't all try something if everyone's feeling tortured about taking the lone piece of mortadella. Other than that it was all pretty good.

They've got a bar, but in mentioning it, I would provide a caveat -- while they do have a great list of specialty cocktails, that is pretty much all they have. One type of vodka, one type of tequila. Whatever it is they use in their listed drinks. So this isn't the place to order your favorite specialty liquor, or other unusual spirits. They have not invested in fully stocking their bar, so it's likely that if what you crave isn't on the specialty menu, they don't have it. That said, I thoroughly enjoyed my drink, which was a Passion Fruit Margarita. My BH had something called an Aviatrix. Mine was a sweet fresh-fruity Tequila goodness concoction, his was an unusually savory and really strong man drink. Which is odd considering the names, but I didn't name them. 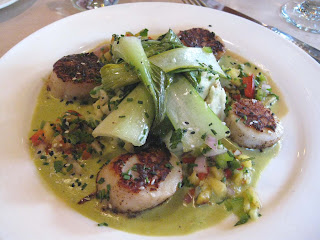 I began by ordering the Thai Carrot Soup. It was a nice mix of the complex flavors of both a classic Thai soup and a hint of carrot, although it must have been mostly fresh carrots. My BH doesn't even like carrots and he liked this soup. Really tasty. Next I had their Seared Wild Sea Scallop, with a Wasabi Beurre Blanc and Pineapple Salsa. They definitely know how to prepare a scallop here. That lovely barely crusted golden brown top with the moist flaky center. Scallops have become one of my favorite things to eat, but only when they're done right. These were done right. The sauces were really unique and continued the slightly Asian fusion theme of the evening's menu. Just enough to enhance the flavors without obliterating the perfectly prepared scallop. A great dish.

BH had the lamb special and he loved it. Lamb was done properly, herbs all complimented the meat without hiding the flavor. 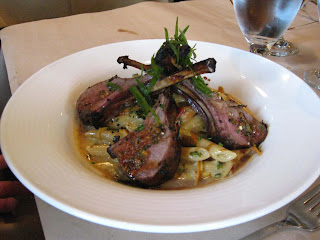 We finished our meal with shared desserts, we ordered the Dark Chocolate Mousse Torte, the Profiteroles with Chocolate Chip Gelato, and we rounded out the dessert "buffet" with a Cassis Sorbet. The torte was thick chocolaty goodness, very tasty, moist in the middle. All the right consistencies and flavors for chocolate lovers. I love chocolate, but I can take it or leave it, my BH would insist on being be buried in a chocolate coffin.

The profiteroles were light and fluffy and filled with an excellent house-made gelato. I thought they were as good as profiteroles can be. My own favorite (maybe because by then I was stuffed) was the Cassis Sorbet. It was beautifully fresh black currants frozen and blended to perfection. Light, just sweet enough, but not so sweet as to overwhelm the tangy-ness of the currants. I just loved this stuff.

Our friends ordered some other items on the menu, including the Caprese Salad (which I tasted --- the tomatoes were heaven) and some rockin' house made raviolis. My bro-in-law was the only one among us who was unhappy with his meal. He thought his chicken was under done.

All in I thought the meal was outstanding. I found this place to be a definite repeater and will put it in rotation. There are simply too many great places to eat these days. What a problem to have! The service was attentive and extremely professional without being annoying. Our server had a real sense of personal pride in everything that was served, wanting our experience to be first rate. If that's not your thing, you might not appreciate it, but I really did. 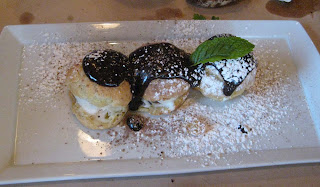 Now I just have to find the time to get there again.

Dining time: dinner was leisurely, not sure of luncheon