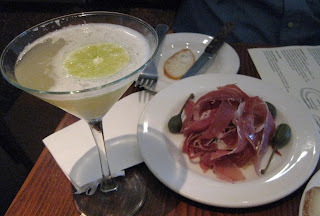 Anyone familiar with Alice Waters' original undertaking, Chez Panisse, knows that the restaurant she began and those restaurants that followed in her path inspired by her desire to feed people in a new and spectacular way --- all conjure up high expectations. For well-prepared and plated food, for a unique and impressive ambiance, and more generally, for excellence. In 2006, Chez Panisse's neighbor, a tapas establishment started by some former employees of Chez Panisse and aptly named Cesar (now distinguished from the Piedmont establishment as "Cesar Shattuck"), opened a second storefront, branching out to a Piedmont Avenue locale. My little band of food vagabonds was among the first to try it out back then. We were amazed, both with the quality of the food, and of course, the prices. But when something is world class, once expects to spend dearly for it, or so I'm told. If you're going to charge a lot, you better be prepared to bring it, day in and day out.

Recently we had occasion to revisit the restaurant on the birthday of our PFC (Partner in Food Crimes, for those of you who don't read regularly). He could pick anywhere and this was where he asked to be taken. Birthday rules. We got there right at noon, not sure how crowded it might be, and they don't take reservations. As an aside, about a year after opening, Cesar Piedmont threw us a curveball. They changed up their menu to serve breakfast, but only until noon. This meant that arriving early to secure a table in lieu of a reservation was complicated by not being able to order (unless one wanted breakfast) until after noon, leaving this weird gap while they changed out the kitchen. It was a confusing alteration to what had previously been a pleasant experience.

But on this particular day, it was not a problem. We got there a bit early and were both allowed to be seated, and to begin ordering from the lunch menu. It seemed that they had re 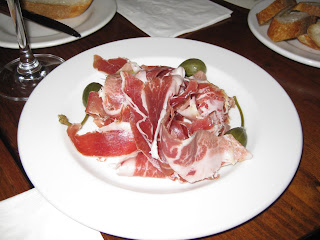 laxed their restrictions from our previous encounter. We began by ordering drinks. The BH and my daughter had the Apricot 76, which was a mixture of (Bombay Gin, Apricot Liquer & Champagne). Rather than being overly sweet, it was a strong drink, but with an airiness to it that I found really appealling (I get to taste everything, since I write the blog -- it's really just my evil plan to eat from the plates of others without fearing rebuke). I myself ordered something called a Tequila Love (a combination of a Herradura Silver Tequila, Moscato & Pressed Pineapple Syrup). This drink was also outstanding. I am a huge fan of the new "mixology" and have gotten so spoi 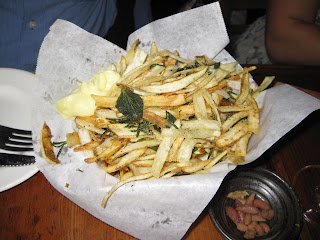 led that ordering a "gin and tonic" seems like punishment, am no longer able to request such a boring cocktail, at least not without running the risk of boring myself to death.

We followed the cocktails rapidly (so much so as to be concurrent) with apps. We began with two meat platters, their Jamon Iberico and their Serrano. The cuts were great and the portions generous enough. We ordered also their Spanish Cheeses, which today were an Urgelia (cow), a Murcia al Vino (goat) and a Tronchon (blending of sheep, goat and cow). I love cheese. These were good, but I was annoyed at the waiter because he sent a busboy over to just drop the platter and disappear. No one introduced which cheese was which. Frankly, the wait staff was a bit disappointing overall on this visit. We were attended well enough, and we didn't lack for food for any length of time, so it was not a major flaw, but when one is paying through the nose, there is a certain 'presentation' that is expected. That is reasonable. We did not receive that level of attention. Someone should have tended to the cheese, guys.

Along with these various meats and cheeses, we ordered their French Fries. Theirs is variety on this 'dish' that may be among the best interpretation of a fried potato anywhere on the planet. If you are a french fry connoisseur, then you have to try these. They are thin, flat slices of crisply fried potato, perfectly infused with just the right levels of garlic and salt. They are more addictive than a potato chip and twice as good.

Next we had several dishes to share. The first we'll discuss was the Paella Cangrejo y Gambas (consisting, according to the menu, of fresh blue crabmeat & large gulf shrimp in a lobster broth with peas & piquillos). Generally I love a paella. Spicy, crunchy on the bottom, flavorful, right? Not on this occasion. It was a wet and sloppy hot mess. Really not up to their standard. It tasted like boiled white rice with a little canned tomato. The prawns were lovely and well cooked, but nothing else about this dish was memorable. It was a huge disappointment. 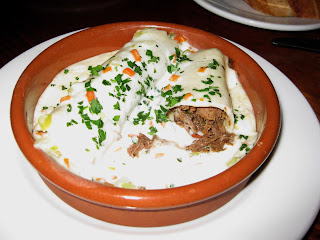 Next we'll talk about the Canelones de Catalunya (Canelones stuffed with braised beef, bacon and vegetables). In my mind, this dish was as good as the other was watery and unmemorable. It was layered with a delicious creamy sauce, the beef tender and seasoned to perfection. Absolute perfection.

When the Canelones arrived, they also brought us our Roasted Heirloom Tomato (stuffed wtih chanterelle mushrooms & rice). It was, I'm sorry to say, stuffed with the same soggy mess that apparently came in the paella. I really don't know what was going on in the kitchen that day, but I sincerely hope it was an anomaly, and not typical for their new chef. They used to have the best paella anywhere, and this wasn't remotely close to the quality one should expect at an establishment that considers itself this high end. 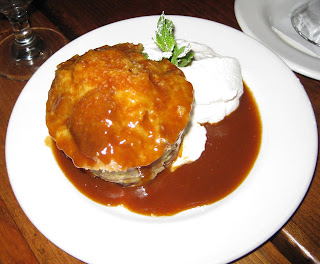 Then we had the Pollo Asado a la Costa Brava with Grilled Scallions (grilled chicken with garlic & herbs). The grilled chicken was as perfect as the paella was lacking. It is one of their specialties, and the reputation is well-deserved. The meat is moist, and all the flavoring is cooked deep into the meat. Garlic, herbs, the smoke of the grill, all of these things pervade every moist, perfectly-cooked mouthful.

Since this was a birthday celebration, we also ordered dessert. Two. The Bread Pudding with Orange Caramel Sauce (pic: above) and the Cesar Sundae (pic: below). The former was a magnificent concoction of milk, bready goodness and a die-and-go-to-heaven-good caramel sauce. The latter was a bowl of chocolate-y gelato and steaming hot-out-of-the-oven-fresh churros made on the spot. Both were excellent. 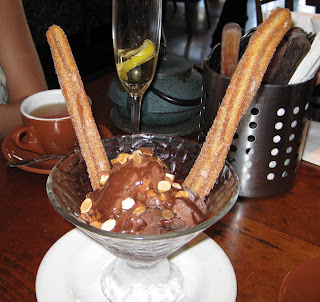 Seriously, if you order nothing else, come on in here and have yourself a Cesar Sundae. There are just some things worth an extra workout (or two).

Cost: Arm and a leg, maybe both legs.