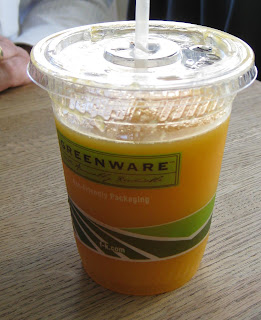 In my ever-widening search for new places to write about, I am trying to broaden my experiences when it comes to restaurant offerings. That should, it seemed to me, include diners and other niche establishments that don't necessarily have a full bar and plush fancy seating. Great food often comes with a great big price tag that can be hard on a family budget in this down down down economy.

People don't always need to eat high end, but food should always be fresh and healthy. I haven't had a McDonald's burger in over a year, maybe even two. My BH and I are of an age where junk food is just an all around bad idea. With the kid's grown we have time to choose our food with a little more thought to its ultimate effect on our health. If I am honest, I have to say I don't miss the Big Macs and Happy Meals, but I do miss the low prices. 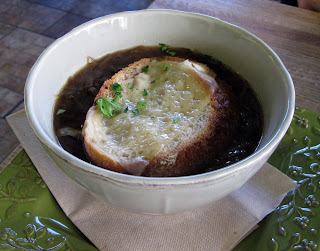 So while scouring the web for a new place to take our fussy and increasingly health-conscious youngest daughter, our Partner in Food Crimes found Cafe 15, a tiny hole-in-the-wall situated between Clay Street and Jefferson, which touts itself as serving food with an emphasis on being local, organic and fresh. The on-line reviews were pretty favorable and the pictures of the food was appetizing as well. So we checked it out. My daughter ended up not being able to join us, but we headed there for lunch in the middle of last week to check it out anyway. The weather was nice, and since the place is tiny, with most of its seating outside, we figured a sunny day was the best time to risk it, just in case the crowd forced us outside into the open air.

The menu is overwhelming. Quite literally. It's huge, the whole front of the ceiling over the counter is covered with choices of delicious sandwiches, soups and salads, all of which were appealing. In addition, they had a pretty extensive list of daily specials. Burgers, Cold Sandwiches, and Salads of all sorts. It was a cacophony of food combinations. Even goat cheese abounded. Yum!

We really lucked out when the party in front of us decided to move outside, allowing us to nabbed one of the few tables indoors. We struggled with the menu for a moment, in that good way when one is presented with just too many options and the decider in your brain just won't quite settle on one thing. We finally settled on what we would choose and put in our order. While we were struggling with the menu, we had let a party go ahead of us, and I have to say the cashier/hostess really handled the situation politely and with patience. We appreciated the gesture. It was nice to be assisted by such a pleasant young woman. It's hard to always be in a hurry.

My better half and our PFC both h 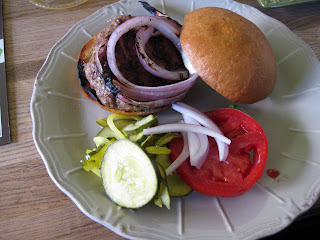 ad the Lamb Burger, and an Orange Juice. My BH also treated himself to a steaming bowl of their French Onion Soup. I ordered off the specials menu, requesting an Organic Pomegranate Salad (a blend of mixed greens, goat cheese, pears and pomegranate). The waiter brought us our meals pretty rapidly. Waiting was not a problem, it came in under five minutes. Seemed immediate.

The OJ was fresh-squeezed (although prepared and packaged before our arrival) and amazing. When an orange is perfect, its juice is too, so clearly they were using high quality fruit. Good sign. The lamb burgers were moist, having been grilled on an open flame to sear in the juices. Both my BH and our PFC commented on the meat's being done exactly as-ordered. They had both requested medium rare, and the burgers arrived perfectly tinged with pink in the middle, rather than gray all the way through as so often happens with incorrectly cooked meat.

On another note, the bread they serve here is exclusively Acme bread. Acme is one of my favorite bread vendors ever. The company is an off-shoot of the Chez Panisse legacy (Acme was the brainchild of one of their dishwashers) and is now considered to be world class. If you love good bread, you'll love Acme. The French Onion Soup was good, ingredients tasty. The BH enjoyed it, but had no specific flavor notes to add. Oddly enough, while he loves French Onion Soup, he is not a fan of onions, so ....

I think my Organic Pomegranate Salad was one of the best salads I have ever had. A big problem with many salads can be in the dressing. The greens are all too often under- or over-dressed. There does seem to be a skill for hand mixing salad that is keeping this from being a problem in current dining experiences, but I have never seen a trick such as the one employed by Cafe 15. The salad was presented almost like a calzone, with the lettuce wrapped gently around and over a beautifully-dressed thick slice of brown bread, layered with warm goat cheese and pears in the center, and dressed with a light fruity vinaigrette. Eating this salad was like working to the chocolate in the center of a tootsie-roll pop. Delicious! It took m 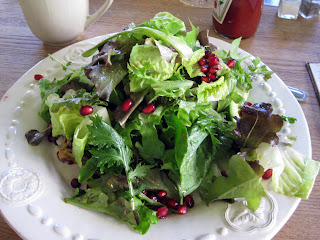 e awhile to discover that all the goodness was coming from beneath the lettuce, but the experience had this nice reverse-effect from eating most salads. Usually one eats all the goodies from the top of a salad leaving the naked lettuce to pick at for the balance of the meal. That presentation can cause me, at least, not to finish much of my lettuce. But Cafe 15's version has the lettuce come first, and each bite taken catches a bit of the goodies underneath, causing the meal to build to a crescendo, rather than bringing the diner to a disappointing finish. I ate every bite. It was really a masterpiece of a dish. And incredibly inexpensive. Brava.

This tiny little hold-in-the-wall is a must-try. The food is great, and extremely inexpensive for food of this quality. Our meals were about $10 for lunch per person. Their motto is "Fast Food Redefined" and I believe they live up to it. The servers and staff were all very polite and professional, and put up with our temporary ordering chaos with aplomb. It is really small, and tables are at a premium. I recommend you either come early, or get your food to go!

Dining time: in and out under an hour, no problem!