NINNA - Checking up on an old favorite 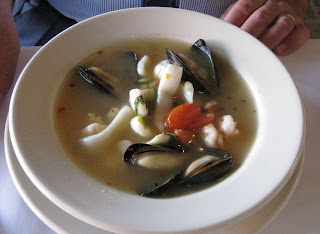 Years ago the BH and I used to walk with a co-worker to a place we liked on Piedmont avenue. The co-worker was ahead of the foodie curve, and she was always finding the latest yummy place to eat somewhere, as well as encouraging my BH to take long healthy walks. Needless to say, when she moved to Indianapolis, I was bummed big time to lose a valued eating buddy.

Their trademark is that they prepare food with a primarily mediterranean style, and fuse their dishes with hint of various traditional Thai spices.

The other day I had a doctor's appointment nearby, so the hubby and I walked over to Ninna to see if it was still as good as we remembered. We have always enjoyed the food there, so we were looking forward to a treat.

When we arrived at the early portion of the lunch hour it appeared just as we remembered. The pleasant woman who greeted us must be Ninna. We have always assumed she was the owner. She has the intimate presence of a person who is more than an employee and seems to care if you have a pleasant experient. She was very attentive, but we were the only patrons in the restaurant for most of our stay. One other patron arrived eventually, though it remained just the two tables for the better part of the meal.

She seated us quickly and brought us each a menu. I'm not sure if it was my memory, or if my food tastes have just outgrown this place, but the menu seemed to be lacking many of the previous dishes I had enjoyed. Most of the choices seemed uninspired and bare-bones. We were hungry so we tried to go with it.

The BH had the Fisherman's soup, a variation on a sort of bouilliabase, consisting of mussel's calamari and shrimp. He asked that they prepare it mild, and they said they could comply, though when it came it was visibly laden with red pepper flakes. He ate around them. I ordered the Grilled Chicken Breast with peanut sauce and spring mixed salad. My husband enjoyed his soup, but he didn't seem overly impressed. I found my chicken breast a bit dry and the sauce was ordinary. The salad was also a bit underdressed and notably unremarkable in its flavors. Remembering the delicacies of flavors enjoyed here in the past made it all the more unimpressive. 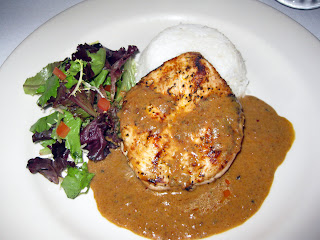 It seemed a bit of a shame, as this had been a place we had kept on the top of our favorite places to eat list for such a long time. I don't know if the restaurant has failed to keep up with current food trends, remaining true to is former self and being left in the dust by the natural passage of time, or the quality has actually slipped a bit. Either way, it was a disappointment. Nothing was terrible, it was an adequate meal, and the prices were reasonable, so no harm done.

Sometimes a walk down memory lane brings back experiences or tastes we can treasure. Sometimes it is just a walk. But a walk isn't necessarily a bad thing. Maybe it's just me. If you want to prove me wrong, check it out. This is a tough industry and maybe they were just having an off day.