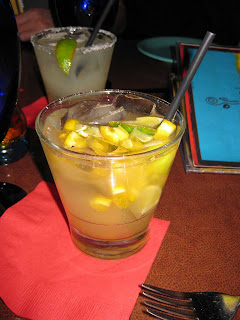 Cascal is an amazingly colorful place. My BH and I stumbled (quite literally) upon it a little over a year and a half ago, when cruising his old neighborhood haunts for a place to grab a bite before heading to see a show at Theaterworks. We saw the place was close to the theater and so we went for it, without a clue what we were in for. But we're adventurous that way.

The first thing one is served is usually bread. At Cascal that offering is a foccacia-style carb with a really nice herb-blended olive oil. That first time we ordered the watermelon salad, and it was really really sweet melon, drizzled with a perfectly seasoned dressing and accompanied with goat cheese. It was one of the best salads I have ever ordered. We ordered it again on this last occasion, and the unfortunately the melon was not quite as seasonal, or not quite as perfectly ripe, and so the salad itself was not quite as mind-bogglingly good. But it was still a dish worth ordering. The blending of cheese, melon and savory dressing will remain among my favorites, though I imagine it is best at the height of the summer melon season.

When my BH and I returned about a week or so ago, we brought along our favorite couple to hang with. We were all out to spend some quality time together before a planned minor s 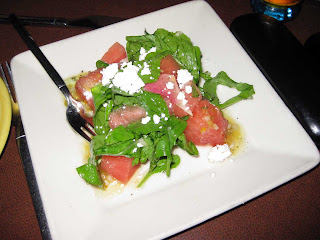 urgery I had scheduled for the following week that was going to make going out difficult for the near future. My BH and I hoped to introduce them to some of our favorite dishes while experiencing some new ones as well. We began with drinks. My Better Half and I really enjoy their Caipirinhas, a sort of muddled fruit mai-tai-ish concoction that is thicker with fruit, heavier with liquor and fresher in taste than what comes to mind when one thinks mai tai. They are strong drinks, and the taste is only as sweet as the fruit within, rather than containing any additional sugar. Or at least that's the way they taste to me. I like 'em.

One of our party ordered the Cuban Black Bean Soup with Sherry. I had skipped the soup in favor of a second Caipirinha and some Watermelon Salad (with goat cheese, watermelon radishes and a citrus mint vinagrette). By now, I was definitely feeling no pain. I tasted the soup and it was really good. Not as 'beany' or thick as bean soup usually is, and more complex with flavor. My BH an 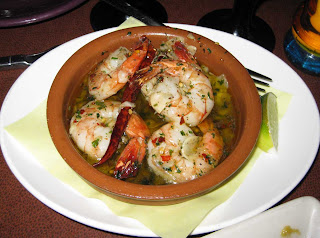 d I shared a dish called Sizzling Shrimp which consisted of shrimp sauteed like escargot in a small skillet of garlic and butter. They were moist, garlicky (the other flavors were subtle, and while they complimented the garlic well, I would definitely say garlic overpowers this dish) and delicious. But I love my garlic. We also shared an order of Serrano Ham. The Serrano comes drizzled with olive oil over several slices of sourdough bread. What can I say? We are a huge fan of appis and tapas small plates.

So as we enjoyed our appetizers, and our drinks dwindled, we each began to realize a lot of time had passed. Where was our dinner? We were a little drunk, and it had been almost a half an hour since the last dish had been served. Our waitress walked by, looked at our table in horror and walked off without speaking to us. When we were finally able to get her to stop, she apologized and said that the kitchen was slammed. This was obviously a lie, and really ticked us off. I am the first person to forgive an overworked server who forgot to put in an order, but when he or she just makes stuff up, it really kinda ruins their cred. There had been empty tables all around us when we arrived, as we usually dine on the very early side of the dinner crowd. So we could not have been among more than maybe four or five other tables in a very large restaurant when we had placed our original order. She said she would check with the kitchen and didn't return 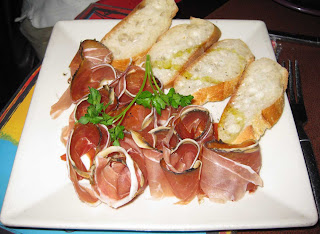 for another fifteen minutes or so, at that point saying that she was sorry for the delay, and scurrying off. She didn't ask if we wanted anything, say like another drink, to pass the additional time. Basically, she handled it badly.

Eventually our meals came, (with yet an additional delay on the paella ordered by the other couple, which is a dififcult and lengthy dish to prepare, and which she had obviously placed with the kitchen really late in the game). In spite of the delay, we tried to enjoy the rest of our meals. My BH had the Lamb Chops, which are grilled and come served with a side dish of fried potatoes with chimi churri.

Given the long, long, long break between the apps and dinner, my notes fail me here, because I had a third Caipirinha. I know, right? Wow. So at some point the waitress (who had to know we knew she was lying about our orders, for a variety of reasons) said she had spoken to the manager and arranged for our desserts to be on the house. Way to save her tip! Seriously, it was appropriate, given the almost one-hour lapse between appetizers and main course. Not sure if she told the manager it was her bad or the kitchen' 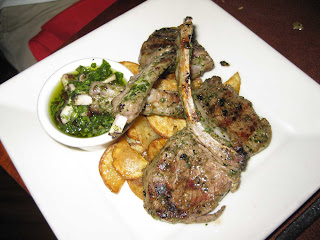 s but we were just happy she made it right.

We ordered the Tres Leche Cake (coconut infused "three milk" cake with fresh fruit salsa and meringue topping), a Warm Chocolate Souffle and I believe Fried Plantains with house made Ice Cream. The Tres Leche Cake was out of this world. It's one of my favorite desserts, something about the creamy, stiff-pudding texture and the sweet, subtlety of coconut -- it just gets me every time. The chocolate souffle was a good, solid pretty standard souffle, leaning in consistency towards the molten chocolat cake variety, meaning that it was cakey on the outside and liquid in the middle. The plantains were just okay. They weren't light enough to carry off the deep-fry and the batter itself was unremarkable. But the ice cream served on the side was delicious.

The meal ended up taking over three hours, but generally service is promp 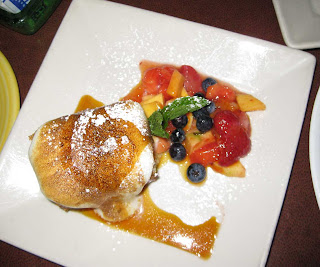 t and one could get out in time for a show if one had to. I know. I did it. In spite of the service failure, they did the right thing in the end, so I would not hold this one lapse against a restaurant that has always proven to be first rate in the past. Go check it out. And definitely do it when you can stay for a drink (or three)!

Dining time: ?? depends on your server! (seriously, every other time we were here, we could easily have gotten out in an hour if we'd wanted to)