BOCANOVA - Pan American on the Square 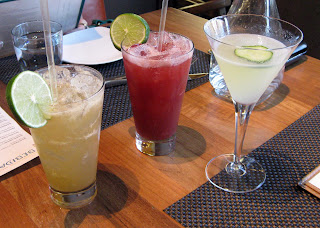 "Is that where the Old Spaghtetti Factory used to be?" the answer is yes. After the new Bocanova was recommended to us by friends who had recently dined there, we decided fairly promptly to check it out. We were told by some it was the Old Spaghetti Factory. Others said well, no, it's not. Different building. I can definitely say it takes up at least a large portion of the building that formerly housed the Old Spaghetti Factory at Oakland's Jack London Square.

Our little traveling lunch party of three dropped by last Tuesday. We try to bring a third for any place whose specialty is small plates, it helps with the ordering.

When we first entered, I was impressed by the beauty of the place. It is a thoughtfully furnished room, well appointed and welcoming. Kudos to the interior decorator.

We began with cocktails. Once a week or so we indulge ourselves at lunch, provided we have no thoughtful writing to do after the noon hour. It's the only way to accurately gauge a bartender's skill --- to actually have a drink. Not a big challenge, as we all have trouble passing on a well "mixologied" cocktail these days. I ordered a 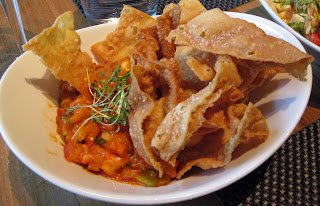 Red Passion Margarita which I found to be a welcoming blend of fresh & clean flavors, all swimming my my tequila. Fresh ingredients rarely carry the overly sweet or cloying attributes of say a traditional drink mix. The old-school mai-tais or rum punches made with a mix were just too too too. This drink was not. It was tasty and delish. My companions had a 1944 Mai Tai (a spicy crisp drink with a slight herbal aftertaste. I thought it was as good as mine) and a Cucumber Gimlet which was a simple concoction of vodka and cucumber with just a hint of citrus. Not as interesting to me as the others, more of a refreshing summer drink, but good nonetheless.

We followed our drink order with both ceviches on the menu, the Wild Shrimp Ceviche and the Halibut Ceviche. We all agree that the ceviche at Tamarindo is our favorite, but we are always searching for another variety that will make us feel it. That will challenge familiar perfection with a new brand of perfection -- a different spin on the dish -- giving us that special something. Bocanova's shrimp ceviche is a spicy one. It is made with jicama, red pepper and cilantro, and comes with f 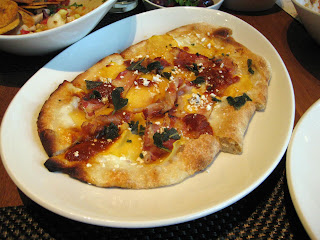 ried won tons to dip it out. We all thought it was okay, but not a challenge to our favorite and certainly not impressive. We also sampled the halibut, which was not quite as good as the shrimp. This dish is seasoned with tomato, zucchini, cilantro and aji amarillo (a blend of fairly spicy Peruvian chiles). We found the halibut ceviche to be a little fishy-tasting. We were not sure if it was the ceviche's preparation or the fact that we ordered two different kinds together. It may just be that they don't compliment each other. Either way, they were just okay. Not bad, but not amazing.

Next up on the menu was the Prather Ranch Mini Burgers with Guasaca Sauce. We all agreed that these were perfection. Really really good. Rarely is meat done that perfectly in a burger. This was moist and tasty and the sauce (which is a mix of an avocado guacamole base and horseradish, I believe) was perfect. It didn't get in the way of the meat flavor, but complimented. Lighter than straight guacamole. They brought our Turkey Gumbo and it was not hot enough. It was good, but in my mind not as successful, being a bit oily for our taste, although with a nice rich flavor of sausage and turkey. 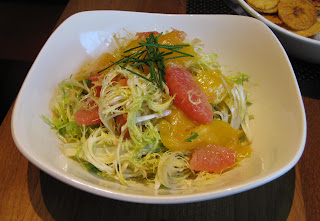 The salad I chose was a blend of Frisee, Grapefruit and Radish with a Mango Vinaigrette. The salad was light and tasty. I really enjoy a well dressed salad, and while this one had a lovely texture and good flavor, it was overdressed and there was no radish that I could distinguish.

We also ordered the "Huarache" which is a flatbread preparation of bufala mozzarella, peppers and an aji panca tomato sauce. I thought it was delicious. I think it also contained slices of meat, though none was listed on the menu. It was thin-crusted hot melty goodness. It was one of my favorite things they made here. The Peruvian olives were also delicious. We finished off the meal with the Chocolate Croissant Bread Pudding. This dish was a lovely flaky buttery croissant melded with pudding-y goodness and topped off with a large serving of chocolate ice cream. Excellent and unusual. Everything anyone might want in a dessert.

Overall we really enjoyed our meal. It was not perfect but there were some really outstanding efforts in the mix. I would say that this is an establishment still finding its identity, with 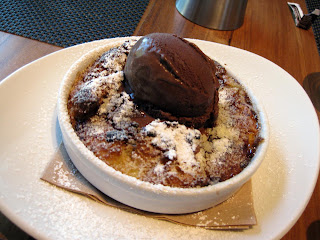 enormous potential. Among the best features, the mixology (superb) the huarache (or other flatbreads), the mini burgers and desserts. The other items needed work, but not so much as to say stay away. Another diner might find them just to his or her liking.

Head to the wharf and check it out!

Dining time: Tapas takes a bit, but if you told them to bring it all at once, you might be able to get out in an hour.

Noise: not a problem when we were there

PS: The restrooms while lovely, are not laid out well. I'm told the soap dispenser is really really low. I found the women's rooms lack of towels really annoying, especially after getting some of the red tomatoey sauce on my best dress (ceviche). I don't think a nice restaurant should ever expect its' patrons to make do with nothing but an air dryer. That's just too low rent for me.