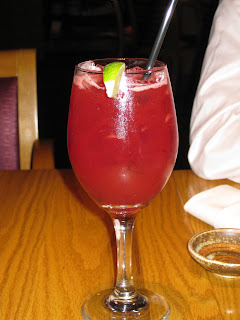 If a restaurant can be the polar opposite of the homey and familiar diner, this would be it. Ozumo is a smooth, polished, fairly chic open space. The layout of the restaurant (which is bigger than huge) wraps around a fairly large open bar just left of center. The entire space is decorated in traditional Japanese modern decor--- loads of black, slick surfaces and paper walls. The place is beautiful, but I find it a bit cold. It's beauty is not a welcoming form of beauty. That said, I'm told the place is hopping at night, and I think that what may seem at lunchtime to lack warmth and appear too empty and holllow, is actually just the empty spaces crying out for people to fill them. If it was full of people, which I believe it is once happy hour kicks in, this place would be loads of fun. This is a place that was clearly designed for large crowds, and so feels a bit off when it isn't full of people. 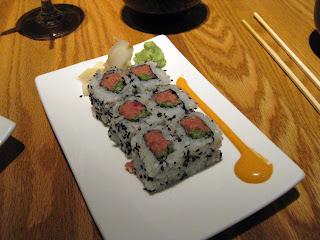 That said, though, it's a really nice place. It's on the newish side, and thus still sort of finding a stride. Service is attentive enough, and the food is good. They serve pretty standard sushi and sashimi fare, with a few things like simple burgers thrown in.

When we ordered last week, I had two rolls. One was a Spicy Tuna Roll and the other a Rainbow Roll. Both were presented well, the fish was fresh and the seasoning was tasty. Nothing to complain about, but nothing to jump up and down about either. The BH had a Sashimi San Bento Box which consisted of a variety of sashimi, some edamame, miso and rice, all of which he found quite tasty. Our lunch companion ordered the Bento Box as well, his containing a broiled salmon filet. Along with our meals the BH and I ordered their non-alcoholic 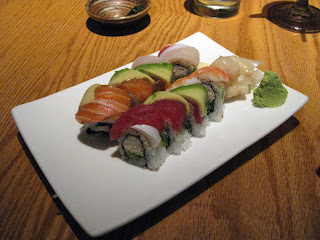 drink special for the day which was a Blackberry Lemonade Spritzer.

I have been here now several times and the food is consistent. The alcoholic drinks are well mixed and really excellent. I would bet that this place is a great time come an evening. They've got a d.j. station at the bar and a happy hour space that would accommodate quite a good crowd. It's a decent place for lunch, but nothing to travel all the way to Japan for. One of the flashy little touches that shows a real sense of humor can be found in the restrooms. They have Japanese lessons blaring on a closed-circuit speaker that pipes into the stalls.
WARNING: Japanes 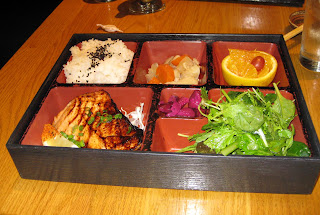 e lessons in the ladies room should come with a disclaimer. I think I learned how to call for a taxi, but with the echo in there, I may have learned something more akin to "Your mother-in-law sleeps with the pigs..."

Check it out for yourself. If you like Japanese you won't be disappointed. If you're local, make it dinner. Bon Appetit!
OZUMO (Oakland)
2251 Broadway
Oakland, CA 94612
510-287-8476
http://www.ozumo.com/
Dining table size: Adequate
Noise: Probably pretty loud at night, daytime no problem
Dining time: should be in and out over lunch hour no problem
Cost: Pricy.
Posted by The Food Apprecianado