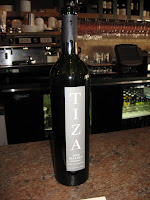 In search of a new food adventure, I found myself perusing the web a few days ago for any mention of new eateries in the Oakland area. I found a few places that sounded good, but many only served dinners. I am only in the city during the lunch hour most days so that wasn't going to work. A few more minutes perusing various articles brought me across Bellanico, a newish place I had not yet heard of or tried. It is in the Glenview District of Oakland. That's close enough to my office to make an hour of it, so we headed out to test the waters.

We got there, found parking pretty easily around the corner, and since it was late in the lunch hour, the place was already full, so we were seated at the bar. Our partner in food crimes loves to be seated at the bar, he feels it gives you a connection to the establishement and its management that you can't get any other way, and on this occasion he was right. The proprietor, Elizabeth, was extremely helpful in assisting us in selecting a wine, as well as our food choices. Elizabeth was interactive and very attuned to the comfort of her customers, without being at all intrustive. I love Malbec, and on her recommendation we chose a Tiza from Argentina. She has worked with wines for over a decade and she definitely knows her stuff. The Tiza had a ripe, lush aroma, leading into a tangle of rich berry and spice -- complex and sexy, just the way I like it. The three of us shared a bottle between us.

The wine was the perfect beverage to set off the food, which is primarily Italian. The menu here is done with amazing care and inventiveness in presentation. I am second-generation Italian, and I was raised on cuisine from Northern Italy. I know good Italian food when I taste it. This food was both beautiful and perfec 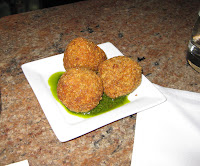 We began with one of the house specialties, Fried Mondeghili, or meatballs, with Salsa Verde. The dish comes with three large meatballs, encrusted with breadcrumbs and fried to a perfect golden brown. They have a soft, herby center underneath the hot crusty surface and the sauce keeps them from being too dry. I thought they were delicious, and I believe between mouthfuls, my companions did as well.

We also had the Burrata appetizer. It was served with lovely sides of toasted foccacia bread, fresh pomegranate seeds, taggiasca olives, grilled chard and toasted hazelnuts. Burrata, in case you don't know, is a fresh mozzarella that has been filled with a whipped center of cream and more fresh mozzarella. It's the Italian equivalent of a cheese jelly doughnut. The burrata served at Bellanico was as fresh as anything I've had in Italy. One of the best things that has happened to food these days is the emphasis on freshness. Fre 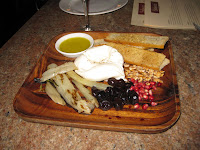 sh mozzarella that has been spun and cut that day or the day before, is a completely different animal from the chewy dense cheese they sold in the supermarket to put on pizza when I was a kid. They bear almost no resemblance to one another. Anyway, this burrata was not only fresh, but the center was so creamy that the cheese could be easily spread on the toasted foccacia that came with it. The PFC loved it with the pomegranate seeds, I found mixtures of various toppings to my liking. All were delectable. I couldn't get enough of the explosions of complex flavors that were singing in my mouth.

No sooner had we polished off the apps than we were served the first of our lunch mains. We'd let Elizabeth know that we wanted to share everything. Sitting at the bar makes it easy. So she suggested bringing share plates to make it even easier to sample a bit of each dish selected. The first of these next dishes to arrive was the Proscuitto, Onion and Fontina Frittata. I should say that a good frittata is one of my HUGE weaknesses. I grew up with my grandfather's which was a pan-fried variety with a great deal of vegetables as its base and which, once cooked was a heavy (in a good way), rich almost quiche like dish. But, there are many ways to approach a frittata. Bellanico's was a yummy concoction of egg and cheese that was as light and fluffy as a towel pulled straight out of the dryer. The flavors were well-balanced between the cheeses and the proscuitto. They worked together rather than competing with one another. It was delicious.

Next they brought us t 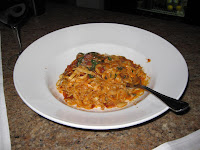 he Tagliolini Pepati. This is a lovely smoky hot pasta with one of my favorite combinations: tomatos, bacon and heat. The bacon was this magnificent pancetta-style meat that added so much to the pasta. I get weak in the knees over that sweet chewy texture of the bacon when it's coupled with the heat of a good hot pepper (in this case just the right amount of fresh jalapeno). When these ingredients blend into the roasted tomato sauce, there is for me the perfect marriage of flavor. Top it off with a nice grating of grana padano (a lovely aged cheese similar to parmesan) and you have the perfect dish of pasta. Our PFC agreed that this dish was spectacular, but we have very similar tastes in food. We both love heat.

Moments later, if not simultaneously (when I'm eating this well, all is a blur) we had been served another dish. The menu called it a Swiss Chard Malfati, and they arrived looking like little green goose eggs. They are accompanied by a glaze of brown butter & sage and are also topped off with the grated grana padano. (sorry we did not get a good picture, we ate them too readily I'm afraid!) Oddly enough, this dish was eerily evocative of my grandfather's frittata. Much more so than the previous dish that was actually called a frittata. I believe this is because the primary flavors of the Malfati were the spinach and cheese, rather than the egg, which serves as more of a binding agent than the main ingredient. Needless to say I found them sensational as well. I don't know if it was that they were so much like Grandpa Gianni's frittata, which is heaven, or if they were just that good on their own. I suspect is was a little of both. 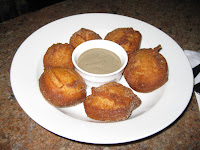 Since everything up to this point was amazing, we couldn't leave without trying their desserts. We ordered the Bombolini and the Goat Cheese Cheesecake. The Bombolini were a lovely fried doughnut "hole" of sorts, rich and sugary. They were deep fried, but not overly greasy and the spicy dipping sauce, described as an "espresso custard" was a nice sugary taste with the fried doughnut.

The Goat Cheese Cheesecake sounded unusual, but Elizabeth assured us that we would enjoy this dessert. She had not steered us wrong yet, so we told her to bring it on. What we were served may very well have been the best cheesecake I have ever tasted. It was an airy puff- 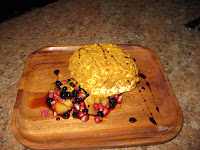 pillow of cheese, gently rolled in pistachio brittle, and served with a nice side of quince, huckleberries and pomegranate. The song of flavor experience while consuming the burrata now became an aria of absolute delight.

Two of us polished these off with perfectly-foamed cappucinos, while the BH enjoyed a lovely milky latte.

This restaurant was amazing. We all left trying to figure out how, with the busy holiday season ahead, we would ever return fast enough. Bellisimo! I say definitely check it out and Bon Appetit!!!!

Dining time: leisurely (but could be done in an hour)
Noise Level: boisterous, might be difficult for some to hear
Cost: moderately expensive (really depends on how many plates, we ordered a lot)
Table size: can't comment, ate at the bar.