THE BASIN (Saratoga) ~ Shelter from the Storm

It was freezing when we arrived at The Basin Restaurant in Saratoga, especially for a California native like myself. My companions and I were shivering in the blustering winds, having arrived before the restaurant was open for the dinner seating, but the host of the Basin Restaurant caught a glimpse of us and came to our rescue. He greeted us in the doorway, mercifully allowing us all to enter the restaurant before they were done setting up. Once we were seated and the feeling began to return to my fingers, I picked up a menu and began to peruse my options. 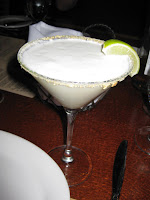 rneyed out of our comfort zone all the way down to Saratoga in search of a lovely meal before our evening's entertainment, which on this occasion was a Richard Thompson concert at the Montalvo Winery Carriage House. I do love me some RT. But I digress.

So, I am already feeling warmly towards the management for showing the class to rescue us from the storm outside, but nothing heightens a good mood better than a cocktail, so we ordered a round. I had something called a Key Lime Pie which was, at first sip, almost indistinguishable from the dessert itself. Frothy, fluffy top with a deep limey kick at the bottom.

My Better Half had something called a Spicoli, which was a rum drink that was neither daquiri nor pina colada, but better than either. Malibu Rum blended with pineapple, orange and banana, with a hint of creme de cassis, the "cherry on top" so to speak. Fruity and refreshing and well-blended. I have become a huge fan of mixology. Drinks used to be so uninteresting. One could order either some version of a sickly-sweet drink mix over-the-top fruity concoction 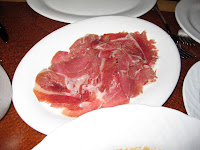 or straight scotch/vodka/gin whatever over ice. I like that mixing a cocktail has become an art. It's definitely an improvement.


Having just had a magnificent Burrata at BellaNico restaurant in Oakland, and so I decided it would be nice to share the delights of this particular treat with my sister-in-law who shares my love of all things cheese. We ordered the burrata along with a platter of Jamon Serrano Iberico ham, the 'prosciutto of Spain.'

The burrata was good, a tiny bit drier than the one I'd just had previously at BellaNico, but nonetheless a treat. My com 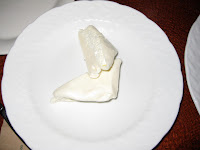 panions who had not shared in the burrata of the previous week were extremely pleased with its selection and really enjoyed their first taste of the soft white cheesey treat that is burrata. The ham was delightful as well, and I should note that although pricy at $20, the serving presented us was beyond generous. I was raised on prosciutto, which is quite similar to an iberico. The differences are in the curing, the various amounts of fat in the meats and the spices used in it's preparation. I find I love almost all varieties of this particular charcuterie choice.

On any occasion, I find a slightly dried slice of salty goodness wrapped carefully around a similar slice of fresh sourdough bread, with or without a nice smear of soft burrata, can't be beaten for anything. It's just the perfect mouthful, although I must admit I have trouble stopping, too much childhood tangled in sensory memory I suppose. 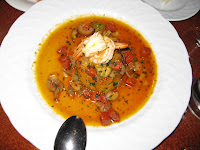 As I looked up from a bite of ham, the waiter brought the next dish, which was their Spanish Rice. For some reason it was not what I anticipated at all, but instead was much better. At the center of the dish was what I would call a rice-cake, softer in the center and flavored with a delectable broth. At the edges it was crunchy and texture-filled, like the crust of a perfect paella. The shrimp itself was still moist, removed from heat during it's preparation in that just-perfect moment after pink turns to white without losing the juice within. Seasoned with paprika and saffron, the dish was an ecstasy of surprises, with tiny chunks of sweet, fatty bacon, crumbles of chorizo sausage, and other goodies colliding like some lyrical corps de ballet dancing in my mouth. At one moment it's a solo, seconds later the entire ensemble is leaping together, and all of it is bathed in this spicy, buttery sauce. This dish just rocked my world.

The soup special that night was a Butternut Squash. It was blended with cre 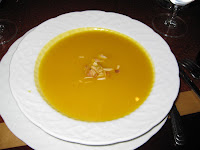 am, and --- I'm guessing here--- riced to perfection. Just enough texture to allow the flavors to come together in the eating. Splendid.

Our mains arrived shortly afterwards. One of us had the Handmade Daily Ravioli, the centers of which were a cheese and spinach filling with a blanket of lovely soft fava-bean pesto. Creamy and delicious.

My BH had the Dungeness Crab pasta, which was served perfectly al-dente, after having been flambeed with a cream & tomato sauce enhanced with pernot, shallots and garlic. My husband loved the delicate flavors all tumbled together with the seafood. Spot on. 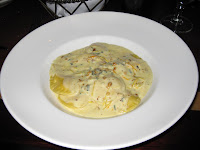 I thought my own dish, which was the Duck Special was amazing. The duck meat was rich, without being gamey, and it came on a bed of wild rice with a captivating golden sauce of onions, herbs and some sort of sweet fruit blend covering it all. In my delight at the perfection of the dish's taste, I neglected to jot down the specific ingredients of the sauce in my notebook, so you'll just have to imagine that combination of sweet and savory that compliments the richer meats to perfection. It was j 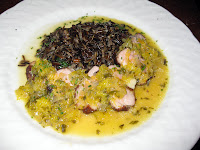 
We topped off the evening with a dessert called a Chocolate Bomb, a version of the now popular molten chocolate cake (which is a cakey on the outside, melted brownie goodness on the inside delight). It had a lovely reduction of raspberry beneath it, to balance the extremely rich, dark chocolate of the cake itself. That dessert and our cappucinos and lattes were all a delightful topper to an all but perfect meal. 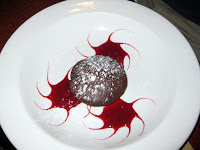 I highly recommend The Basin, and can't wait to see another show in Saratoga as an excuse to visit it again. In the interim, I intend to hit the Plumed Horse for my birthday in a week's time, and will certainly report on that trip as well. Check it out, and Bon Appetit!


Cost: Moderately expensive
Table size: adequate
Noise Level: perfect for easy conversation
Dining time: somewhat leisurely, had to hustle to make the show, but did make it.
Posted by The Food Apprecianado