A few weeks ago on a Tuesday night, the Bh and I were finally convinced to try out the scene at Adesso, a happening little gem of a restaurant that has modeled itself after the Italian osteria.  Cured meats and wine, and a lovely spread in the late afternoon. Free. Yes, you heard me correctly.  When we walked into the Happy Hour at Adesso in Oakland, I knew I was definitely not in Kansas anymore. 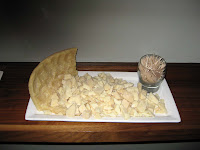 The space is small, the food is varied yet simple, and the bar is well-stocked. This little gem reminded me of Italy in a big way.  Situated as it is at the tip of Piedmont Avenue, the parking is tricky.  Street only, and not a lot of it, but it can be done.  They offer the free aperitivi every night from Monday through Saturday. They put platters out right at five o'clock and again at six.  I believe they put them out just before closing as well, which varies from 10:30 to 11:30 depending on the night of the week. 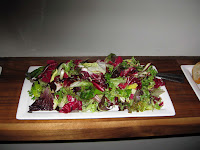 I do not know the names of everything they served on the buffet wall.  The pictures will, on this occasion, have to suffice.  In addition to the free aperitivi, I ordered a platter of their sopresato, which is a thick salami like meat that was delicious.  Various sausage-y meats and cracked pepper were all I could readily identify.  I believe all the meats are prepared on site.  Adesso has a full bar, and makes really tasty drinks as well.  One of us had a Grapefruit Gimlet, and I had this spicy ginger beer & tequila affair that tasted home made. I've never tasted home made ginger beer before, and I loved it.  It complemented the tequila perfectly. 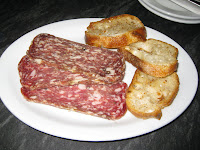 This isn't the sort of meal I can wax prolific about.  This column is more of an amouse bouche.  A party of any size could fill up on their buffet, or augment it with some of their fantastic house meats and cheeses.  Essentially, the place reminded both my husband and myself of our first night in Venice.  We'd taken the taxi-boat into the heart of the City, and walked from our hotel looking for food. It was five o'clock there too, and in Italy, that is nobody's dinner time.  We were jet-lagged and hungry and so Francesco at the hotel had suggested we try a local osteria, where he was sure we could get meats, cheese, and a glass of wine to quell our appetities.  It was the BH's first meal in Italy and it really stuck, so eating here, at Adesso, woke up that adventure for him in a palpable way.  But isn't that what dining is all about? 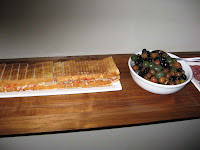 I believe that just about anyone can find something here they will enjoy.  If you haven't been yet, do take the time to check it out.  Being free, the food goes quickly, so I would suggest you get there on time (either right at five or six when they set out the trays) Bon Appetit! 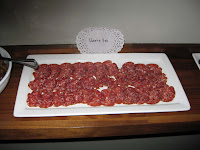 
Note:  We arrived at about ten-to-five, and were not admitted.  They weren't ready. When they say they open at five, they mean it, and not a moment sooner.  As promised, they did open their doors promptly at five.  Be there on time, and be ready for a treat. 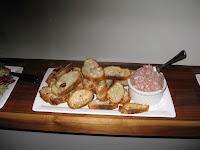 Table size: we ate at the bar, so no idea but they looked adequate.  The bar was spacious and it had lovely little purse hooks underneath it which made a nice place to stick my bag, which is big.  Ladies will appreciate this feature.
Noise Levels:  As of today I will be using the SF Chronicles rating system for noise, for purpose of standardization.  They rate noise as follows:
ONE BELL = Pleasantly quiet; TWO BELLS = Can talk easily; THREE BELLS = Talking normally gets difficult;  When in full swing, Adesso is noisy folks.  It's a bar. FOUR BELLS = Can talk only in raised voices; BOMB = Too noisy for normal conversation.
Posted by The Food Apprecianado