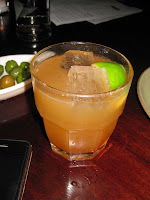 About a week and a half ago my husband had to attend a mediation. We work together, so I was left ‘abandoned’ in Oakland over dinner-time while I waited with the car to see if he’d need me to bring him home. I saw this opportunity for what it was, a chance gift from the gods to get to one of the many restaurants I’ve been dying to try in Oakland that are not open for lunch. I have a long list of selections that only serve dinner. So here an opportunity was presenting itself for me to try one of them. How fortunate for me!

As I was reviewing my list, I came across a particularly intriguing name “Boot and Shoe Service.” That name itself conjured up an image of my grandfather, who was a magnificent cook. He arrived in this country in about 1917, fresh off the boat from Italy. His first stop, so the story goes, was on Park Street in Alameda. He had visited a dry goods and shoe repair store to get his shoes re-soled. When they were ready, he complained to the cobbler who had fixed them about the shoddy job he had done. My grandfather said that he could have done much better. The cobbler replied “Then go ahead,” and invited him into the shop. It seemed to be a challenge, and my grandfather liked nothing better. My grandfather loved to tell us how he not only repaired the shoes, but did the job so well that he was hired on the spot to work in the store. He ended up owning the store in under a year. 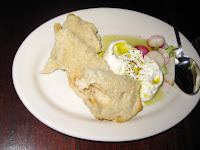 With it’s serendipitous name choice evoking my family history, and given that Boot & Shoe serves Italian food, I decided this was tonight’s winner. Founded and co-owned by one of the pizza chefs formerly with Chez Panisse, I figured that my odds for a good meal were high. I called the Grad Student, a favorite eating partner of mine, and we were off to eat up.

We got there a bit early, and they weren’t open (seems to be happening to me a lot lately!) We stopped in next door for a cup of tea. It was cold and rainy out, but we wanted to maintain a pair of healthy appetites. We started with drinks. I had a tequila concoction that was really tasty. Smooth with a kick of bitters to follow the taste down. It never ceases to amaze me the things they can do with liquor these days. At first we missed the bar altogether, as it is located in the far back through a narrow doorway. It’s almost like a hidden secret room. Gives the area itself a cool mystique, while helping to keep the noisy bar crowd from completely overwhelming the eating crowd. Probably a coincidence of the original architecture, but pleasing, nonetheless.

The grad student ordered a wine, and the waiter was extremely helpful. She wasn’t sure which of the two reds she was thinking of would be the most to her liking, so they brought her a tasting of each. It was a classy touch and allowed her to select a wine with certainty. I love thoughtful customer service.

After we settled in with our drinks, we were all over the menu in search of a couple of apps. We ordered the Burrata & Radishes because, well because it was on the menu and neither one of us can resist a shot at a good burrata. This one was magnificent. It presented as a soft, buttery whipped mass of creamy cheese. So light it might as well have been clouds. Really melt-in-your-mouth perfection. The addition of just a hint of olive oil drizzled over the cheese and the crunch of the radishes offset by bits of delightfully bitter arugula, really an outstanding dish. 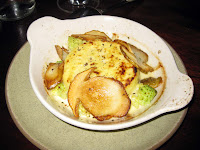 We were sitting there drooling and thinking there could be nothing tastier on this earth, when we were presented with our next appetizer. It was a Sunchoke Sformato. We’d ordered this dish because we were curious. Sometimes curiosity doesn’t kill the cat. Sometimes it makes for purr-fection. This was one of those times. It was essentially an egg dish, a bit like a souffle, but smoother. Something like the consistency of pudding, but savory rather than sweet. It is very, very difficult to describe just how unexpectedly different the taste and texture of this dish is. The surprise texture, the addition of the Porcini Mushrooms and Romanesco Cheeses blended into the eggs... I can say only that the experience of tasting it, coupled with the element of surprise at it’s unknown qualities making themselves known, made eating it delectable. It was a home run. 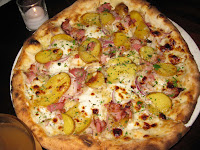 We capped off our meal with the obligatory Pizza. It is, after all, a pizzeria. I am really really fussy about pizza. I don’t have a thin or thick crust rules fetish or anything, I’ve actually been known to enjoy both. The heavily laden pizzas I grew up with at Granata’s in Berkeley were my idea of heaven for years. Now I am just as happy eating a thin crust from Dopo, or the ever evasive “perfect Chicago-style thick crust pizza” which are okay at Zacharys’ but not anything that really moves my soul. The pizza we chose this evening was a Potato, Fontina, Pancetta and Rosemary mixture. It had a lovely crust, thin, but not super thin. The flavor was consistent and I enjoyed the herbs used in the seasoning. But it was just good. Nothing about it that I found particularly inspiring.

At this point I wanted another drink, but I got a call from the BH to let me know I had to drive home, so the second drink became a House made tonic. Gotta drink responsibly, after all. Frankly, I was rewarded for my responsible choice as it was remarkably delicious. The drink was sparkling and intense, crisp and tangy, its fresh ginger palpable in the mix. Not sure what else they used to concoct it, but I would definitely order it again. It was not just really good, it was splendid.

That was pretty much the meal in toto. A late night at the office salvaged by a good meal (I was feeling sorry for the BH, but he ended up having dinner in the City, so hey, he did okay. Isn’t that always the way?) Definitely check it out. I’d order one of the other pizzas unless you are really fond of potato. Bon Appetit!