Except that my Grandmother was Italian, and never made ceviche in her life.  I don't think I even knew what ceviche was until maybe a few years ago.  My oldest daughter is a quarter Peruvian, but I digress. 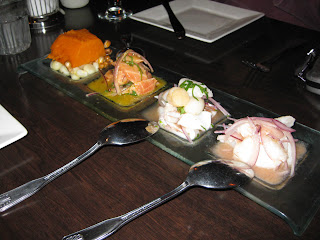 I ended up in this little gem in the West Portal district of San Francisco through the suggestion of a friend.  Thus, while it's a find I cannot take credit for, it's one I really enjoyed. We were joined there by said friend (who lives close by) and her lovely daughter, in town on break from studies at Harvard.  This friend is aware that the BH and I have become endlessly fascinated by various food establishments, and in her words, this was the "most interesting restaurant" she could think of to bring us to.  How thoughtful of her to make such an excellent choice.

When I think Party of Four, I think in terms of quantities of appetizers!  I mean, that's enough people to order at least three apps, right?  We arrived hungry, and a few minutes early for our 6:30 reservations.  The place was pretty full.  There were only two tables, one right in the doorway, and a nice big six top in the back with comfy banquette seating.  Fortunately, they were kind enough to allow us the slightly bigger table away from the door, which after my near refrigeration at Sala Thai, I was prepared to argue for, but thankfully there was no need.  Victorious in my non-battle, seated and with a menu, I began my meal with a glass of wine.  The BH and our companion shared a pitcher of sangria.  I ordered a Malbec, but the waiter said they had just run out and he offered me a blended Malbec.  I found the compromise quite tasty. 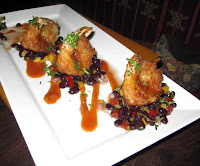 Our companion was interested in sharing a platter of ceviche. They have quite a few selections of ceviche at Fresca.  It would seem to be a specialty of the house.  Some of you might remember I am always on the hunt for ceviche that can compare with the amazing taste treat manufactured at Tamarindo in Oakland.  I wasn't sure this would live up to my expectations, but life is after all an adventure.  I'm always willing to try something new.

Fresca has maybe eight different ceviches, all prepared on the spot.  Our companion has a soy allergy, so he offered to make them soy free and informed us they can be made to order.  Though they have sampler plates of up to five of the multitude of offerings, we decided three was sufficient to try on this occasion.  We ordered their Trio of Ceviche - which resulted in a platter containing three different ceviches with a nice offering of sides.  The first we tried was the Ceviche 5 Elementos (described as the tradicional peruvian ceviche; halibut, lime juice, rocoto, red onion, sea salt)  The next was the Ceviche Mixto (menu: squid, halibut, prawn, clam, cilantro, red onion, rocoto aji, lime juice, sea salt), and finally we had a Salmon Ceviche  (salmon, passion-fruit, lime, pink peppercorns, cucumber shiso leaf, andean corn, cancha).  I was impressed.  In my mind Ceviche must be prepared carefully or it's either too fishy or too chewy.  I've had ceviche that was only edible, some that is good, but few that are actually great.  This was delicious. The sides were yams and (I believe) some lovely pickled mushrooms.  The blending of the savory salmon with the yam meat was the most stunning.  It was a perfect study in contrasts.  My mouth rang with the gentle savory meat of the fish, the citrus of the ceviche pickling sauce and the soft sweet cream of the yam.  The fish was tart, well-seasoned and extremely moist. An absolute hit.

The next appetizer we tried was a dish called Camarones Chícama, or coconut-crusted jumbo tiger prawns.  They sat atop a black bean salad, with what they described as a lucuma-orange glaze.  No idea what lucama is, but these shrimp were cooked beautifully, and the crunchy-coconut sweet outer shell soaked up the glaze, the meat inside was moist and laced with a hint of the seasonings it had absorbed from its marinade.  Combined with the beans and corn salad beneath, and the tang of the dressing... another impressive offering.  At this point, I'm thinking this place was on a roll. 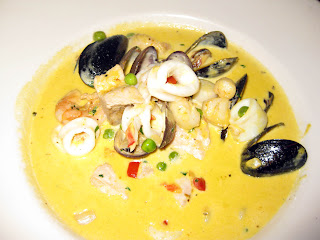 The last of the appetizers we sampled were called Tequeños, which though dubbed a fried wonton filled with shrimp and crab cream cheese, was more of an eggroll filled with plain soft cream cheese.  The promised flavors of crab and shrimp did not properly materialize, bur rather were a tiny presence, sadly overwhelmed by the cheese.  The crust of the wonton was slightly greasy and was too heavy for the filling.  It might have worked if there was some texture from the crab and shrimp, to cut a bit of that cream chees, but the only thing I tasted was a mouthful of cream cheese.  The dipping sauce, (an lovely light aji amarillo aioli) added some tang, but not enough.  I found this dish not well thought out, and not as flavorful as I’d have liked. At least the side salad that came with it had an lovely chunky tomato salsa in a perfectly seasoned vinaigrette that was quite good.

The BH ordered a Chupe, which is a creamy seafood chowder.  The menu listed its ingredients (other than the seafoods) as andean corn, potatoes, rice, green peas, aji panca, poached egg.  When it arrived the poached egg sat on top ominously (the BH is not normally a fan, though I am) but to my amazement he gave it a try and he loved it.  The soup was full of various fresh fish, mussels, shrimp, everything from the ocean but the kitchen sink.


I ordered a variation on the seafood stew, I think it was called Picante de Mariscos.  Mine also had a creamy base and much of the same seafood, but it was much spicier.  This dish was the sort of thing I dream about at night.  I've often written how much I love heat in my food and this was hot.  Really spicy, but not so much so that it made the dish difficult to eat, or wiped out the other flavors. It was spice perfection. Every bite was creamy, with the flavors dancing on the palate until the heat made it's appearance, like the finishing kick at the end of a jig.  There was just a tiny bit of sweetness blended into the broth at the base, but the dish was mostly a savory one.  Though it was slightly reminiscent of a curried coconut broth, it was not exactly a curry, nor was it coconut flavored.  It was unique and absolutely delicious. All the seafood was remarkably moist and tender as butter. Not a bit overcooked or tough.  I have never had calamari that tender.  Never. 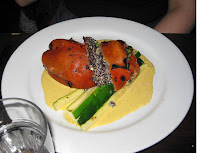 Both our companion and her lovely daughter had the Pimiento Relleno, a bright red bell pepper stuffed with a rich quinoa vegetable risoto, manchego cheese, and asparagus, and topped off with an aji amarillo cream.  I tasted it and the ricy filling was good.
We left happy and satiated.  I loved my stew so much, that, even though I was stuffed, I just kept eating until there was a sad, empty bowl before me.  You know that feeling you get when something you really loved eating was completely gone?  Sadness.  But a good kind.

I know it's a bit off the Oakland trail, but if you're hungry and in the City, check it out.  They've got several locations, and I'm guesing the food is as good at all of them.  The menu is pretty much the same.  However, if you've been to one of the others, let me know.  I know if you visit this one, you won't be sorry.  Bon Appetit!

Noise level: fairly 'busy' might be hard to carry on a conversation for those with difficulty hearing
Table size: adequate
Cost: Reasonable (Soups/Stews 18, apps 12 -ish)
Posted by The Food Apprecianado