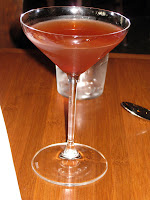 Another day finds me on yet another search for food adventure.  Always on the hunt for new Oakland eateries (particularly those near my office that offer lunch) I came across today's target, Sidebar.

Sidebar is a relatively new Gastropub currently occupying the site that formerly housed Trio Bistro and Grill, on Grand Avenue, right between Coach Sushi and Zza's Pizzeria.    More interesting to me on this venturing out, was the history of the site.  Before it was Trio, it was an amazing French Bistro called La Brasserie.  Both restaurants had essentially the same ownership.  I never went to Trio, but I spent a lot of time at La Brasserie.  Roger Martin was a delightful and handsome Frenchman who hosted the guests.  In the years I frequented his establishment, I grew exceedingly fond of him.  His wife, Kim, was the chef, and always in the kitchen.  She was however, perhaps one of the best chefs I had ever come across.  This was 1978, a time when more restaurants had fry cooks than chefs, never mind female chefs, and Kim could easily hold her own against many chefs of today.  She was just that good.  I can still taste the  perfection her Coquilles St. Jaques. I have yet to taste its equal.  So hats off to the Martin family.  Wherever you are, know you made an lasting and wonderful impression on those of us who appreciate the ritual fo dining. 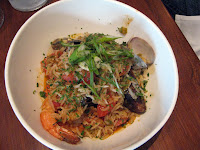 This is what is on my mind when we arrive at Sidebar.  The amazing food-karma history of the place smacks me in the face when we enter.  It is of course, different now.  Nice different, with a large open almost circular bar filling the center of the space.  Modern different, with hipster decorations and a youngish vibe.  But nothing off-putting.  This is what happens when you live in one place for a long time.  Things change.  It's the way.  But I'm here and I'm hungry.  So I shake off the Ghosts of Restaurants Past, sit down at a table an give the menu my undivided attention. 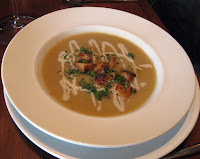 First up, the drinks menu.  They have a nice cocktail menu, most offerings varieties of standards from different decades around the country, recipes from different bartenders.  This menu has a lovely little twist: they have a "Classicist" version of each drink, with what one might call the more 'expected' ingredients, and a "Locavore" version, which is a spin on those ingredients that is all found locally or made in-house.  I ordered the Clover Club which came in two 'flavors' as well.  I requested the Locovore version, intrigued by the idea of House-made Grenadine.  Next time I'll try the raspberry syrup. [Classicist:  Gin, raspberry syrup, lemon juice, and egg white. Old Waldorf Bar Days, Albert Stevens Crockett (1931); Locavore: No. 209 Gin, House-made Grenadine, Meyer lemon juice, and egg white.]   I loved the presentation.  The drink was fluffy, light, and gently sweet, (a bit like a traditional Ramos Fizz), but with a strong kick of gin to keep it from being overly saccharine.  It was splendid.  My Better Half had a Castle Harbor Special, he had the Locovore version as well, which was billed as Charbay Rum, Small Hands Pineapple Gum, and House-made Grenadine, and lime juice. [Classicist: White Rum, lime juice, pineapple juice, and grenadine. The Gentlemen's Companion, Charles H. Baker (1946)]

At Sidebar, the bread served is Acme.  They offer those big sourdough twists, that can be taken apart into separate mini-rolls.  This is my favorite sourdough --- I first had them at Luka's Taproom.  The crust is crunchy perfection without being dry, with that soft aerated center that can be peeled away to reveal even more crust. Gotta say we could have used a  bread plate though, but we were given nothing but the bare tables.  Not a critical flaw, just odd and a bit messy. 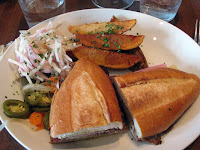 I think we all ordered the Potato Leek Soup it was cold out, and we were chilled to the bone.  It was served piping hot, a velvety cream of potato that tasted like French Onion Soup. It's consistency was good, it had body and a hint of texture, but remained creamy and satisfying.  The flavor was excellent, an oniony blend of caramelized leek and potato.

I shared two dishes with our PFC.  We had the Jambalaya a blend of Andouille sausage, shrimp, mussels, clams & basmati rice.  Being a fan of true New Orleans food, particularly authentic Jambalaya, I was at the same time apprehensive and excited to try what might be a find.  Real Jambalaya closer to home!  When it arrived it was in no way a letdown.  A spicy, seafood-laden dish, perfectly seasoned, rice awash in a  flavorful sauce. 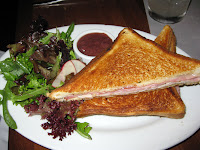 PFC & I also shared the Roast Pork Sandwich, which was described as seasoned and sliced pork with gruyere and ham. It came with a side of jicama slaw, a well-pickled vinegary affair that when layered onto the sandwich with the jalapeno relish, made it all somewhat similar to a Banh Mi. The soft warm bread over the tender pork meat, , the salty ham blanketed in a thin layer of cheese.  The final perfect touch the sweet, hot kiss of the jalapeno relish.

The Better Half enjoyed his Monte Cristo Sandwich, a lovely concoction of  Niman Ranch applewood smoked ham, smoked turkey, and gruyere which was essentially a "just like mom used to make" grilled cheese, but with a flair all their own.  It had a nice little seasonal compote on the side and he seemed to love it.


Since we were so pleased with the food at this point, we opted to order a dessert.  There were several choices that appealed, but I was drawn to the Cornmeal Pound Cake.  I won, and noone was sorry I did.  The cake was absolutely stellar.  Now, I must preface this with my love of sweet corn. I love cornbread.  I love sweet white summer corn. Really really love it.  So, that said, this dish was amazing.  It had the texture of a medium rough cornbread, moist and dense like a pound cake on the inside and a touch crunchy on the outer, all imbued with the taste of butter.  Really an inspired take on an old standard.  Add mascarpone whipped cream and voila!

We will most definitely return, and soon.  If you find yourself in the neighborhood, you should check it out, and as always Bon appetit!

Dining time: easily back in an hour

Noise level: was okay for us, but with all that wood and windows, it might possibly be too loud for some