MISS PEARL'S JAM HOUSE - Pusser Up and Kiss Me!

By way of a little Oakland History, Miss Pearl's Jam House on the wharf in Jack London Square, is located in the building that used to house Jack's Bistro (also named for Jack London, as many things are in that part of town).  Jack London, Oakland's adopted native son, was a seaman and author who spent much of his time on the Square during the turn of the previous Century. The First and Last Chance, is a watering hole he frequented that remains to this day, a favorite of tourists.  When Jack's (the Restaurant) originally opened in this location on the Square it was one of the earliest additions to the first wave of a commercial and culinary rebirth of Jack London Square, which over the years had fallen into disrepair.  Since then, many new additions have come and gone in this part of Oakland.   Though she has spent much of her time as San Francisco's overlooked and underappreciated step-sister, Oakland is a City with a character and personality all her own, so it has been wonderful to watch its renaissance.

The building that houses Miss Pearl's is next to the site of the old Waterfront Hotel.  I remember walking past it as a child, on our way to eat at the Sea Wolf that sits out over the water.  The building is in a nice locale, also right on the water, with a beautiful view.  We went there for lunch on the Tuesday before Christmas. 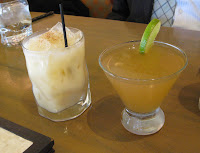 Whenever I eat at Jack London Square, I can't help but remember my childhood.  From the time I was three or four until I was eleven or so, I visited one of the restaurants here for dinner with my Grandparents almost weekly.  We ate at what was then the Sea Wolf (now Scott's Seafood Restaurant), or the Grotto (now Kincaids).  Everyone knew my grandfather, and we were always ushered to our table with a great deal of attention.  At Scott's I would always order the same thing.  The shrimp cocktail and a filet of sole.  Grandma always let me have a Shirley Temple, as she ordered a Grasshopper for herself.  Though the setting is different, the environment is unchanged.  The view of sailboats slowly leaving the estuary for the open Bay, the bustle of the wharf and the smell of Jack London's mighty blue ocean.  All these things I have come to know and love, then and now.  It is easy to feel the spirit of Jack himself when dining on the Square.

I like Jack London Square and its history.  It's a charming place to eat, and Miss Pearl's has some interesting items on the menu, many of which feature the flavors of the Caribbean.  We began our meal with cocktails, and I have to say, the mixed drinks at Pearl's are awesome.  They are freshly blended by a skilled mixologist and it shows.  My husband and I are both fond of one called the Pusser’s Painkiller.  It's a creamy combination of citrus and coconut --- tangy and refreshing at once.  The coconut gives it an eggnog-like quality, and the tang comes from a bit of fresh citrus.  It's a creamy sip of heaven with a kick.  Another of the house specials is the Hemingway Daquiri, which is a more robust, MAN drink, cut with just a dash of lime.  One can imagine Papa H consuming such a drink while smoking a cigar on a veranda of a summer afternoon.  Since Papa H himself was not there, our Partner in Food Crimes enjoyed one on this occasion. 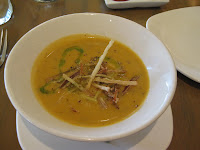 Our cocktails were rapidly followed by bowls of steaming hot soup.  Our PFC has a thing about the temperature of soup.  It has to be hot, not merely warm, and certainly not tepid.  While I'm not as soup-temp-obsessed as my mate, I do prefer my soup hot when it's cold outside.  I think it's a childhood sense memory.  Hot soup = comfort.  Or perhaps it is as simple as soups warms me up.  Either way, the soup today was a lovely Cream of Garlic and Potato Soup, that had been blended or riced really well into a smooth concoction of potato-ey goodness with a lovely topping of deep fried leeks that gave leant a terrific crunch to the spoon, for a great contrast in textures.  The soup itself had a good deal of flavor, and was well seasoned.  Its "backbone" was the potato, but there was a noticeable kick of pepper mixed in with garlic and onion to balance it out.  We all enjoyed every last drop.  Kudos to the Chef. 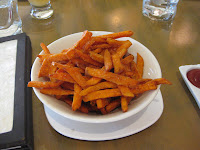 I forgot to mention that we also had Sweet Potato Fries with our cocktails.  Sweet Potato Fries are becoming more common these days, but I really like the way they do them here.  They are slender and crispy, well cooked and seasoned, served with sides of  spicy chipotle aioli and bbq catsup.  Yum!

For our main our PFC and I ordered the Grilled Jerk-Marinated Chicken Breast.   We both really seek heat, and whenever a place lands that delectable combination of "sweet heat," we are going to come away very happy campers. The chicken in this case was spiced to perfection with a crunchy golden brown skin wrapping the still moist but not undercooked meat of the chicken breast. The starch was a lovely mixture of rice and tiny, delicate beans that finished off the plate quite nicely.  When a nice sauce is to be consumed, nothing carries it to the palate better than a bed of well prepared rice.  The flavor is absorbed and seemingly multiplied by the rice as it makes its way to the mouth.  Good times.  We both loved the heat in the habanero reduction, and thought it mingled perfeclty with the slightly sweet jerk. 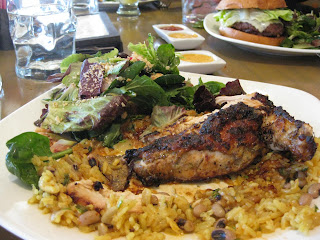 The BH ordered the Bahamian Burger.  It's a nice juicy ground beef patty on a soft, sweet Challah Bun.  The condiments are traditional with a twist, grilled onions and Island-spiced Catsup.  The burger itself was large, and the BH said it was cooked perfectly to order, which in this case was ‘medium rare.’  He loved it.

We declined the offer of dessert, although tempting. Some days one has to leave something undone.  All the more reason to go back.


Miss Pearl's is a nice place for a tasty meal with a good view.  The cuisine is not necessarily 'inspiring' but it is solidly prepared and the cocktails are stellar.  check it out, and Bon Appetit!
Miss Pearl's Jam House
1 Broadway
Oakland, CA  94111
(510) 444-7171
http://www.misspearlsjamhouse.com/

Table size: Adequate
Noise Level: Excellent, sound is well-muted.
Cost: moderately expensive
Dining time: we are able to be in and out in under an hour if need be
Posted by The Food Apprecianado