SALA THAI ~ Put the Love in the Coconut! 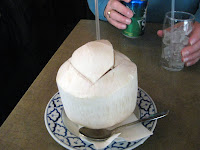 The BH and I found ourselves in Fremont on New Year's Eve.  We'd run to the Court to pick up some paperwork from the Clerk, and she asked us to come back in about an hour and a half.  So what to do?  Sala Thai is a local haunt we'd heard good things about so we decided it was a good idea to have lunch and return to the Courthouse after eating.

We entered the restaurant, which is in one of the many little strip malls that populate the neighborhoods around what I suppose one would call Fremont's downtown of sorts, or at least a business section of the City.   The restaurant is welcoming in that authentic way a restaurant can have of speaking to you with it's open spaces without saying anything at all.  Some places just whisper "Welcome."  The interior is moderately dark inside and decorated in traditional Thai decor.  It's not a very big space, sort of long and narrow like the inside of a ship, which perhaps is appropriate since it makes one feel as though one has traveled to Southeast Asia itself. 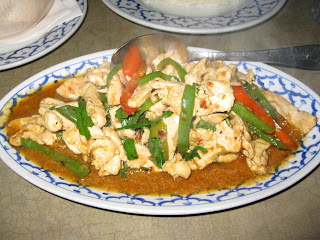 A staffer approached and asked us if we'd like a table and we said yes, but noted that we had to be out fairly quickly in order to make it back to Court in the tiny window we were given by the Clerk to return.  Once seated, the waiter arrived almost immediately with menus and a delightful attitude.  There are some people who are just meant to host others, they have a way of putting you at ease and settling you in.  This young man was one of those people.  I had the distinct impression he was vested in the establishment, which I would venture to say is a family operation.

I decided to order somewhat adventurously.  I've got several asian dishes I've come to love over the years, a few of which have vanished into the Great Closed Restaurant in the sky.  One of those was a dry-braised spicy green bean at a Restaurant in Oakland called Maple Village.  Those beans saw me through many a youthful overindulgence.  The menu at Sala Thai contained something called Spicy Green Beans, so I decided to try them, along with their Basil Sauteed Chicken, or Pad Kra Pow.   I also ordered Fresh Coconut Juice, something I just decided to try in a burst of impetuousness. 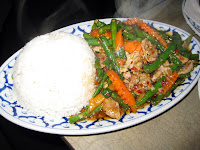 The Coconut Juice arrived first, arriving in the shell with a straw.  It was refreshing and not overly rich and I absolutely loved it.  The presentation coupled with the restaurant's interior made me feel as though I was sitting in a family place in the heart of Bangkok.  It was delightful.  Next arrived all our dishes, and in plenty of time for us to enjoy them and be out of there before our appointment back at Fremont Superior Court.

The BH had Thai BBQ Chicken, which was a moist mountain of smoky chicken goodness.  The spices were subtle and well-blended.   He was really pleased with this dish.  I found the Green Beans tasty, although not as similar to the original dish I so loved as I had hoped.  They were more meat than I anticipated, but that's hard to complain about.  And it was a really tasty dish.  Good amounts of heat, beans and meat.  My Basil Chicken was moist, succulent and the fresh basil draping itself around the slices of golden, browned chicken meat was simply heavenly.  Fresh basil and peppers meld together for the perfect blend of hot, sweet aromatic flavor that is one of my absolutely all time favorite combinations of taste.  To his credit, the waiter had suggested I not request any additional heat until I tried this dish the way the chef generally prepares it, which I appreciated.  They do this dish a little on the warm side.   I could have used more heat, but I tend to like things so much hotter than most, that it was good advice on his part for me to check it out first.  Nothing ruins a meal faster than a fried set of tastebuds. 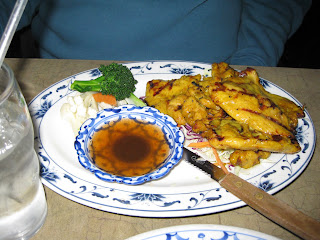 We wrapped up our snappy little lunch in about forty minutes, paid and were back on our way to Court, having found an excellent new choice for takeout in the neighborhood.  This is a great restaurant, food is fresh and really well-prepared, the staff is helpful, friendly and professional, and the presentation gives the
clientele the sense that they are in another country. How fun is that?

If you find yourself in the neighborhood, check it out.  Bon Appetit!


Table size: adequate
Noise level: Not too loud, but tables are a bit close together, so one shouldn't go there if you need to have an extremely private conversation.
Dining Time:  They are amazingly quick.  No problem.
Price: Extremely reasonable.  Good times.

One note:  We sat at a table right next to the door, and because it was December, and winter, it was freezing every time anyone came in or out.  Unfortunately this happened almost constantly, often with people standing in the doorway holding the door open for absolutely no reason.  So my advice is go for a table away from the door. At least until summertime rolls around.
Posted by The Food Apprecianado