When I first traveled to Italy in 1978, I wasn’t sure what to expect. My grandfather had spoken a lot of his family living in this little village nestled in the hills above Genoa. I was determined to find my roots, and after almost a full day of wandering about looking for directions to his former home, my companions and I were successful. We found the tiny hill-dwelling that had been the family residence for over a hundred years or more.

When we crossed that threshhold, my great-aunt, Grandpa’s sister Annunziata, and her son Nunzio, welcomed us as though we had known each other our entire lives. I must say that the pair of them lived in what most of us would term abject poverty. There was no glass in the windows and the floor of their home was raw dirt. In spite of what we might term hardships, she and her son fed myself and my three companions as though their cupboards were limitless. I am convinced the four of us consumed every bit of food in their home. Probably their store for the entire month. They treated us to homemade head cheese and other meats, cheeses, bread and grappa. This meal left me with an impression of the meaning of the spirit of true generosity that will be with me the rest of my life. It certainly proved good hospitality doesn’t have to be fancy. 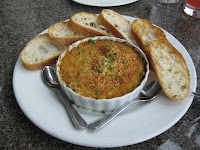 This brings me to my recent experience at Caffe Verbena in Oakland. When Verbena first opened, it was one of the nicest restaurants around Oakland at the forefront of the wave that was to come. Their house-made toasted focaccia bread, the fresh raspberry lemonade with simple syrup, pizzas fresh off the wood-burning, all were delicious. Dining there back then was extremely pleasant.

Things have changed and not for the better. Upon arriving, the BH and I had to wait for the hostess to arrive. And wait. And wait. When she did, she did not acknowledge us. At all. There was a party of maybe five or six that sort of pulled that ‘restaurant cuts’ people do, and she waited on them first. Okay, I’m thinking she’ll tend to us next. No big deal. We were only two and they were five. Fair enough. But then I see she is seating them in the chilly atrium that sits outside the restaurant. It’s maybe ten minutes to twelve, and I was really surprised that they were already full. After leaving the larger party in the atrium at a table, she retreated back into the restaurant proper. No hello, no “hang on I’ll be right with you.” Just gone. After another five minutes passes she comes back with napkins, silverware, a few dishes. She begins to set their table. She must have walked past us three or four times without ever saying a word. I couldn’t get her to make eye contact to ask her what the deal was.

When she finished with the party of five, I think she’s going to get to us. But a party of four had walked up and I guess she knew them, because she ushered them to a private table in the back of the restaurant.

After maybe a total of five to six trips back and forth into the recesses of the restaurant, all the while completely ignoring the two of us and awkwardly trying not to make eye contact, she finally acknowledged us. She said matter of factly “I can sit you at the bar or out here” without even a hint of a welcoming smile. Gesturing at the room full of empty tables in the fairly austere exterior of the restaurant, she then says one word — “Wherever.” At this point we’ve been standing there maybe 10-15 minutes. The lack of welcome or polite acknowledgment on her part was beyond rude, it was ridiculous. She was so lackluster and devoid of welcome it was somewhat repellant. So not cool. 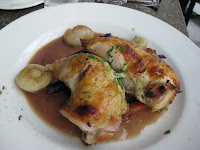 When I got up to use the restroom not five minutes later, I could not help but notice that there were empty tables everywhere. At least six empty four-tops and two empty two-tops. It was 12:20. I doubt the whole place was booked for one o’clock, but I suppose it is possible. It just had this air of regulars inside, non-regulars in the crappy seats. Either way, we clearly didn’t matter. Perhaps it is their policy not to seat you inside if you don’t have a reservation. Oddly enough, she never asked. It was really, really off-putting.

We were hungry and the waitress was really sweet, so I tried to kick the bad mood the hostess had given me. We each ordered one of their fresh lemonades. I had a fresh-squeezed Limeade, which sadly enough, was the high point of my meal. The crispiness of the drink was like nice little giggle on my tongue; my BH had the Raspberry Lemonade, which was likewise yummy, sweeter, but still remarkably light. As I recall, their drinks are fresh limes or lemons and a bit of simple syrup, which blends better than crystallized sugar does. They have always done this particular refreshment very, very well. The busboy soon brought us a plate of bread, which at Verbena is baked on premises. It’s a bit like focaccia, only a bit breadier, with lovely carmelized onions grilled onto the surface. Today the bread was stale. Maybe only a day-old or so, and it was still pretty tasty, but hey, who serves stale bread these days? 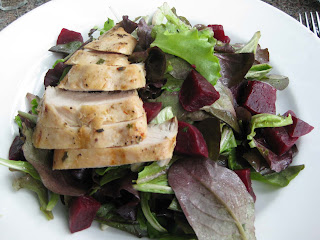 The BH and I then shared a Crab and Artichoke Brandade. (A “brandade,” for those of you who have not heard the term before is a French dish — traditionally a puree of salt cod, olive oil and milk). This take on it arrived in a smallish ramekin with some toast. The only thing I could really taste was cheese. It was okay. The artichoke in the dish was not an evident flavor, the onions in the dish were raw chunks with no carmelization; in my mind this dish was sloppy. The crab meat was also not particularly evident. The whole thing seemed like an afterthought. Again something missing. A dish with no heart.

We were sitting there, in this chilly, gray atrium, looking at the rain and hoping for an improvement in the mains. The atrium is enclosed with glass and it was grey and bleak outside. So as I sit there and freeze, another dish arrived. We received our bowls of the Seafood Stew which was the soup of the day. It was just okay. Nice blend of tomato and basil, and the seafood wasn’t too overcooked or chewy, but all I can think to say is what wasn’t really wrong with it, not what was right.

I’m waiting for my main, in the hopes of at least finishing the meal with a yummy beet salad. My Salad of Chioggia Beets and Baby Lettuce with Chicken arrived barely dressed. Quite literally they served me a pile of lettuce with no detectable dressing and two or three beet chunks thrown on. The only thing that didn’t taste like cardboard was the sliced breast of chicken laid across the top of my salad. It was flavorful and moist, but at that point I’m kinda pissed off. And it was one of those experiences where when the waitress came to see how things were, I said "okay," because really, what could she do about the “we clearly don’t give a shit” attitude of management? When that much is missing, the people at the top have to know, and they have to not care.

The only close to worthwhile dish was my husband’s beautiful Herb-roasted Half Chicken. Moist, flavorful and delicious, it was an echo of the way the food used to be here, once upon a long time ago. I was also introduced to my first ‘rainbow carrot’ as one of my husband’s sides. You can see in the photo that they are dark purple. They taste a bit like a carrot mixed with anise, and this one also had the flavor of the smoke from their wood-burning ovens.

So this experience might be the polar opposite of eating simple cheese and bread in the hills above Genoa with relatives I never met before and haven't seen since.  For me eating is about invoking simple pleasures and savoring life.  There was no shadow of this aesthetic at Caffe Verbena.

Overall, the meal was stunningly mediocre. The single dish of well-prepared chicken could not redeem an almost entirely bad experience. While this place does have a good location — in the lobby of a very sleek and well-populated business high-rise in downtown Oakland — clearly they are skating by on that location alone. Perhaps they feel if they have a captive audience, why put in any effort? I suppose if you’re there in that building, and you have to eat, you can find something on Verbena’s menu that doesn’t suck, like the chicken, but the food here is profoundly lifeless. I don’t like pointing this out, but these days in Oakland, with all the well-thought out menus, well-prepared meals and loads o’ love offered by the competition, a person has to think I can do better. Especially at those prices.

Footnote: Our waitress, a lovely charming red-head, was delightful. She made several appearances to check on us, brought us fresh lemonade/lemon drinks, offered us dessert on time. She couldn’t have been more efficient or attentive. So no fault of hers.
Posted by The Food Apprecianado

Email ThisBlogThis!Share to TwitterShare to FacebookShare to Pinterest
Labels: Oakland