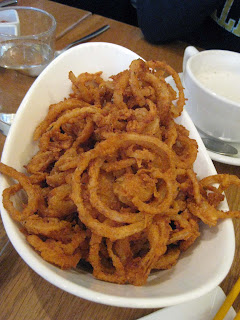 Deep into Berkeley, running perpendicular to the waterway that forms the edge of the Estuary between Berkeley and the Bay, is where one will find Grayson Street. From the time I was old enough to swim I spent almost every Wednesday of every summer at the Sacramento River Delta, boating and waterskiing with my father. When I was fifteen, he began to bring along a young student of his, who also happened to be an apprentice pizza-maker. The student, whose name was Carl, worked for my uncle Frank at his pizzeria. After these long days on the water, we would spend many a night at Ninth & Grayson, concluding our day of recreation with pizzas and drinks at my Uncle Frank’s Pizzeria. It was called Granata’s. 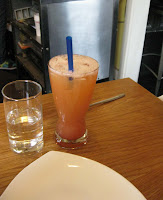 As we drove to check out 900 Grayson — the scenery becoming more and more familiar — it was these old memories that were flooding my consciousness. They flew through my head as though the streets themselves were rushing me back in time, back to Granata’s and scenes of my youth.  I suddenly remembered vividly the glass-encased viewing window between the bar and the restaurant where Carl and Uncle Frank would show off their dough-tossing skills for me and my little sister; the big circular leather booth in the corner of the bar where my father held court with my sister and I, yelling “Hey Paisan” at passing Italian brethren; the crunch of the crust and the flavor of lovely green peppers and mushrooms melted into hot, gooey cheese. Being out with my father was an amazing feeling for a kid. Eating at Granata’s always felt like home. Mostly because it was.
It was with these overwhelming feelings of nostalgia swirling around in my brain, that I arrived at 900 Grayson. Unlike Granata’s it was certainly not a pizzeria, nor did it possess an oppressively dark interior and sixties-evoking red leather booths. Instead the restaurant that is 900 Grayson was a lovely little unassuming structure, like a tiny gingerbread house, sitting on the corner of Seventh and Grayson Streets in Berkeley. The interior was also light, airy, very Berkeley, with loads of clean simple wood and a very casual, but well thought out design scheme. It looked like we’d stepped right into grandma’s kitchen. Or a homey fifties diner, absent much of the chrome and with more bleached wooden tables. Either way, I was hungry and ready to make new memories with food. 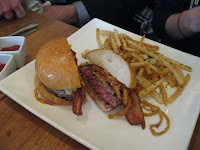 The place is very, very small. So if you are going in for lunch, get there early or be prepared to wait. If you’ve got the time, it’s worth the journey. The fare is simple, fresh and well prepared.


I began by ordering a Chai latte, non fat. It was cold and I was in need of some warming up. They brought this lovely big homey cup of tea, with that wonderful cinnamon-laced taste of Chai and oodles of foam. It was perfect. 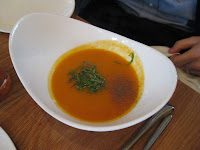 One of us ordered a cocktail, the Tequila Aquatic Sunburst (ironically named after the water, which is where my mind was). They do not have a full liquor license, so this drink is made with a grape based tequila. I couldn’t tell the difference, it had an agave taste to it. I found the cocktail really fresh and I loved the citrus tang.
Before they brought our mains we ordered some Shoestring Onions as an app of sorts. They were something delectable. Thin, perfectly fried, crunchy with a well-cooked onion in the center of the batter that was melty goodness. Sometimes the onions in fried onion rings can be stringy, and if not cooked well enough, they’re tough. This can make a filling that is out of sync with the fried outer shells, so they can’t really be eaten as one tasty bite. This was not the case here. These fried onion strings were out of this world. They had a nice Sri Racha dipping aioli along side them that was likewise delicious.

The grad student had the Stone Soup, (a clever little touch, from the book of the same name, which at 900 Grayson means soup that changes daily). Today it was squash. She found it to her liking, not too sweet, the savory seasonings melting into the sweetness of the pureed squash.

I ordered a Lady Boy Salad, with Prawns. It was a lovely fresh concoction of Lemongrass-Kaffir Lime Prawns, Mango, Daikon, Carrots, English Cucumber & Rice Noodles Fresh Basil & Mint, Sambal Vinaigrette Dressing, Toasted Rice Powder, Micro Tatsoi Greens. The colors all blended on the plate to give a sense of attractive lightness to the dish. The mango and citrus-tart leafy greens all went well together, and the dressing on the prawns had a nice Asian flair to it. Tasty 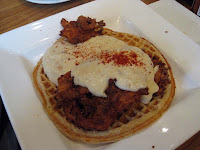 The grad student and our PFC shared the Pulled Pork and the Burger, which they ordered rare. The pork was good, but they felt it might have been stewed rather than smoked. Not a huge deal, but smoked does give it a more robust flavor, forcing more seasoning down into the meat itself.

The Burger was rare, having been cooked correctly. The bacon on the burger was chewy and rendered properly, the entire affair had plenty of cheese melted all over it. They enjoyed both.

The piece de resistance at this place is a dish called the Demon Lover, which is essentially fried chicken & waffles. One is given a choice of sweet syrup or a thick country gravy. The BH is a savory meat kinda guy, so he went with the gravy.

The food here is fresh. Can’t use the word enough, because it’s obviously an emphasis of the management. The food sources are purchased locally, and everything, or almost everything here, will gladly be rendered vegan or vegetarian upon request. Many dishes have versions that will easily accommodate the vegan/vegetarian appetite already listed on the menu.

It’s a nice place. Cozy. Welcoming. Intimate. A lovely little diner for the new age of food. Check it out for yourself. Bon Appetit!

Dining time: except for any wait, service was plenty swift
Noise Level: TWO BELLS - Can talk easily
Posted by The Food Apprecianado