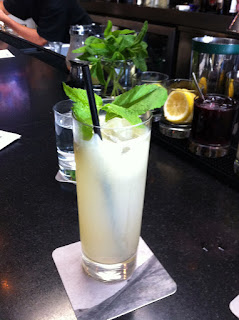 Before I get to telling y’all about my ecstatic food adventures in New Orleans, I need to tell you a little something about my experience the night before last at Hudson, the former Garibaldi’s slash Marzano on College Avenue in Oakland. Wednesday night the BH and I had tickets to Buffalo Springfield, so we made reservations for a quick dinner in town before heading over to the show. We’d heard great things about Hudson, in fact, after we made our reservations, we heard from a “foodie” friend that it was one of his new favorites. He’s fussy, so we were really looking forward to the meal.

We arrived early for our 5:30 reservations, and were seated promptly at the bar to wait for the dining room to open. The BH was feeling poorly, so asked the barkeep what they could whip up in the way of alcohol free libations. The delightful young man in the well produced a concoction of pear, lemonade and fizz that was the perfect ticket for a queasy tummy. I was perusing the cocktail menu, which is laid out in order of “manliness.” Ya got your chick drinks or “Soprano” your middle of the road “tenor” selections and the real “Manly Man selections” titled simply “Bass.”

﻿﻿Being the Italian son-that-never-was that I am, I ordered from the "Tenor" menu, though there were a few on the “Bass” list that caught my eye as well. I was feeling like Tequila, since it was a work night and the clear libations seem to set the best with me the morning after. But, at the recommendation of the bartender, I went with their “My Dear Watson” an intriguing mix of bourbon, egg white, lemon, orange, maple syrup, bitters. The drink is also served with a lovely black cherry in the depths of the martini glass. It was absolutely delicious, and since he made it in front of me, I could tell it was made with a great deal of attention to the little details. I must say I am newly a fan of cocktails shaken with a hint of egg white, as it gives the drink an almost milkshake-like consistency without being the slightest bit heavy. I am not a fan of the dessert drink in general.
﻿
﻿Sitting at the bar was like being at a happening. Maybe it was being on my way to a show that put me in my happy place, but I think it would be unfair to credit only the show.  I was really lightened by the interaction between the bar staff and the crowd.  It was quite like being physically lifted up and set back down in a better place. The bartenders were cheerfully greeting regulars, with a demeanor so warm and inclusive it made the BH and I feel as though we too were part of the communal fun, a hard thing to do with so many ages and types at the bar.  There was genuine merriment as one of the bartenders gave a waitress who was having a difficult time with opening his shaker a good natured ribbing.  The experience was just such a delightful introduction to the place and left us both a bit warm and fuzzy all around.  *the BH wasn't imbibing, so I know it wasn't the booze alone.

Promptly at 5:30, the hostess came to seat us for our reservation, ushering us to a lovely table by the front window. She was, like the bar staff, extremely welcoming and engaging. That means something in this competitive business, at least to me.  Bad service can come in many forms, and I rarely comment on a server who falls short because I really can't know what sort of day they are having and it's such a difficult job.  But when they are so completely on their game it's worth mentioning.

Once seated, I wasted no time checking out the menu. I was starving and there were plenty of enticing options for the hungry. Knowing that with the BH slightly out of commission I was going to have to finish the bulk of the meal by myself, I decided not to order my usual, well, almost everything. Given how many amazing choices they had, that was a tough position to be in, but a good one.  Next time I'm going to indulge in the rabbit pasta.

BH began with a lovely spring soup, and though I didn’t taste it in order to avoid catching whatever bug he might have had, he says it was really good in spite of his iffy appetite. It definitely smelled wonderful.  For myself, I ordered a starter of pork belly, and for a main we shared the plainest pizza they make, which was a mix of fresh mozarella, basil and tomato. It was simply bliss, but before I get distracted rhapsodizing about the pizza, I should mention the pork belly. 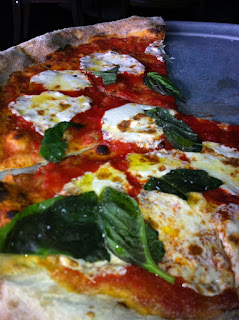 It was an amazingly well prepared piece of this particular fatty meat. The exterior was perfectly chewy, with a great toothsome resistance to offset the soft fatty insides that melted with each bite. The pork was on a bed of pureed deliciousness, with spring peas sprinkled in the mix. I was distracted so I didn’t write down the list of the Chef’s trimmings, but my tastebuds are indelibly linked to the flavors. The dish was absolute perfection.
But back to the pizza. It was outstanding.  Memorable in its simplicity, with every mouthful a delight. I can't describe flavors so fresh they jump right off the dough, but they were present in abundance.  The light fresh garden taste of tomato, the perfect fruit.  The herbs blending with the house made cheese combining to please every sense.  It looked beautiful, smelled like fresh herbs, the crunch of each bite was a pleasant combination of sounds and the taste and texture were lovely. There is another place in Oakland, on Piedmont Avenue, that does pizza this well and in this style. Thin crust baked just right in a wood oven until the crust is almost cracker crunchy but retains the moisture well enough to resist falling completely apart at first bite. The toppings were subtle and tasty. We both thought it was as good as any we’d had elsewhere, maybe better.

The BH and I were thrilled to have discovered that after closing briefly and changing its interior and its name, Hudson has truly reinvented itself.  The interior is once again a lovely open space, with the wood burning oven the focus of a clean and yet invitingly modern layout.  I must confess I found the former Garibaldi's/Marzano combination a bit confused, it seemed neither side was committed to a style and the coming together didn't work.  It was good, but not great.  Now it's better than great.

The food is stellar and the service was welcoming without being effusive. If it seems I am waxing on about the service, it is in part due to an entertaining incident that took place at the table next to us. Shortly after we were seated, a woman was placed at the table just across from us, and we thus shared the same waiter.  He had quite efficiently placed our order, and so went to ask the solo dinerr what she was having. After a fifteen minute speech about the menu, it was clear she was going to be difficult. At one point, after our waiter brought her a glass of champagne she had ordered, she asked him if it was “opened tonight.” He replied cordially that it was. She drank over half the glass, but as soon as he returned she motioned him over to tell him her champagne was flat. Then she continued to educate him about the failings of the champagne, champagne in general, and all the ways he could and indeed must, be ignorant of the many things she herself knew about champagne. This diatribe was conducted in a VERY loud voice.  I was thankful I was not any closer to her table.

I have to say, sometimes I marvel at waiters who when presented with a thoroughly distasteful patron, one I imagine they sincerely want to throttle into unconsciousness, respond with a cool aplomb that seems boundless. I could never ever do that job. My hat’s off to Jeff.

And the food is mind-bending! Stop by and check it out for yourself. Bon Appetit!