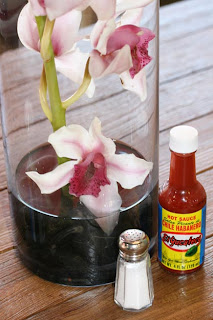 I wouldn’t have thought that with everything else happening in Oaktown I could get this excited about something new.  But I am, and you know what?  You should be too.

When I began this little adventure in food writing, I was excited about the advent of good eats in Oakland.  Back then it seemed restaurants were opening everywhere.  Uptown, Telegraph, Temescal, Downtown, Jack London.  My city was suddenly alive with upscale eateries, one after another and they came in waves.  Soon even the star chefs from SF were in on the game.  Then there were the trucks.  So many trucks, here, there... everywhere.

Now I’m pretty sure there’s a new phenomenon taking over the streets of Oakland.  There are suddenly springing up venues that resemble what I would call street food “Cafe(s).”  Wonderful land-locked editions of the fabulous floating food on wheels.  The are populated by Chefs who have found enough support to open a store front to bring us their Chef love.  The newest version of this delightful and affordable phenom is Cosecha, helmed by the gifted Chef, Dominica Rice.  Cosecha is in it’s infancy, only about two weeks old today when I paid it my first visit.  But for such a youngun’ she’s already hit her stride.

Cosecha serves a very simple menu; a blend of classic Mexican flavors, all executed with fresh local ingredients in a fresh and inviting way.  On arrival at about 11:30, the place was fairly empty and we had a little trouble finding the address.  Though officially located at 907 Washington Street, the door isn’t obvious, and the converted open market area of the former Swan’s meat market around the corner on Ninth Street is ultimately easier to find.  We literally wandered in and hopped up to the counter, starving.

After a quick review of the menu (one orders at the cash register and takes a number to one of the communal tables), we decided on the Pozole soup, and one of each of the soft tacos. Along with lunch we each ordered a glass of the Strawberry Lime Agua Fresca.

The food arrived swiftly, along with the rest of the population of Oakland.  By the time we’d cut into our first taco to split it, there was a significant line forming. Good sign.  We ignored those who’d come after for the time being anyway, and sampled the first treat brought us, which was a platter containing one each of their lovely tacos.  First up was the Taco de Carne Asada with Salsa Ranchera.  The meat was moist and so full of flavor that I was blown away.  There is not sufficient description for how simply, perfectly fulfilling this food is.  My next mouthful was of the Taco de Pollo Asada with Achiote and it too, was da bomb.  Tender seasoned chicken meat with this fabulous bit of grilled pepper just melting into each bite.   The last taco, which was a Taco with Beckerlane Braised Pork & Pickled Red Onion.  Another hit.  The house made tortillas are buttery soft and the seasonings just waft across the palate like love songs on a summer night.

About halfway through the tacos, our Pozole arrived.  The flavorful broth was chock full of fresh chicken and hominy.  The platter of garnishes was not unlike the platter of jalapenos and bean sprouts that accompany a classic Pho.  Except of course it was a quite different selection.  Radishes, onion, seasonings & fresh slices of jalapeno.  It was at this point that I realized I wanted some of those jalapenos in my soup, and that ordering only one bowl had been an error on my part.  The waitress was patient with me and brought an extra bowl as soon as she got a moment (at this point the line was forming out the doorway and there were no seats at any of the tables).  I knew my husband would not like the heat; but frankly, I think that the Pozole with the added jalapeno was just about the most bestest soup I’ve ever tasted.  Really, really flavorful.  Not to be terribly cliche but it was so obviously a bowl full of love.

And I’m so enraptured with the food here, I've forgotten to mention the Strawberry Lime Agua Fresca --- easily the best version of this drink I’ve ever tasted.  Hands down.  I was first introduced to this lighter than juice juice at another mexican restaurant in the downtown area.  Theirs is lovely.  This is better.  It’s surprisingly complex.  There is something other than just fresh strawberry and lime, I swear.  Maybe a little magic.  Who knows?

As I let the BH finish the better portion of the hearty (but not heavy) bowl of soup, I felt like treating myself to a tiny sampling of something sweet.  So, I got back in the line, which was still quite long at this point.  I waited patiently.  Tapping.  Anxious.  What if they ran out of those lovely cookies?  They didn’t of course.  I got to the front and looked longingly at the line of sugary treats.  Bisquits with some sort of lovely plum jam, Mexican wedding cookies they were calling “Lime Meltaways” and soft fresh Chocolate Chip Cookies.  Then I saw the flan.  The cashier said it was a “Citrus Flan” and that was all I needed to hear.  I ordered a Lime Meltaway and a Chocolate Chip Cookie for the BH and the Citrus Flan for myself.   I took my number and headed back to my table to anticipate the wonder.

I was not disappointed.  Both cookies were perfection, the Meltaway did exactly that, the Chocolate Chip was soft and chewy and toothsome.  But the Flan was just amazing.  Often I hear people say they like the flavor of flan, but “not the consistency.”  Some people just don’t like the bite of an egg custard.  This was something entirely new.  If I can compare it to anything, it would be a molten chocolate lava cake.  The outer "shell" of the flan was firmer, and the inside was this yolk-like pudding that flowed out and onto the fork.  Just firm enough to stay put, but softer and creamier than any version of flan I’ve ever tasted.  The addition of citrus a brilliant touch --- kept it from being cloying.  The puddle of caramel it sat in was also perfection.

I can state with certainty that Chef Dominica Rice’s baby will be successful.  Her food is heartfelt and fulfilling, and her prices are so reasonable we got out of there for under $30 including tip.  And we ate like fools.  So I say... Check it out.  Make a memory of your own.  My advice?  Get there early.

Noise: boisterous, could be hard to hear from time to time
Table size: adequate communal tables
Service: friendly and efficient, but still have some bugs to work out
Cost: Affordable for even the most modest of budgets
Posted by The Food Apprecianado