OAKLAND’S STAR TURN AS CINDERELLA AT THE (MONEY)BALL 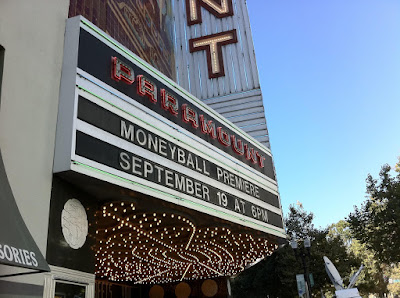 I’ve spent my whole life apologizing for my hometown.  My fifth-grade bestie, a transplant from the City of Angels, once told me to simply tell people I was from “Frisco,” because no one knows where Oakland is, and those who do think it’s a ghetto.  Out of the mouths of babes.

Don’t get me wrong.  I was never ashamed of my city, despite her “little sister” status to her famous counterpart across the Bay.  Oakland has always been beautiful in my eyes.  That doesn’t mean that she wasn’t difficult to introduce to others.  Like the witty girlfriend whose great personality one tries to sell to a potential blind date, Oakland was a wallflower who needed to be experienced firsthand to be appreciated.  One could spend a lot of time trying to get her invited to parties.

For as long as memory serves, Oakland has struggled with various mis-perceptions, each holding just enough truth to stick.  I often hear that she’s all urban blight — a virtual black hole of decay.  While there are places in any city that need to be redeveloped, Oakland is by and large a beautiful place.  At her center is Lake Merritt, a lovely free-form crescent of greenish-blue water that is the beating heart of a National wildlife refuge.  The lake is surrounded by the “necklace of lights”  --- a string of refurbished turn-of-the-century lamp posts that glow after dark like gems the throat of a queen.  Oakland’s reputation is that she is a dangerous city, a place that is unsafe to visit.  While there are certainly neighborhoods that should not be traveled by those unfamiliar with them, most of Oakland is as safe as any other modern urban location.  New Orleans, Manhattan, all have their attractions and their challenges.  I can truthfully say in my decades of exploring Oakland, I have never felt any more threatened at night while traversing her streets, than I have in say, San Francisco.  Not once.

One of the main reasons I began writing this blog was to share with the world the changing landscape that Oakland is currently experiencing, and there’s been a lot of that change in the past few years.  As real estate became more expensive in San Francisco in recent boom times, many of those businesses moved into Oakland.  With those people came a few nice restaurants.  And so it began.

As season-ticket holders for another of Oakland’s best features, the Oakland Athletics, the BH and I were offered an opportunity to purchase tickets to the world premiere of Bennett Miller’s Moneyball, starring Brad Pitt and Jonah Hill.  The event was scheduled to take place at the Paramount Theater (another Oakland gem) followed by an after party at the recently restored Fox Theater in Uptown.  The chance to attend such an event was an offer too good to refuse.  How often does one get the opportunity to attend the world premiere of a Hollywood film? What could better serve Oakland than a full scale industry event?  I had to be there.  We took them up on their offer and scored seats in the rear orchestra for the big night.

When we arrived I was thrilled to see the mini baseball stadium they’d recreated in the parking lot adjacent to the Paramount, a full-on Hollywood style red carpet.  We went over to will call and waited for the theater to open.  When it did, we were promptly escorted in, and the air-conditioning was a delightful relief from the unusually warm September weather outside.  Rows of lovely complimentary cocktails were displayed for the guests.  One a notable bright green appletini that had a lovely yellow apple floating in it (a nod to the A’s team colors); the other a nice soft pink tequila number.  I chose the latter because, well, the chance of spilling the green on a fancy dress in a crowded room was too high . . .  I’m sure you ladies will feel me.  The drinks were delicious.  I had several.  Once we were sufficiently lubricated, we proceeded to mingle.

Though the biggest celebrities were sequestered down in the green room, we roamed the crowded halls of the Paramount playing a game of identifying various minor celebs, chatting with other fans, many of whom we knew from our many years at the Coliseum.  Oakland’s own version of the glitterati were out in force.  Various members of the A’s: announcers and players past and present.  Mayor Quan.  A’s team photographer Michael Zagaris.  Even local hero Sully Sullenberger was in attendance.  Definitely a happening.

There were a good number of A’s season-ticket holders in attendance, many in full sports regalia.  They had come to cheer on our beloved rag-tag team.  I’ve followed baseball since the early 80's.  It was the thing my father and I rallied around, a common ground as he was dying of cancer.  We went together to a game during the ‘89 World Series.  Good stuff, baseball.  My dad used to say “It’s a thinking man’s game.”  Having played shortstop as a youngster, his love of baseball had even more history than my own.  And that’s the beauty of the game. It can pull us in at a young age and hold us for life.  It can be the backdrop for family events, uniting young and old in a communal enthusiasm.  Much like eating a meal, baseball is a pastime that is meant to be shared, to be experienced together.  It has heart.  Perhaps that is why it is America’s game.

The premiere underscored this universal truth in many ways, but one of the most enjoyable instances was when the crowd would spontaneously burst into the “Oakland A’s chant” at various points throughout the evening.  “Let’s Go Oakland” came the voices, followed by the familiar rhythmic clap.  It was invigorating.  Aside from an event which so beautifully celebrated Oakland, we were all thrilled at the tribute this movie was paying to baseball and our beloved A’s.

Soon we were seated, and the main event was about to begin.  The director was introduced, and after a few words on the making of the film, he introduced the films producers Rachel Horovitz and Michael DeLuca; the screenwriters, Aaron Sorkin and Steven Zaillain; and the author of the book Moneyball, Michael Lewis.  Then out came the stars, and they were blinding.  The delightful and talented Kerris Dorsey (Beane’s daughter in the film); Chris Pratt (Scott Hatteberg); Phillip Seymour Hoffman (Art Howe); a slim and almost unrecognizable Jonah Hill (Hill plays a fictional character Peter Brand, a conglomerate of the computer geniuses who came up with the Moneyball concept, based primarily on the real-life Paul DePodesta) and then... Bennet began introduction that rapidly turned into “Oh you know who he is... BRAD PITT” ::insert roar of crowd here::  They thanked us for coming.  The lights began to dim.

As the lights went down, the fans in the back began to chant again. “Let’s Go Oakland, Let's Go Oakland” followed by the drumbeat clap clap clap clap clap and as they were descending the stairs,  Brad Pitt, Aaron Sorkin and Phillip Seymour Hoffman all paused and spontaneously joined in, essentially leading it for several moments.  Golden.  Oakland couldn’t have planned a moment like that in a million years.  Enthusiasm so infectious that even the larger-than-life Hollywood types could not resist it.  The wallflower had been asked to dance.  By the Prince, no less.  I will never forget it.  In those few minutes, it was hard not to be romantic about Hollywood. 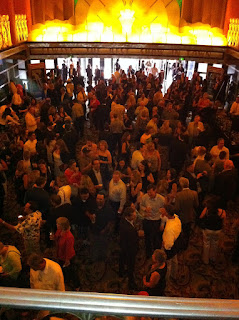 From the moment the lights went out, I was on the edge of my seat.  Perfectly paced, engrossing film, the backdrop in every scene authentically familiar.  I’ve been going to games at the Coliseum since it was built. Pitt is a brilliant Beane, engaging, reflective, and madly in love with the game.  Jonah Hill was funny and introspective, in a perfectly natural way that spoke volumes.  The rest of the cast is brilliant, the running jokes funny.  The East Bay’s own Stephen Bishop does a turn as David Justice that is believable and entertaining. Inspired.

If the audience was any kind of a focus group, they have a huge hit on their hands.  Being at a premiere is a unique experience as, aside from the glitz, it turns the two-dimensional experience of a film into live theater.  The performers are there.  They can hear your applause, your laughter, or your disapproval.  They get the real-time feedback of a Broadway show, which is of course, one of the reasons they hold premieres.  It adds an incredible layer of suspense as the audience becomes a vital part of the show.  It was a once-in-a-lifetime opportunity and one I will not soon forget.  I won’t spoil the movie with details about the plot.  Suffice it to say that it’s a compelling story, and they tell it perfectly.  If you love baseball, it’s a must see.  If you love Oakland, same deal.

As we left the theater, we remarked on the only theme other than baseball that had permeated the evening.  “This is so good for Oakland.”  In the theater and outside, everyone was high on the City-that-couldn’t-get-a-prom-date’s evening as Cinderella at the ball.  Great stuff.
Now if we could just land a Westfield-style Mall smack in the heart of downtown.

As we walked to dinner at Picán (obligatory food reference), my husband remarked on how perfect the timing was. He reminded me that even ten years ago, there was not much “there there.”  Everyone leaving now had the opportunity to walk to a world-class restaurant to experience a first class meal.  Our choice was Picán, but Luka’s, Plum, Flora, Ozumo, Nex, Tamarindo, Hawker Fare and Hibiscus are all within a few blocks, are all first-class and represent a variety of settings and price-ranges.  It was a big happy block party, to which everyone was invited.  It was evident that no one felt threatened on the streets that night.  We could all have been strolling through a boisterous post-theater crowd in Manhattan.  Oakland’s glittering coach had pulled up and we were all invited aboard.  It was hard not to be romantic about Oakland.

Bottom line.  Moneyball.  Check it out.  Make a memory of your own, and while you’re at it, check out the real thing.  Go see an A’s game come spring.  This could be the year.  It’s hard not to be romantic about baseball.
Posted by The Food Apprecianado

Email ThisBlogThis!Share to TwitterShare to FacebookShare to Pinterest
Labels: Oakland