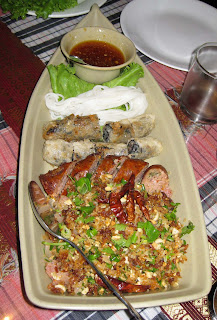 I've been running the gamut of my personal favorites in town so that there will be a record of these places in case I'm hit by a bus. I wouldn't want them to go out of business just because I've gone to the Great Restaurant in the Sky, although something tells me my BH would find a way to get on with his life, probably by eating his way straight to my side, so perhaps I worry for no reason. Nevertheless, I'm making a record just in case.

The next gem on my list is an inexpensive and well-hidden little Laotian Restaurant (officially it calls itself a mix of Laotian, Thai and Vietnamese) tucked into the middle of nowhere off Park Boulevard in Oakland. It's name is Champa Garden. Ok, th 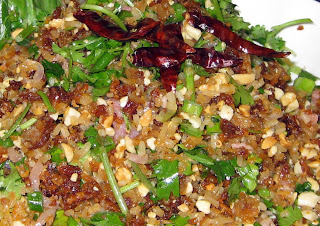 ere, I said it. Out Loud. Now try and find it! It's harder than finding the entrance to Shangri-La!

However, if you are successful in your quest, and you actually find and enter the tiny, unnassuming one story structure on the corner of 8th and E. 21st, I will tell you what to order. If you know what to order in advance, one can have the meal of a lifetime here for relatively little money. We brought along our partner in food crimes, a young associate who has excellent taste in food, and loves spice (his companionship opens up a world of possibilities for me, since BH does not do the 'spicy' at all), so we were able to order a lot of items on the menu. From here on, he shall be known as PFC.

Start with the Rice Ball Salad (pictured above) which is described on the menu as crispy fried rice, preserved pork and lime juice. It has to have something else in it, like chopped up wonderful, or a dash of fantastic. This stuff is memorable. It is this indescribably combination of cruncy goodness that is intended to be spread onto a lettuce leaf and (with the addition of a bit of mint) rolled into a cigar-like concoction and chowed down on. I like to crumble a dried red pepper over it and wrap up the hot, spicy bits with the rest. Warning: Don't try this at home! Seriously, if you like crumbled red peppers, I suggest you wash your hands immediately after crumbling them and don't say, rub your eyes. Not good. 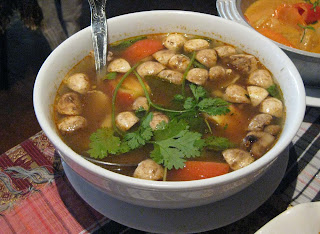 Rice Ball Salad is so yummy it has to be bad for you. Perhaps the fried rice part was what tipped me off. If I die early from eating this stuff, it will have been a life well worth living. My two accomplices and I were all so desperate for a taste of rice ball salad, that we ordered the trio of appetizers because it contained an extra serving.

This trio of appetizers/"sampler" (contains Lao Sausages, Fried Spring Rolls and Nam Khao, or rice ball salad). I tried the Spring Rolls first. I found them flavorful, but a little greasy. Just okay. They were a bit better when dipped in the sauce that was served with them, which was really good. A well balanced version of the tangy, peanut-ty sauces typical of cuisine from this part of Asia. This appetizer sampler also contained a sampling of one of the pork sausage that Champa Garden is well-known for. We had not tried it before. For me sausage is really hit and miss, but I liked these. They did not overwhelm me, but the meat was a good consistency and the spices chosen to flavor the filler were solidly balanced. Nothing was fighting with anything else. I'd give them 3 tastebuds out of 5.

We moved on from the apps (stuffed from over-eating the rice ball salad) to a course of soup. Today's choice was the Tom Yum (I think). Word of warning. Ordering soup here is for some reason quite tricky. Previously we had ordered several of the choices on their soup menu, without ever actually getting the right soup. At first we just thought we might have ordered wrong, but it soon became clear that we were just getting something else entirely. For this reason, and the fact that we weren't overly fond of the soups we had sampled here, we stopped ordering soup. The last time we were in, we ordered the tom yum in the hopes that we might finally get it. We emphasized the pronunciation and repeated the order and surprise! We got a tom yum! This is a Thai hot and sour soup. It is far milder and not at all viscous like the more familiar sweet and sour soup one might find on a traditional Cantonese menu. I believe the hot is black pepper and the sour is a broth of stock and vinegar. The Thai use raw mushrooms in their soup and allow them to cook in the hot broth. The result is a slightly crunchy mushroom that is hot on the outside and sometimes still cool on the inside. I wonder if this practice came about because someone realized the soup was too hot so they cooled it with "ice" mushroom caps. However it came about, I am a fan. Soups are not their strong suit here, but this is a good one. I am not fond of the other soups on the menu. At all. So no soup --- or this soup --- is my advice. 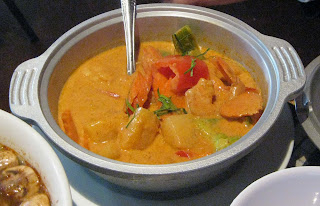 Lastly, we needed something to wash down our sticky rice. We chose a standby: the Pineapple Shrimp Clay Pot. It is a sweet, red curry dish that is chock full of pineapple, shrimp and flavored with coconut milk. The sauce is a thick wonderful consistency, almost a gravy, that goes really well over sticky rice.

We also ordered a new dish to try. Champa Garden had a fried catfish special on the menu the very first time there that I loved. (My BH thought it too hot to try and our associate didn't like it much at all. But I loved it.) So in the hopes that this dish was finally on the menu, I ordered the Pad Ped Pla Dook (I know, right?), which is apparently Laotian or Thai for "hunks of fried catfish in some yummy peppery goo" -- the menu says it is "catfish battered and fried in Thai basil curry sauce." I love nothing better than a Thai basil curry sauce do 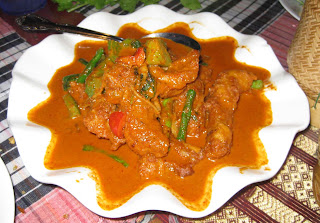 ne correctly. This sauce was pretty good, although not exactly as I remembered. It had the classic combination of basil and sweet curry that they do so well, as well as a coconut base very similar to the pineapple chicken. Might be a little too similar, not sure. It was hotter, with a fairly peppery (black, not red) after-heat to it. I liked it but I can't say I loved it so much I would have to try it again. Catfish gets soggy fast, so it doesn't really keep as a leftover and it's a lot to eat with the other dishes.

We have not tried any of their desserts. Perhaps some day I will do an entire column of desserts missed at various restaurants. But not today.
So, like I said. Try and find it. If you do, you'll not be sorry. And you have to order the rice ball salad.

Dining Time: without travel (not near anything) easily done in an hour.

Table Size: Cramped - adequate (each table has a very large condiment tray, that uses up almost half the dining space)