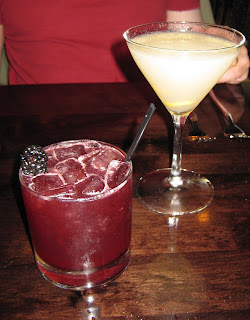 So, this place has been the location for several restaurants I have enjoyed over the past ten plus years, including the Old Ratto's annex where sandwiches and spaghetti were served to piano music on Wednesdays. The ghosts of the old deli are visible nowhere, as the high ceilings and swanky decor have all but obliterated the antique sensibilities of a turn of the century delicatessen. Since being home to Ratto's, it became a restaurant I much liked, by the name of LMNO. Then it became a joint called "Rex" and lastly "Levende East." Levende West, located in SF has recently closed -- I can only assume it has fallen victim to the recession, like so many other establishments have recently.


Levende East is a really attractive space, open and with the high ceilings previously mentioned covered in large eye-catching artwork. The furniture is black, and the upholstery dark. It gives off an urban swank vibe that I rather like. The food here is good, although portions have been an issue of occasion. Their cheese plate was originally so stingy on the servings that I made a bit of a noise about it, which I rarely do. It was as though someone had accidentally left cheese shavings on an empty plate. I do believe they've addressed that issue at this point however.

My BH and I eat here frequently, although a bit less so since Oakland has opened so many new and inviting places to choose from at which to dine of a weekday. With so many options, it's hard to know which to pick for lunch! Friday it was Levende's turn, and we decided to return and sample whatever was current on the menu these days. 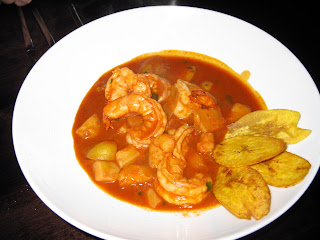 To our delight they had several new drinks on the menu, and since it was Friday, it seemed fitting to order one. I had something entitled the "Popcorn Shower" which apparently has nothing at all to do with popcorn. The name apparently comes from a story the bartender heard about a custom somewhere that entails giving people popcorn showers to make them laugh, or to cause them to be happy. He thought his new concoction delightful and thus the name. Attentuated, but amusing

enough. The drink itself was delicious, a refreshing blend of blackberry and citrus that I found enjoyable. My husband had a cocktail called the "Hemingway" (so many cocktails are named after Papa H these days) and it was very lemony. A bit dry, not overly sweet, but generally refreshing.

For our main course (no apps today) I chose the grilled cheese with tomato soup, and my husband had a cup of the tomato soup with a dish described as "Yucatan-style Prawns in Achiote Broth." Neither of us has a clue as to what achiote broth may be, but the prawns were really good. I found the sauce had a peppery tomato quality, and though 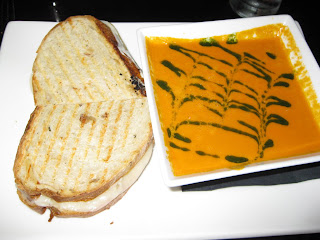 it was peppery, he did not find it too hot to consume.

I thought my tomato soup was perfection. I have to say I really really love the soups here. They are almost as good as Franklin Square at perfecting the liquid food format. The accompanying grilled cheese has morphed from my last visit, when it was a trendy, fancy-plated mini-sandwich in four tiny pieces, to what it is now --- a large sourdough encrusted, full-on manwich. It was good, but I could only eat half of it. I think I missed the tiny bite-wiches that one could dip daintily into the soup. But it was still excellent.

We passed on dessert today to head back to the office. I couldn't help but notice the place was pretty empty on a Friday, in spite of the large crowds outside at the weekly Farmer's Market. It's worrisome to see crowds down at good establishments. I'd hate to see Oakland lose one of it's strong offerings.

http://www.levende.com/
Price: Expensive
Dining time: Can do a lunch hour easily, but their drinks are worth a linger.
Table size: Adequate - expansive
Posted by The Food Apprecianado