Approximately five years ago, Vo's Restaurant had a kitchen fire. The building seemed mostly intact, and the owner was cheery about the temporary closure. We used to eat lunch there often, and really enjoyed the authentic Vietnamese cuisine. The decor was modest but the food made up for whatever was lacking in atmosphere. We checked back every couple of weeks, but the signs on the door remained. Locked and boarded up, it seemed Vo's was gone forever, another victim of Oakland's iffy downtown economy. There were off and on signs of activity in the years it remained closed, but as every hopeful sign turned into more passing time without Vo's re-opening, in the end we had to assume that the establishment we had grown so fond of would in fact never return.

Imagine our surprise when about si 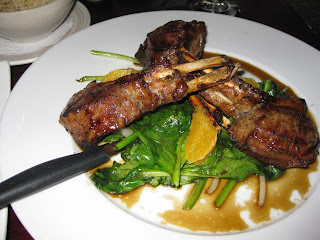 x months ago, the Grand Opening signs appeared, the window paper coverings vanished and most importantly, the doors actually opened again for business. Under the SAME ownership! We went fairly soon after the re-opening, and our first experience was not particularly favorable. While the food was stilll good, it seemed that too much time had passed. The decor was now pretty upscale, which is fine, but the service was confused and the simple fare they once served to perfection, somehow no longer measured up. The place now seemed to lack a direction.

Since we were (are) so fond of the owner, we decided to give it some time and return. We were pleasantly surprised upon our recent revisiting. The service kinks had disappeared and the menu had found it's stride. Since the decor was definitely more upscale, management apparently now recognized its surroundings spoke to a certain clientele. The split personality had faded, and everything came together for a really pleasant dining experience.


We ordered Crispy Harvest Rolls to start. They were flaky, moist and flavorful. The perfect treat to begin a meal. The BH had a Grilled Rack of Lamb (above), which as you can readily see was moist and well-prepared 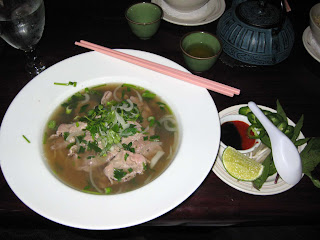 . He now proclaims this his new favorite, having replaced the five-spices chicken he previously ordered routinely. Our PFC (Partner in Food Crimes) ordered the Beef Pho and found it to his liking. Fresh, tender, beef slices (Pho can so often be little but gristle), a solid well-steeped broth, and an abundance of jalapeno, cilantro, Sri Racha and Plum Sauce all completed the meal. A bit critical at our last visit, PFC really felt that Vo's had at last 'hit its stride' and we were all pleased to be able to promise the "Boss" that we meant to return and really mean it.

I myself had the Shaken Beef and it was great. Moist, spicy and tender, the ingredients were first rate and the dish was as pretty to look at as it was to eat. It has been the case over the twenty-five years I've eaten in and around Oakland, that the BH and I have parted with many a favorite restaurant. Some to bad management, some to accidents of bad fortune, others mysteriousl 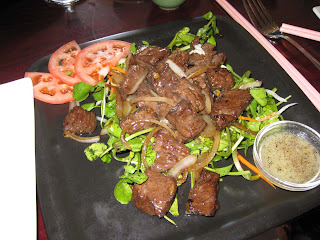 y there one day and gone the next. But never has it been the case that a "returning soon" sign has ever, ever, really meant that a treasured restaurant would indeed return.

To see Vo's Restaurant back is delightful. To see it back with a face lift and an improved menu (in the sense that what was always tasty is now pretty and plated with some artistry) is heartwarming.


Check it out for yourself, and Bon Appetit!

Price: Moderate
Dining time: can be done at lunch within an hour
Table size: Adequate
Posted by The Food Apprecianado