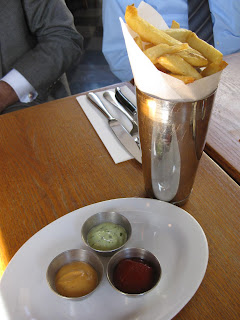 When I was a kid, the corner of West Grand Avenue and Broadway contained an old Hofbrau. It was one of those places that seemed to have been there forever. Serving timeless things like turkey with gravy and jello. Okay, maybe jello isn't so timeless, but still. I remember there was a full bar and people smoked inside, including my father. Yeah, see, now you're getting just how old this place was. Anyone still remember when patrons would smoke inside a restaurant? It was an Oakland fixture, but like so many things in Oakland, it went the way of the DoDo. Extinct. Closed. Gone.

So a number of years ago (around 2003) Rick Mitchell opened Luka's Taproom where the Hofbrau used to be. It retained a lot of the feel of the space, and many of the fifties-era st 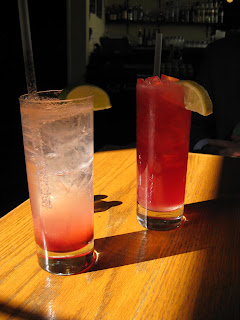 yle fixtures still adorn the large salon / pool room in the back of the restaurant. But the jello was definitely gone. Rick is also the owner of Franklin Square Wine Bar and he is a master of his game. All of his establishments have both an identity and an attention to detail that I find extremely impressive. He's also a really nice guy.

Luka's was well-received on its opening, greeted with excellent reviews and rapidly full of returning patrons. Now, almost seven years later, it is going strong, without having lost a step. An Oakland fixture, it's the place to go for concerts, and a fun and happening place during happy hour (or so I'm told). Actually, the BH and I had to drop by one night while waiting for a flat tire to be repaired and we had a few drinks. Luka's was full and lively and the drinks were really amazing. They have a full bar at Luka's (as opposed to Franklin Square's Wine & Beer only setup) and the bartenders are good! I'm a big fan of the new "mixology" and they mixed up some delicious libations on the evening in question. Even their non-alcoholic beverages are special. Pictured are a Raspberry Lime Spritzer and a Pomegranate Lemonade, which are offered at lunch daily. Yum!

As for the food, we eat there a lot. (They serve ACME bread!) Last week we had lunch there and I decided it was tim 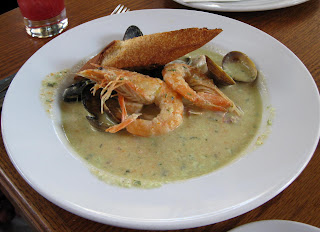 e to include them in the blog. I sort of forgot them because they are such an obvious inclusion. But their number finally came up, so to speak.

We started with an order of their fries. When they first opened, Luka's rapidly got a name for their French Fries with a trio of sauces. They are served in a milkshake tin, with three dipping sauces. The first is a paprika ketchup, spicy and subtle. The next is an herb aioli, sort of a rich herby mayo, but not oily at all. The last is a chipotle aioli. Smoky and rich. All are tasty, but the herb aioli is usually gone long before the other two in my group. 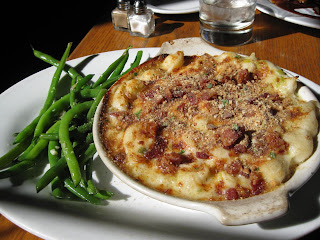 I usually order a salad here and they are great. The beet salad with goat cheese is one of my faves. But today I ordered the Mac N' Cheese as a special treat. It is among the best I have ever had. It's a combination of four cheeses melted perfectly over pasta prepared al dente. Just enough chewiness to counteract the liquidity of the cheese. The top of the macaroni has a baked on crunchy 'crust' of breadcrumbs ~ the dish can be ordered with (or without) bacon, but I highly recommend adding the pig. They serve the dish with side of the most perfectly cooked green beans. Crunchy and layered with garlic. Yum! Seriously, if you like a good mac n' cheese, I dare you not to find theirs perfect. Just like mom used to make, only WAY better!!

My BH ordered Bourride, which was a special on that day's menu. He loved it. I'm not a big shellfish eater (other than scallops or lobster. Does lobster even count?) but I can tell a good sauce when I taste one. They do mussels here daily, and they do them well. Fresh seafood in a lovely clear broth flavored with garlic or onion or herbs or a mixture of several. Delish! The Bourride was chock-full of mussels, shrimp, all of his favorite crustacean goodies. I just gotta say they should invent a full body suit for some folks when they eat a good fish soup, ya know?

Our Partner in Food Crimes was not as lucky. He ordered a steak medium rare. It came medium well. I'm pretty sure the waitress put the order in wrong, they can sound the same, and I think she misheard the order to begin with. I would be just about anything it wasn't the kitchen. She was new, and a little cranky. Not rude or anything, but a bit defensive. I know most of the help and they know me. Usually my order is placed before I can sit down. I like that about a place, when you can feel like part of the family.

Rick came by and asked how the meal was, and our PFC let him know politely that his steak was over-cooked. Rick offered to bring out another steak done more to his liking, but we were out of time for lunch. So he offered us an apple tart with some cheddar melted into it, on the house. We gratefully took it back to the office with us, where we had a nice post-meal sweet bite.

While it's important for a restaurant to serve food well, I have to say it's just as important to be classy about making up for mistakes. Unless you are the French Laundry, no one is on their game every day, so when wires get crossed, the best a patron can hope for is that the establishment will take responsibility for their mistakes, as naturally as they take credit for their successes. I like an owner that's vested, and who tends to the clientele like extended family. Attentive, but honest, and willing to ride out the bumps. Rick is just such a guy.

Luka's serves great pub food and they do it really well. Hamburgers, Salads, Shellfood Soups of every kind. A side of fries. If you enjoy these things washed down by a beer or a great cocktail, then check it out. As always, Bon Appetit!

Dining Time: If you let the wait staff know, easily out in a lunch hour.

Price: Moderate to Expensive (but worth it)

Noise level: really really hard to hear in the main room. If you want to have a conversation, see if they'll seat you in the lounge over lunch.