FLORA - An Upscale Fifties Diner in a revamped Old Oakland 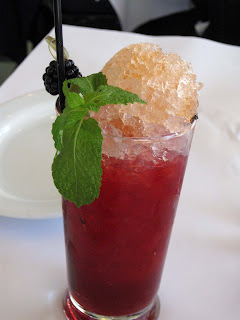 It's been open awhile, so this isn't news to most of you, but this place is a wonderful addition to a thriving Oakland restaurant scene. Situated in the old Oakland FLORAl Depot (complete with revamped original sign) it is a tribute both to Oakland's past and its present. Inside the restaurant is tricked out with a slick and very Urban Chic decor. I'm a big fan of the giant Magic show poster on the righthand wall upon entering. Though the place is tiny, they make the most of the space they have.


If you're going to come, don't just bring an appetite. The bar is rocking and this is definitely the place to have a cocktail. Their mixologists are as good as any I've come across, and that includes the best in Vegas. The specialty cocktail menu includes quite a few treats, most imported from some of the best bars in the world. The Gin Daisy is my usual order, but today the BH and I ordered something call the Blackberry Cobbler, which is a fine concoction of Miller's gin, lemon, blackberry syrup, pineapple agave nectar, orange and curacao. It was basically a really good alcoholic slushie, but uber fresh and not as sugary. The addition of fresh ingredients and experimentation to the world of the mixed drink has been a delicious adventure. I generally don't drink much as a rule, but there are so many delightful concoctions available now that I've become a fan of the modern mixed drink. Never to excess (of course) but am always open to an experience of new tastes, whether alcoholic or merely gastronomical. Today's Blackberry Cobbler was no letdown. Fruity, fresh and fun. 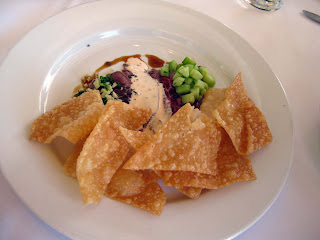 We opted for their Beef Tataki as our appy, and when we ordered we were not quite sure what we would end up with. The description in the menu noted that the dish included garlic, ginger, scallions, and cucumber relish. When the dish arrived I found it a bit reminiscent of a beef carpaccio they serve at one of my favorite sushi restaurants. Lovely slices of mostly raw beef gently seared on the outside, accompanied with this gentle garlic-ginger sauce. The fresh-fried wonton chips were a nice accompaniment. All in all we found this dish really impressive.


BH had the Fried Chicken Fingers, which come with a side of potato salad and coleslaw. I believe they have a homemade Ranch dip as well. I tried the salads and thought they were both well done. He liked the fried chicken, said it was not greasy. I didn't try it myself. 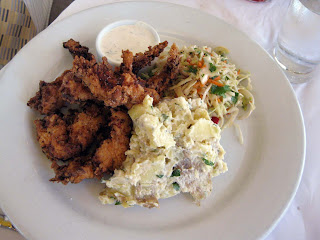 I had the Scallop & Shrimp Louie which is a simple, light salad. They do it well, nothing spectacular, although I have to say they dress the lettuce perfectly. There is nothing I hate more than dry lettuce, or for that matter, soggy overdressed lettuce. The salads here must be hand-mixed, I imagine, because every leaf was coated in just the right amount of a light, airy blend of their champagne vinagrette. It provides a good moist layering on the lettuce which leaves it open to the flavors of the heavier Louie sauce on the seafood. Its a traditional basic done well. My daughter had their Burger & Fries, also a traditional, simple dish done very well. 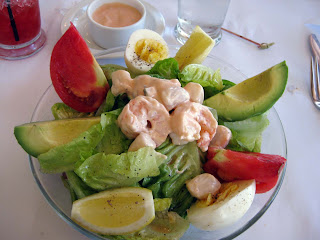 For dessert we ordered the Apple Turnover with Huckleberry Jam, which was the flakiest, airiest concoction ever. This WAS something to write home about. I don't have a picture of it, because it was that good. By the time I returned from the restroom, my family had already dug in and while it was no longer pretty, it was still a "magically delicious" taste treat.

I've been to Flora maybe five or six times now. Every time the food was consistent, and every time there was at least one really standout dish. Today it was the Apple Turnover and the Beef Tataki. On a previous visit it was a wonderful rendering of Fois Gras over French Toast that was unbelievable. There were others, but then again, I did say I usually order a Gin Daisy (or two) so the names escape me. But it's a good thing.

Find the time to check it out, if you haven't already. You won't be disappointed. Bon Appetit.