LALIME'S Berkeley ~ a marvelous night for a Moondance

"And time yet for a hundred indecisions, And for a hundred visions and revisions, Before the taking of a toast and tea." t.s. eliot 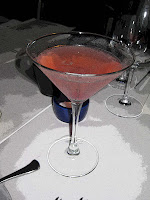 My Better Half and I arrived at Lalime’s a little early for our assignation — set to meet up with a pair of old friends we hadn’t seen in almost twenty years. We were scheduled to meet them at 5:30, but it was about 5:20 when we walked up the ramp to Lalime’s. Though the restaurant wasn’t open for business yet, the staff were kind enough to admit us, seating us at the bar while they prepared our table. The BH and I each took a stool in the bar while we perused the drink menu. I thought a drink might pass the time and calm my unexpected set of nerves. 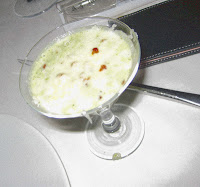 I hadn’t seen Carl since just after my father’s funeral, so I was excited to reconnect. An evening chatting about summer days spent boating along the waterways of the Sacramento River Delta seemed appealing. As we waited, I ordered myself a treat called the Leopop and the BH ordered something they had titled the Spicy Frenchman. My Leopop was a mixture of Raspberry Vodka and a splash of Limoncello in ginger ale, with a touch of Absinthe to give just a nice hint of licorice. A twist of lemon rind finished it off. The strongest flavors in the drink were this wonderful lemony /licorice combination, but it also had a nice after-hint of sweet raspberry. The Better Half’s Frenchman consisted of St. Germain, Hanger One, spiced pear and lime juice. It was tangy but not bitter, featuring a fairly herbal flavor profile.
By ten-minutes-to-six our guests had still failed to materialize, and I was beginning to think something wasn’t right. Though I had a small lingering hope that we’d merely gotten our signals crossed on the timing, no one was answering the phone at their home so it was beginning to appear they had forgotten altogether. I grieved for a moment at an opportunity missed.
At this point we decided to enjoy the evening as a date night. Now seated at our table, we continued to enjoy our drinks, while forging ahead with our orders. We let the waitress know that while our company might appear in the next ten minutes or so, we were no longer certain they were coming. It was about 6:10, and there just wasn’t any conclusion other than we’d gotten our wires crossed. While I had confirmed the date weeks ago, my friend Carl is one of those free spirits who needs a bit of prodding to be in any given place at a specific time. I chided myself that knowing this, I should have called again closer to the date, in order to remind him of our upcoming engagement.
I figured we could reschedule in a few weeks or so. Make it an opportunity to try another on my list of dinner-only restaurants in the Oakland / Berkeley area. Bright side. For those of you who follow my blog, this Carl is the same guy who used to spin pizzas for me back in the glory days of Granata’s Pizzeria.
The staff was amazingly patient throughout my little drama. Kind even. The BH and I had now ordered our hors d’oeuvres, and I’d ordered a second drink. I was still a bit of a stress puddle. The Leopop is both delicious and calm-inducing. Nice how food can calm us, entertain us, help us pass the time, even when time seems boundless because we’re waiting for something big. My Better Half and I continued our meal. The staff reassured us that if anyone joined us, there would still be time to order them dinner. I really appreciated the sensitivity shown by the waitstaff on this visit.
The waitress brought us an Amouse Bouche from the chef, which was a tiny shooter of an absolutely delightful pancetta & broccoli soup. It was thick and hearty, clinging tenaciously to the glass when I tried to drink it down. Delicious. Chunks of broccoli and buttery bacon were swirling together in this soothing emulsion of salty goodness. Really made me want more. Funny how beginning to eat can calm a person. I was beginning to let go of my disappointment, allowing them to clear it away along with the tiny bits of chunky soup that still lined the inside of that tiny glass. 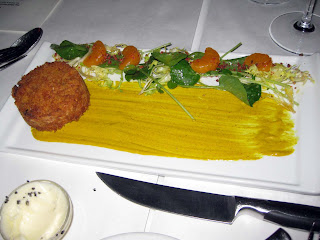 The BH and I might have over-ordered a bit. Anxious to try the food at Lalime’s for what felt like ages, we couldn’t decide which of the offerings we wanted the most and so requested several. The first to arrive at our table was the Maine Lobster Cake. When I hear the word lobster, something primal happens in my head. Lalime’s take on the dish was a lovely, moist, patty of lobster — crusted over with a delicate, savory breading.
The seasonings in the meat were such that each bite became somewhat aromatic when taken in the mouth, its flavors flitting about the palate like tiny little butterflies, each carrying a different scent or sensation. Blissful. On the platter was a selection of various ingredients meant to be mingled in each or any bite, to enhance the taste of buttery lobster. When added, the Satsuma tangerine was a hint of cool citrus breeze; the fennel added a slightly licorice air to the bite; the yellow curry aioli gave its bites a fatty smoke aftertaste. Any or all could be infused with the other ingredients, allowing the various components to sneak across the palate in a cacophony of flavors. Every mouthful of this dish was sheer perfection.
I looked up from my dish to view again the large plate glass window that fronts the room our table is situated in. I had been checking occcasionally throughout the early portion of our meal on the chance our expected dinner companions might still show up. As I look away, my husband says “Isn’t that Carl in the window?” I see someone peering inside, but with the sunlight behind his figure, I cannot be sure. Yet only moments later I hear the familiar “Hey Ange” and Carl comes bounding down the stairs into our dining room. He’s that kind of guy. When Carl arrives, he makes an entrance. I think he picked it up from hanging with my father. That or they were just kindred spirits all along. He’d been working late and had indeed gotten his signals crossed, just as I had suspected. But we had managed to connect after all. I could hear Van Morrison’s Moondance begin to play, source music for the flood of memories in my head.
Carl joined us shortly before his lovely wife arrived to bring us to four. We began to catch up over a beautiful plate of Hudson Valley foie gras, which was a messy oily madness of delicious tasty goodness. A perfect dish for this messy crazy delight of an evening. The Chef’s take on foie gras was a two-fer: one version a chilled foie with sauterne, accompanied with a moussed raspberry gastrique; the second seared foie with a carmelized granny smith apple and a black-pepper caramel.

Actually getting a bite of the foie into one’s mouth proved a challenge. It was messy to eat, but each forkfull was a stellar variation of flavor profiles. The natural browned crunch of the apple mingling with the black pepper caramel. The raspberry over the chilled meat a nice pop of sweet and savory. Both these things drizzled over the meat made it sweet, but lightly so. The savory fatty taste of the meat itself still present and asserting itself. Delicious.

Once they had cleared the foie we ordered a bottle of wine and shortly received our mains. Everyone but me had the Rack of Lamb. You can see it was pink in the middle, perfectly done with that roasted fatty outside that comes naturally in the cooking process. They seemed to love it. I had a dish the chef called a Prime Rib of Pork. It was a thick slab of moist pork with a honey mustard glaze. The meat came with a glorious mustard fruit chutney, and some nice little roasted rosemary tom thumb carrots and pickled beets. 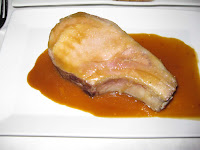 The pork meat was extremely moist (difficult with pork) and the tang of the glaze kept it juicy. Actually made my mouth water as I ate it, which is a nice trick for pork. The pickled beets were likewise tasty.
At this point Carl ordered a Sambuca, a primarily licorice-flavored liquer,. Sambuca is an Italian tradition, it is meant to be lighted while in the glass, with three coffee beans in the liquid, then once the flame has gone out, consumed while still hot. The scent of the licorice, and other ingredients becomes as much aroma as liquid in the glass, and taking a sip is something of a multi-sensory experience. It was delicious, and brought me crashing back to years prior and drinks with my father in Granata’s bar. 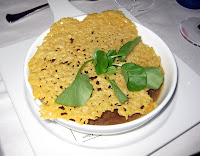 For dessert, we had a Lemon souffle, which was a light airy lemony breeze of a dish, puffy and airy as a souffle is meant to be. We also had a Pot de creme, tonight the flavor was butterscotch with a hint of salt across the top, which really played out well in the mouth. For any of you who have yet to try a caramel or butterscotch pudding with a smattering of rock salt, get to it. It is a spectacular flavor profile and I can guarantee you will enjoy it. The last dessert we tried was the Brandied chocolate ganache cake which was easily one of the prettiest desserts I have ever had. The artistry of the little trees of chocolate laid over the cake itself. Brilliant and inspired and delicious. 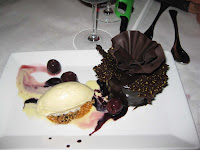 The meal was a success in spite of its rocky beginnings. We reminisced, sharing joint memories of those days on the water with dad.  We cerainly ate well, with Lalime’s definitely living up to and beyond its reputation. The thoughtfulness and patience of the servers with our at times wacky party, was really generous and allowed the evening to unfold into a memorable one.
So definitely check it out.  I will be back myself without question. Bon Appetit!