I-SQUARED ~ Aromatic rose petals dance to the Song of Scheherezade 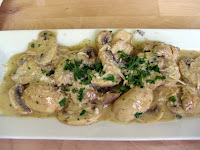 On this particular Friday in March, we wanted to try a new restaurant, and fortuitously discovered that I-Squared had recently opened for lunch. It has been on my “dinner wish list” for quite some time, but lunches are much easier to manage in Oakland, since I no longer spend my nights here in the town of my birth.


I’m not sure what I was expecting. I had read multiple Yelp reviews recounting that the establishment features Italian and Iranian food — that was definitely a combination that intrigued me. I am Italian. I love much, if not all, of the flavors found in Middle-eastern food, so it stood to reason I would enjoy a meal at I-Squared, right? Sudden visions of spaghetti-kabobs or pita-bread pizzas began to dance in my head. While we certainly didn’t find anything quite so unusual, I think it is fair to say we were not disappointed. 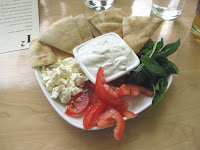 We began with two appetizers. The first was an order of sauteed mushrooms. These platters set the tone for the meal. Neither was anything fancy, no platters of Italian-Iranian fusion here. Just a lovely (and good-sized) platter of buttery sauteed mushrooms. There were several types, all of them rich in texture and flavor and all of them topped off with grated Parmigiano Reggiano. The dish and the flavor of it, the richness of the cheese, the herbed butter, the splash of lemon across the top of the dish, all these things reminded me of my childhood. Simple Italian food done well is as good as anything on the planet. 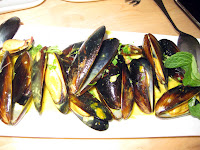 The other appetizer was a dish called “Noon-o-pane” - I can only assume it is Iranian, and it was good. It is a dish of yoghurt, feta, basil & tomatoes, accompanied by a tiny stack of pita bread. One makes a sort of Iranian vegetarian fajita. Tasty.  My BH also tried their mussels, which were properly briny and sat merrily in a broth redolent with spice and flavor.

As usual, the four of us shared much of what we ordered. We had all arrived with a substantial curiosity about the food at I-Squared. Would they prepare their dishes more as Italian, or would their emphasis be Iranian, would it perhaps be something of both, a new brand of food somewhere in between. 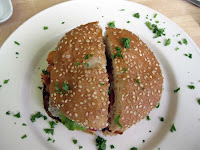 Over time, we’ve found that the best way to experience a large variety of food is to order as much as possible and then share a bit of everything. I ordered the Salmon Burger, which seemed neither Iranian nor Italian, but which sounded very appealing. It was soft, on a feathery delight of a bun, the flesh of the fish pink and perfectly inviting. There was a lovely dill sauce on the burger, along with some eggplant and a slice of tomato, which I found unexpectedly magnificent. Normally eggplant is not something I seek out intentionally, but on this occasion it meshed perfectly with everything else on that plate. 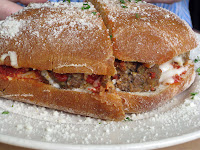 Two of us ordered the meatball sandwich. It was a classic meatball sandwich, big globes of meat atop a roll and slathered with marinara — unremarkable in its presentation, yet completely unforgettable. The seasonings were authentically Italian. Basil, onion and tomato, the sauce thick enough to cling to the meat and the healthy sourdough roll on which it was served. It was so good, I just couldn’t put it down. It wasn’t really my order, but I would take a bite of the slightly runny, cheesy tomatoey goodness surrounding the large moist chunks of meatball and tell myself it was my last. Then I would do it again. I loved the flavors and textures that went with the actual eating of it. The whole sandwich was another exercise in the perfection of simplicity that I would say is a hallmark of I-Squared. This big submarine of a sandwich with an abundance of well-spiced simple flavors represents the home-cooking emphasis that they have here, their food is expressed in the comforting familiar tongue, rather than the artistic and exotic one. 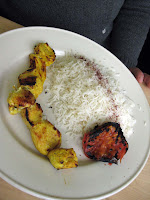 Another of us had the Chicken Breast Kabob. This of course was a more Iranian dish, but its presentation was also in the home-kitchen vein of good flavor, great balance and a hearty helping of love straight out of the can. The meat of the chicken kabob was well-seasoned and not overly dry on the stick. I am less familiar with the home-cooking of Iranian grandmothers but I know when meat is properly done. This meat was moist, with a nice zesty-lemon acidity, the addition of saffron and other Iranian spices seemed a proper flavor profile for the dish, and I found it appetizing.


During the meal our waiter, who I am fairly certain is also one of the owners, (a pair of Iranian brothers – one host, one chef), was solicitous and extremely forthcoming about what they served and why they chose to serve it. It felt like back in the day when my father or grandfather both knew the owners of every restaurant at which we dined. We were enjoying our meal while chatting about the various dishes and expressing our delight at the tastiness of it all, when our waiter asked if we would care for any dessert.
We ordered a pastry, since the Grad Student so rarely allows me out of a restaurant without feeding her sugar demons. Oh to be young and slender with the metabolism of a twenty-five-year old!  Since there were four of us, we also ordered a slice of their Tiramisu. Sadly, our waiter soon returned with apologies that the pastry dessert (I think it was an apple tart of some kind) had not turned out properly. He apologized profusely, saying their new pastry chef was telling him that it was unfit to serve. We expressed our willingness to take the risk anyway, but his fear of the pastry chef’s artistic ire won out. He said he would prefer to make us up something special. “Trust me” he said, and so we did. Given the rest of the feast we had just partaken it hardly seemed much of a risk at all. 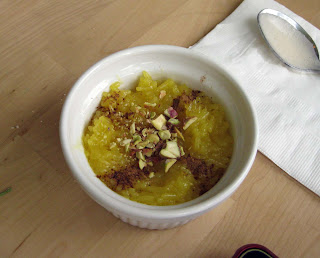 We were shortly presented with a lovely rice pudding, a traditional Iranian dish called simply “Sholeh zard.” He said it was a recipe that had quite literally been passed down from his grandmother. It tasted like she had made it herself. I found it aromatic (the scent of roses wafts up into the nostrils before one can even take a bite) and appealingly sweet, but not overly so. It had a lovely starchy consistency, and the saffron gave it a beautiful color. Rice puddings of any kind have always been a favorite of mine, perhaps it is my peasant ancestry rising to the fore.
The Tiramisu was similarly delectable.  This is a dish I often do not order, its composition and consistency so often all over the map.  I found their version to be the perfect consistency, soft like pudding, with its sweet notes well contrasted with the taste of chocolate.  The waiter explained that the balance of this dish is achieved by using fresh espresso, made daily next door just before being added to the dish.  The family owned a coffee business before opening the restaurant, so it is their own blend and they obviously took great pride in the concept.  This was a really good tiramisu, so they had good reason to be proud.
The meal was a delight and we will definitely return. They seemed proud and pleased that we were pleased, which I find is usually the mark of a good restaurant. The act of sharing your culture with others, with something as basic as a good meal can be life-affirming. It is on days like this I can appreciate how good it is to live in a country where so many ethnicities come together to bring a smorgasbord of flavors to the table. Lucky lucky me.

Check it out for yourself, and Bon Appetit!

Dining time: easily in and out in an hour
Noise levels: was quite enough when were were there, but the walls are hard and there is not much fabric, so my guess is that evenings can get loud -- 2 bells?
Service: delightfully informative, strong sense of pride
Cost: Inexpensive to Moderate