Lake Merritt has always been at the center of my known world. Anchoring my surroundings, a constant landmark. As a child, I attended Our Lady of Lourdes grammar school, a small, private Catholic school situated at the Eastern end of the Lake. The geography of my education necessitated my walking by this lake several times daily, either while on my way to recess with classmates or while walking to and from school with smaller groups of friends. My young companions and I would quite often watch the brave souls who ventured out over the water in the tiny sailboats they rented at the boathouse with envy. We wondered what one needed to know in order to operate one. It looked very hard, and like driving a car, very adult.

At some point I found out that the Boat House offered courses in sailing during the summertime, and one year when I was perhaps twelve or thirteen, I convinced my mother to let me enroll in these lessons upon the Lake. I wanted to be one of those people flying across the smooth, blue water of Lake Merritt in one of those tiny magic boats. Master of my destiny. 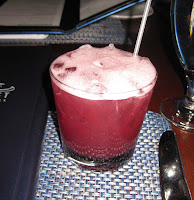 Years later, it was with great curiosity and anticipation that I watched the renovations of my childhood boathouse take shape. Over the past several years we saw it vanish, to be replaced with something much newer and shinier. I heard it was to be a restaurant. Huzzah!

After what seemed like eons, Lake Merritt at last re-opened the facility as the completely refurbished Lake Chalet Restaurant. This presented me with a unique opportunity, that of revisiting the scene of many happy childhood memories and sampling another new restaurant. It was not long before the occasion presented itself to celebrate the birthday of a co-worker at the Lake Chalet. 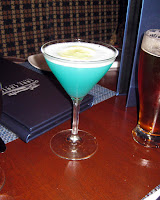 There were a large number of us, so we could try, well, almost everything. Since it was a “special occasion” (yeah, yeah, I know, Tuesday is a special occasion when it comes to me ordering a fancy cocktail these days) we ordered drinks. Something happens when you “un-coop” the hard-working masses. They gotta cut loose.
My drink was a specialty cocktail entitled “Blueberry Smash.” It was both fruity and easily drinkable. Not so strong that it had to be sipped, yet enough liquor in it that the honey and blueberry juice mixture wasn’t cloying to the palate. Perhaps that was the splash of lemon. It tasted of whiskey, which I find I kinda like now that I spend a week or so every spring in New Orleans. The bartender used Buff Trace Bourbon, a brand I’m not familiar with, but which I enjoyed. The pomegranate and blueberry juices blended nicely. Back in the day, one might expect the concoction to be more like the pre-packaged ‘mixed drinks’ that tourist-attractions such as Lake Chalet would have served years ago. Not so. These cocktails were definitely a step up.

My Better Half ordered something called, fittingly enough “The Blue Lake.” Though I found it’s color a tiny bit ominous (it was preternaturally and intensely blue) the flavors worked nicely together. The BH is very fond of coconut, and this was a nice mixture of the milk of that large tropical nut, some rum, blue curacao and pineapple juice, with a nice dash of fresh lemon to balance the sugary pineapple. If you like coconut, you’d definitely enjoy this drink.

My daughter the Makeup Artist was in town and so she’d joined us, since the birthday girl is also a good friend of hers. MA had a drink they titled Weed & Lemonade, which was a less complicated take on a Long Island Ice Tea. This version consisted of Jeremiah weed sweet tea vodka and fresh lemonade. So the tea flavoring came from infused Vodka rather than the multitude of alcohols that are often combined to make that “tea” flavor in a Long Island.

To start off the lunch we ordered some appetizers. A Cheese board, of course, and the selections were good albeit skimpy in portions. I did love the additions of fruit coulis and honeycomb, but I am so over a skimpy cheese board. What does it really take to provide enough to share?

We also had a platter of their Warm Housemade Hummus, an appetizer selection accompanied by pita bread, cucumber, red bell peppers & mixed olives — and this one was sufficient in quantity to whet the appetites of most of our crowded table.

At least two of us had the Green Pea & Ham Hock Soup, which while delicious, was positively radioactive in its appearance! There seems to be a theme at Lake Chalet— the management does not back away from serving a dish that is overtly bright in color. The soup of creamy peas, and chunks of yummy bacon was lite on the palate. My favorite twist was the choice to add charred Brussels sprouts. There they were, floating atop the green of the soup like the tiny boats that we watched float on the Lake those many summers ago. I found this soup delectable despite its strikingly green appearance. 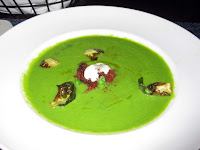 I think it was the BH who enjoyed a bowl of the New England Clam Chowder. Not a huge fan of peas, he chose this soup over the Pea with Ham Hock. It was loaded with creamed chunks of seafood, as classic a white chowder as could be expected.

The restaurant offers a mini prix-fixe menu called the “workday lunch” special. For only $19, one can have either a Caesar Salad or the New England Clam Chowder, one of five different entrees and a mini serving of dessert. This was a nice option that many of our companions opted to take advantage of. 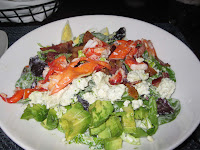 I had the Main Lobster Cobb, a delectable mass of baby greens, smoked bacon, boiled egg, avocado, blue cheese, and herb ranch dressing topped off with lobster meat cracked fresh from the shell. It was refreshing yet hearty, a great combination of fresh ingredients and traditional flavors. There is something about well done bacon and egg, no matter the style of preparation, that unfailingly appeals to me when combined for the eating.

My BH had a beautiful half crab, which he thoroughly enjoyed.  It was a large serving, with plenty of drawn butter.  As long as the meat is fresh and sweet, and there is plenty of  melty butter, what can possibly be wrong about fresh crab? 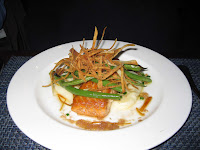 Two other dishes worth noting were the halibut special, pictured here.  It was beautifully cooked fish, and our PFC thought they did a great job with it.  The fish was flaky and moist inside, with that nice crust of broiled meat to give it a contrast in textures.  My Makeup Artist child tried the mushroom pot pie, which was beautiful to look at and according to her, super tasty.

By this point we were all a little drunk and a lot full, but it was a birthday, so we had to order dessert. I had a Creme Brulee and a bread pudding sitting atop a delicious caramel sauce, both of which we shared with the four at our end of the table. While neither was remarkable, both were tasty and a nice sweet bite to end a good meal. 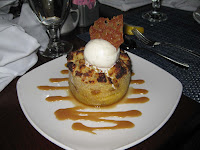 This is a “high end” tourist restaurant, but I would say the food is good if not spectacular.  Much better than one might expect at a place so obviously geared to tourism. Gotta say that competition for the scant tourist money during the recession does tend to improve the offerings laid out for those of us who are still managing to eat out.

Check it out for yourself and Bon appetit!

Service: good
Table Size: adequate plus
Noise: three bells - LOUD
Dining time: probably could get out in just over an hour

UPDATED April 15, 2010:  I dined here for lunch with my parents.  The pea and ham hock soup still among maybe the BEST soups I have ever had.  However, my lobster cobb salad had watery dethawed lobster meat on it. It was the sorriest lobster meat I have ever seen.  Since the first salad had some of the best lobster meat I have ever had, completely fresh, sweet and delicious, this may have been some bizarro aberration.  I didn't complain because I didn't want to spoil my parents nice time, but it was almost shockingly bad.  On a good note, the cheese board was really an upgrade.  Big fat slices of cheese and a healthy side of every condiment provided.  Will dine there again some time and report on which experience was the more accurate.
Posted by The Food Apprecianado