MOUNTAIN WINERY - a perfect meal of a Summer's evening 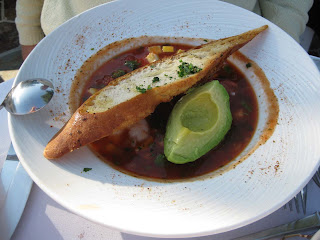 To be clear, one cannot simply dine here. One has to be attending a show to make a reservation. But if you live in the Bay Area, and you like outdoor venues for music, this is the perfect place for a date. So with the obligatory "you can't eat here just cause" warning out of the way, I enjoyed our dinner so much the other night that I thought I'd write it up for anyone who hasn't been here and who might be on the fence.

When one dines out before a show, unless you make a point of finding a nice "pre-event restaurant" off-site, one usually doesn't expect to find much in the way of fine-dining at a theatrical venue. There are a few welcome exceptions, but a concert usually means a sandwich of some sort, perhaps chased by a beer. What it almost never means is an amazing meal at the venue itself. 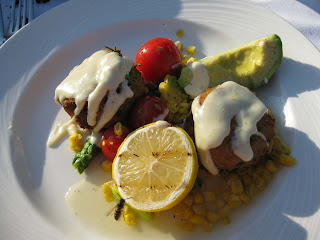 At Mountain Winery, the meal offered at their main restaurant is served "pris fix" and is the diners' choice of items from a three course meal at the lovely Chateau Deck overlooking the Saratoga valley. The dining area is on a large terrace/deck affair that affords one an absolutely a breath-taking view. The meal is your choice of several items, one appetizer (a variety of soups and salads), one main, and a dessert. The portions are exceedingly generous and the price is a flat $55 a person. The BH and I enjoyed our meals for all three times we dined there over the summer, and the concerts were just amazing.
So the meal I'm sharing in this blog was our last of the summer. We began with the starters, I had the ahi poke salad and my husband went with what they called a Seafood Gazpacho. I had it on the previous occasion and it was delicious, more of a gigantic seafood boulliabase than what I would call a gazpacho, but it was appropriately chilled and extremely refreshing in the oppressive summer heat.
The next course was for me a Dungeness Crab Cakes (I am a sucker for any kind of crab cake) over sweet corn and asparagus. I have to say that I will be heartbroken when the summer ends and we find ourselves only remembering the sweet corn days of August. Sweet corn forming a puddle of tasty flavor under my food. Sigh. My BH gorged himself on a dish called Sauteed Rock Shrimp. His dish was a complicated affair of mushroom and spinach saute over cheese tortellini with a lovely lobster sauce. Mine a light fluffy cake in an airy bed of sweet corn and summer-savory sauce.
We ended the evening's meal with our dessert choices. I had the basket of berries, my BH the chocolate mousse cake. My berries were fresh and sweet, and the basket is this really decadent concoction of caramel that is hardened, but soft enough to chew without losing a tooth. 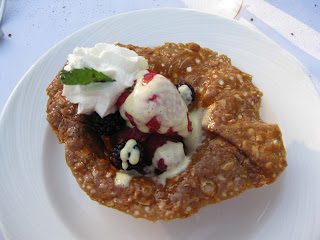 The chocolate cake was a good mousse cake, soft, fresh and chocolaty. The desserts are remarkably tasty for being produced all at once. That's the amazing trick of the dining here. Something like a hundred tables all turned over at once. They manage it all and the food is still good. But between the view and the apres-dinner entertainment, this is one meal that can't be beat.
Reservations can be made on the website, once show tickets have been purchased.
http://www.mountainwinery.com/
Price: $55 prix fixe
Dining time: They are on a show deadline, so not an issue. They will get you out in time to see the show.
Table size: Cramped
Posted by The Food Apprecianado No comments: 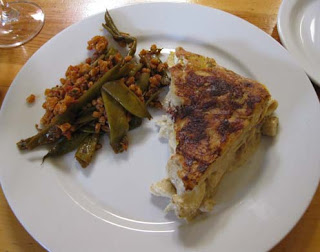 Last week my BH talked me into going back to Dopo, which is a popular and very small little Italian Pizzeria and Wine Bar located on Piedmont Avenue in Oakland. When it first opened it was maybe four - five tables. After undergoing a fairly lengthy expansion into the space next door, the restaurant is positively cavernous at fifteen tables or so, with several more available outside when weather permits. And the place is always bustling, if you want a table at lunch, get there before noon.

There is a reason for its popularity. Dopo's does a limited menu of pizzas, salads and soups, and though the menu is not extensive, what they do, they do very well. The meal we ordered on this occasion began with a slice of Pistichio, which looks like a variety of frittata or quiche. It seemed a bit heavier and more rustic than the frittata I grew up with. Today's version was a combination of zucchini and parmesan and egg. It was filling, but not quite as flavorful as my grandfather's egg dish. I was trying to avoid eating too much pizza, but it was a mistake. That's really the reason to come here. 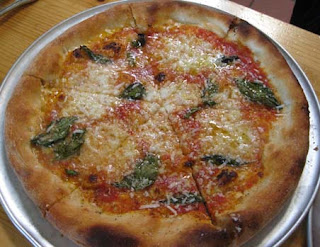 After my husband downed a bowl of the Tomato Corn soup, which is quite tasty, we moved on to the main course.

We had ordered two pizzas. The first was a Mozzarella di Bufala. It arrived piping hot, with the cheese bubbling on the surface of the ever so perfectly thin layer of tomato sauce. This pizza is unusual in that it isn't the standard doughy bread slathered in Contadina (that's a tomato paste folks). Everything about it is delicate. It's flavors are much more delicate and well thought out. This may be the best thin crust pizza on the planet. We followed that standard with an new variety on the menu, a blending of Proscuitto, Speck and Potato.

This pizza was well-done, although in my opinion not quite as good as the simple but delicious di Bufala. Speck is apparently a kind of juniper-flavored Italian smoked ham that is generally served in thin slices. Isn't surfing the net while eating so 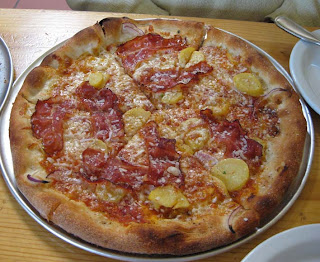 much fun?? The mixture of this ham and the baby red roasted potatoes was pleasant and I thought pretty good. My BH really enjoyed the combination, but our PFC really preferred the di Bufala. I enjoyed both, but have to say I did prefer the first. There is something crispy and simple about it, the way they always do it just so, that makes it one of my favorite dishes.

We completed the meal with a few glasses of wine. I had a nice red Montepulciano, and our PFC enjoyed a rose, also from Montepulciano. No dessert or coffee today, although I will say that when I have had their lattes in the past, it is really unique. They serve the hot drink in a glass mug, which makes it almost impossible to hold. It also seems to cook the milk further into the coffee, in a way that without adding any sugar, brings out the sugar in the milk and sweetens the drink naturally. It may or may not be deliberate, but once I had wrapped the burning hot mug in my napkin so I could get it to my lips, I found it delicious.

All in all, this is a completely reliable restaurant. What they do is consistently tasty, with little variation in presentation and no big mistakes.

Dining time: Pizza takes awhile to cook, so typically a bit more than an hour