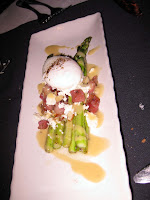 After our day at the mall, the BH, the Grad Student, the Makeup Artist and I were set to dine at Essanay Café, a fairly new eatery in historic Niles Canyon in Newark. The Makeup Artist had to bow out, after too much visiting with friends she was tired. But the three of us who were still standing made the reservation and ate at Essanay.

For those of you who might not know its history, the Essanay is named for George Spoor and Gilbert “Bronco Billy” Anderson (S & A) the two heads of the Chicago film studio that was among the first to shoot in California. Their original location in Chicago proved to have too much inclement weather to shoot all the time, so they opened a branch in Niles in about 1910. They liked the weather and the look of the locale. In 1914 Chaplin was brought in to the studio as a property, but he left after a little over a year. He didn’t like the studio’s aesthetic and wanted more of a say in his own films. But to date, Niles remains in the collective consciousness as “that place where Chaplin shot so many movies.” Regardless of its film history, the city of Niles is a charming, quaint little stretch of lovely smack in the middle of Fremont. 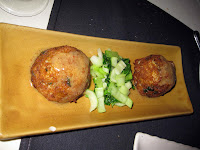 The Essanay Café from the outside looks much like it belongs in another time. Small and rustic, it is exactly the sort of establishment that belongs in Niles, with it’s original wooden structure intact, and it’s picture windows facing along a street that still looks as though horses should come marching down it pulling buggies. Quaint squared.

The food was really impressive. A nice combination of down home and upscale, without really hitting either too hard. They don’t serve hard liquor, so we all started with variations on a champagne cocktail, a nice fizzy opener to a hearty repast. After I downed my champers, I had a glass of Merlot that was delicious. 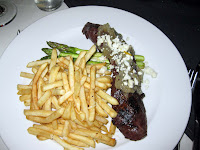 We began with two appetizers. The first was a fresh asparagus prepared with bacon and croutons. It was magnificent, the asparagus tender and the flavors delicate but hearty. A nice blend of butter, seasoning and the perfection that is bacon.

The other appi we tried was Essanay’s take on crab cakes. Not as perfect as the asparagus, as they were a bit on the salty side, but they were good nonetheless. The patties had a nice fluffy consistency, and the crab itself was sweet and tender. I think if I hadn’t just had the world’s best crab cakes at Sea Salt still ringing on my palate, I would have been more impressed with these. They were a solid effort and definitely worth eating. 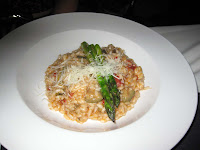 
The steak was a stellar 10 oz strip, cooked rare. The meat was a good cut, so the fact that they knew how to make a good rare steak was indeed a plus. Done nice and bloody, the steak was tender, juicy and savory. The meal came with garlic fries which were slim hot and delicious. There is nothing quite like a perfectly turned french fry to whet the appetite. Though I’ve had it before, the blue cheese ladled delicately over the steak made for a delectable dish. The BH had their game hen which he found likewise moist and well-prepared, it’s crispy skin nestled around the bird in a golden glow, accompanied by several more stalks of that perfect spring asparagus.

Since it was a special night we ordered desserts. The two we chose to split were a chocolate cake recommended by our hostes, who said it was the owner’s mother’s recipe. The slice was really moist, and came accompanied by a lovely mint-chocolate-chip ice cream. Our second offering was a “s’mores” prepared as a creme brulee. It’s bottom layer was graham crackers, layered over that was a covering of marscarpone cheese, and cremy marshmallow, with the final layer being a healthy topping of melted chocolate. 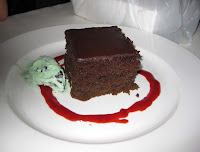 It was a unique meal, prepared with love and so unlike the standard fare offered in most of the high-end chains that pass for restaurants here in the quiet little suburb I call home at nights.

If you are in the Fremont neighborhood, you really ought to come by and check it out. They have a gorgeous back bar where live music is featured often on weekends, and it’s very Disneyland and yes, also quaint. See for yourself, check it out. Bon appetit! 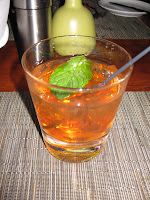 My eldest daughter was visiting from New York City, so we’d decided to do a girls’ day out and spend it in the Westfield Shopping Center in San Francisco. After a few hours of vigorous, conspicuous consumption, we were tired, so we opted to take a break and eat something.


My sister-in-law came with, as did my niece. When my New Yorker said she was craving actual Mexican food (which is apparently impossible to get in NYC) Sis-in-law suggested we check out Zazil, the Mexican place upstairs in the Westfield mall. Upon arriving at the top of the escalator, we found that Zazil was closed. Permanently. A victim of the recession. Apparently, as the hostess for Lark Creek put it “it’s pretty hard to compete with high end Mexican food in a mall, especially in a City that is known for really good and inexpensive Mexican food.” 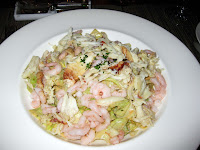 She was right, of course. Even I will balk at lavishly priced tacos, since that is a comfort food. In my mind some of the more abundant home-style foods should come with a reduced price tag. There are exceptions, like the pizza at Dopo or Boot & Shoe, or even the mexican tapas at Tamarindo. When it’s an elevated comfort food, one can always justify paying a little more, but generally, high-end Mexican food in a mall is hardly a recipe for success. 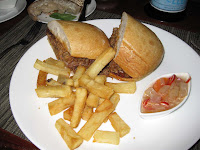 So when we found ourselves at that moment, hovering in the doorway to Lark Creek Steak, we opted to go ahead and eat there. We were all pretty hungry and after all, shopping IS hard work!  I started with a Sazerac, something to take the ache out of my legs and back. It was perfectly blended, a nice whisky flavor with just enough sweetness and the suggestion of licorice wafting up from the absinthe used to rinse the glass. I was pleased. My sister-in-law loves a Margarita. Theirs was done using a nice silver tequila, overall a crisp citrus cocktail that I found refreshing.

My NYC Makeup Artist ordered something called the “Black Island,” it was a Johnny Walker black label with a hint of lavender. It was evocative of elsewhere, and pretty tasty. Overall I’d say that much to my surprise, Lark Creek has a kick a$$ bar.


I had plans to dine out again in a few hours, so I wanted to keep my appetite intact. With that in mind, I opted for a Shrimp Louie salad, which seemed the perfect solution to my hunger, while allowing me room to manage a heavier meal later than evening. It was a good Louie, simple with a great dressing, and nice, crunchy lettuce. Fresh fresh fresh. I have to say fresh is much more the norm than it was when I was a kid and everything was pre-packaged and pre-made, even a lot of the components of restaurant food were pre-fab. I am, after all, a member of the TV dinner generation. 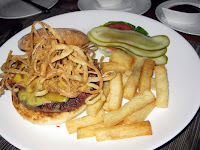 A few of us tried the Garlic potato soup, which was also simple and quite good. I loved the taste of it I tried. My NYC daughter and sis-in-law tried the Cowboy burger, which was a nice, fat traditional burger. It came with a healthy serving of french fries. Standard American fare but good. My niece had the Caesar salad. The grad student had a pulled pork sandwich.
The food at Lark Creek Steak was steady comfort food. It was nothing unusual, but what they offered was done really well. The drinks were really outstanding. So, if you’re in the mall, and you need a bite, go for it. Check it out, and Bon Appetit!