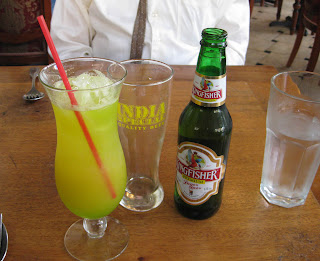 What is it about bread that makes me go weak in the knees? Bagels, English Muffins, Sourdough. All of these fantastical starches have been woven into my DNA since childhood. I used to dream of being locked into the Lakeshore Deli (an old-world delicatessen my grandfather used to frequent and on whose proscuitto and ravioli I was raised) and left to consume all the bread and cheese I could manage to swallow. That was my childish idea of heaven.


So it isn't a surprise that I might find a restaurant named "Breads" of anything intriguing. When Breads of India first opened, my food gang and I tried it within a week or two of it's unveiling. This most recent visit was a little over a week ago, early in the week. Thought it deserved a revisit for the blog.

Breads of India is one of those smallish family places you really want to be good. Everyone is very nice, and in this economy one never wants to see a place near empty. But it 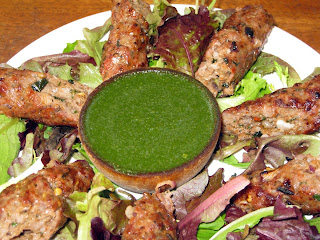 was, as so many eateries are these days. Unfortunate sign of the times. The restaurant's decor is extremely quaint. It looks like a 70s ideal of an Indian Restaurant in a film.

We ordered pretty safely. Beginning with drinks. Better half had a "Goan Dream" a cocktail of vanilla vodka, midori, orange and pineapple juices, while our Partner in Food Crimes had anIndian Beer, Kingfisher, which oddly enough has been outsourced to this country to be brewed & bottled. Irony that. We all shared a Lamb Shish ke Bob, which was nice. Large bite-sized rolls of lamb barbequed and meant to be dipped in a nice light herby mint sauce. I thought the meat was juicy and the smoky flavor very appealing.

Next I had a spicy Chicken Vi 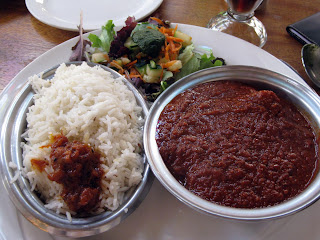 ndaloo, along with our PFC who is a fan of spice as well. The BH ordered the far less spicy Chicken Masala. I didn't taste the Masala, but I imagine it was fine. My vindaloo was not spicy enough, but it was appetizing. Not amazing, but appetizing.

Lastly there is the Bread. These breads are by far the best thing this place has to offer. Our naan was hot from the oven and smothered in garlic and butter. Each bread comes with a generous slatering of whatever topping or spice it is billed as featuring. We ordered plain and garlic naan, both of which went well with the meals. Nothing quite like fresh hot chewy starchy almost pizza dough to dip in a sauce. Still my idea of heaven. I did have 'garlic' replay for the balance of the afternoon, since it was doused in uncooked garlic which can play a bit of havoc on the digestion, but it was enjoyable in the eating at least. 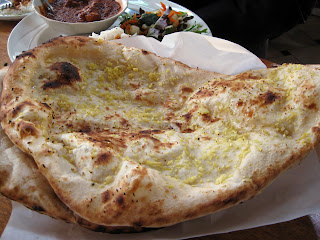 The food here is decent, like good home cooked food. But it isn't great. Rice is just a little dry, salad is maybe the tiniest bit limp. The meals are just okay. But like I said, I really liked the bread.

Check it out, and Bon appetit!

CITRON - a little Class on College 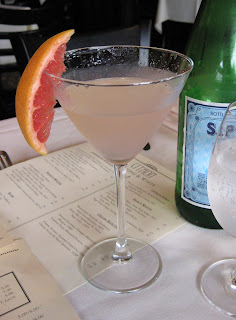 A week ago Thursday we met our youngest again for lunch on College near her school. On this occasion she had suggested we try Citron, an established white tablecloth joint between Taft and Lawton. It was as described. Very old-world looking, but light and airy at the same time. Personally, I found the retro style somewhat charming. While I love the new 'slick' wood and metallics of most of the newer places, I found this just as inviting as any other establishment.

Our daughter had been there once for a function as an intern at a big law firm and really enjoyed the food. She said some of her young friends found the place too "dated." I would disagree.

We began our meal with drin 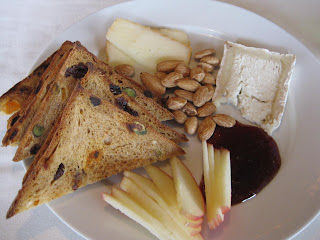 ks. Hubby and I both ordered something called an Eloise Gin Blizzard, a lovely and complex blend of Hendrick's gin, fresh grapefruit juice, Diablo Elderflower Syrup all topped with a champagne float. It tasted like bubbles and light and had the nice bite of a grapefruit taste without the bitter. This was another really successful cocktail. I have had great success with fruit gin goodness and this was no exception. The BH and I both really enjoyed them. They came with a lovely little 'amuse bouche' of creamed humus and olive oil over toast. Delicious.

We began our lunch with a first course of cheeses. I have become a total cheese hou 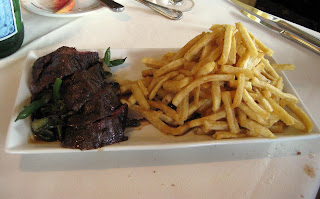 nd in recent years. The sampler boards one can order now offer such a variety of so many good blends and types of cheese that it's really opened my eyes to a world of flavor. We ordered a Petit Basque (menu described it as farmy - rich, semi-hard) and a Truffle (soft truffled goat). They came accompanied by a lovely nutty fruit bread toast (delicate, not overly chunky candied fruit or anything of that sort) and some fresh apple and jam.

While we munched on our cheeses, my BH also had a soup course. It was a splendid Maine Lobster Bisque, slathered in tarragon creme fraiche.

For our main, BH and the kid had the Grilled Hangar Steak and French Fries, which come with a lovely helping of romano beans, fresh carrots and beef jus. It also came with a healthy stack of some really tasty french fries. They were billed as the "best anywhere" and I have to say that though they were good, they were not as good as Cesar's garlic fries. There is definitely a war of good fries on around here, and so far Cesar is still King of the Kitchen in that respect. 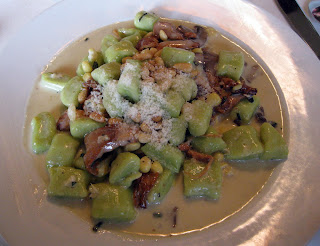 I had the Spinach Gnocchi with wild mushrooms and white corn. It was perfection. The gnocchi were light as air and so was the sauce, a sage brown butter blended with heavy corn creme, toasted pinenuts and regianno cheese. The mushrooms were so meaty and flavorful, this was a delicious dish.

We finished the meal with a Pear Huckleberry Tarte. It had a light, flaky crust, and was filled with the softest ripest pears imaginable. Party in my mouth & dessert perfection. We were all in agreement on this one. It was so good in fact, that it was gone before I remembered to take a picture~!!

If you like a meal with a slight old world presentation, and by old I mean classy and clean, with a strong sense of leisure and comfort in dining, then this is your kind of place. I found the flavors and menu well thought out and the mixologist was first rate. Check it out!

Dining time: a bit leisurely, but probably possible without desssert or drinks
Noise level: well padded and not at all echo prone -LOW
Table size: adequate